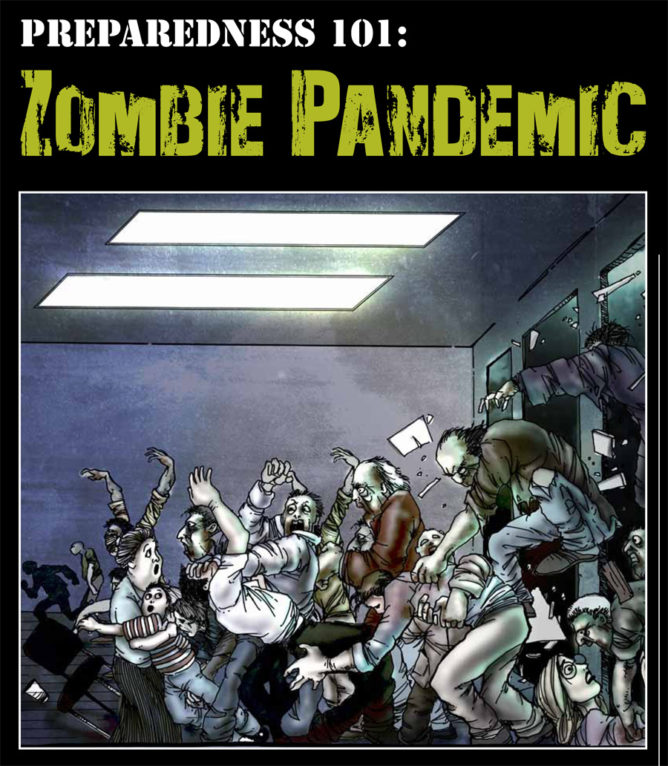 Excerpt from Preparedness 101: Zombie Pandemic by the Centers for Disease Control and Prevention (2012)

I am currently reading To Our Friends (La Fabrique, Semiotext(e), 2014) (by that I mean that I started it yesterday evening and will finish it today!), the ‘sequel’ of The Coming Insurrection (see 2009 article). Even though I was expecting no less from the Invisible Committee, I remain mesmerized by the sharp precision that it uses in its description of today’s political situation; but I will write more about that soon in a forthcoming article. In the meantime, I wanted to dedicate a text about a point spotted in the first chapter of the book. It indicated that, in 2012, the American Federal Health Institute, also known as the Centers for Disease Control and Prevention — note the precautionary plural of “centers,” already telling in its speculative emergency strategy — released a short comic book foreseeing a ‘zombie virus’ in the United States. Entitled Preparedness 101: Zombie Pandemic, this comic claims to consider zombies as an entertaining excuse to a generalized prevention program for (all?) the American population. We could ponder a moment on the necessity that Western governments seems to currently have to produce graphic novels in order to distillate their violent policies through an apparently benign medium (see the graphic novel developed by the Australian secretary of immigration to prevent Pakistani migrants to attempt moving into the country), and we could balance them with others, conceived against these very same policies like the one created by friend Tings Chak about Canadian migrant detention centers (see past article).

The argument I would like to make is however different here. As explained in a previous article entitled “The Zombie Is a Human You Have the Right to Kill” (July 2013), I was reflecting upon an article written by friend Gastón Gordillo (December 2012) about the imaginary provided by the film World War Z (Marc Forster, 2013) that was depicting such a ‘zombie pandemic.’ The argument that both Gastón for World War Z and the Invisible Committee for Preparedness 101 are making — and others have made in the past — is that beyond the biological contamination that the zombie carries, what is really at stake in this figure is political contamination, and the revolution that comes with it. In this regard, it cannot be innocent that the zombie is the Haitian creole figure of a dead slave whose soul never went back to Africa; the fear of the insurgent black body is still operative. Similarly, it cannot be innocent that in both World War Z, and Preparedness 101, the protagonists are middle class heteronormative white couples with kids (WWZ) or a dog (P101). By “cannot be innocent,” I do not mean these ‘creative’ decisions were necessarily made consciously, but rather that the imaginary that was used to produce these works is one that corresponds to the dominant normative narrative.

Although the Centers for Disease Control and Prevention attempt to dilute their discourse at the end of the comic (“the pandemic was just a dream (i.e. the usual “just kidding”), what is really coming is a big storm, we should all get prepared,” etc.), the fact is that what we see throughout this short volume is other humans attempting against the protagonists’ survival, the message is therefore clear: trust only yourself, everyone is potentially contaminated and your survival depends on your preparedness against others. We find here the usual strategy of fear as a mean of governing (listen to my Archipelago conversation with Joseph Masco to think of it in the context of the Cold War), the other being the quintessential pathogen. We can however go further and also see a governmental message (the CDCP is a federal institution) warning the part of its population that benefits from the status quo (see above to see how it pictures it) against the potential scenario of an insurrection.

One thing that we can concede to World War Z is its rupture from the cinematographic genre. The zombies it depicts are fast and agile, when the genre usually picture them as slow and clumsy; a behavior that the Invisible Committee does not fail to attribute to those who are subjected by capitalism, and not the contrary. It cites the suburban home owners and the salary men, but we could also think of one of the first scenes of Fritz Lang’s Metropolis (1927) showing groups of workers walking slowly with their head down to their daily labor. The narrative behind the figure of the zombie is one that attempts to describe a supposed human nature, a hobbesian one where “man is a wolf to man” that would emerge in the time of crisis. It would be just as ideological to think of a human nature that would be fundamentally benevolent, in fact, it would be ideological to think of a human nature at all. However, what is for sure is that capitalism has the propensity to put individuals into competition and rivalry (through the idea that there would a fixed quota of available jobs for example), when a strong rupture of these logic sometimes shows a strong solidarity between people. For having experienced it, I am thinking of the days that followed hurricane Sandy in New York for example, even though it is clear that the rupture was not strong enough to dissolve societal hierarchy, as described during back then (Two Manhattans and Inequal aid in Brooklyn and the Queens).

I will finish this article in the same manner than I did for the last one about WWZ‘s zombies, the narrative means to which we have access (in this case, WWZ and P101) constitutes a well-known method of narrative when there are two antagonisms involved: it is an essentialization method that consists in absolutely separating the good subjects from the bad ones (the zombies). A reverse narrative method — that is a narrative from the point of view of the ‘zombies’ — could be found as much in Emile Zola’s Germinal (1885), Gilo Pontecorvo’s Battle of Algiers (1966), or Peter Watkins’s La Commune (1999). As P101 finishes, “The end [of history]?”

Integral version of Preparedness 101: Zombie Pandemic by the Centers for Disease Control and Prevention (2012):