Léopold Lambert – Paris on September 17, 2018
If you enjoy articles of the blog, have a look at The Funambulist Magazine!

A first version of this article was published in French on Mediapart (September 17, 2018).

On July 3, 2018, Aboubakar Fofana, nicknamed “the wolf” for his loneliness, died. This young Black man had been stopped by a squad of CRS (a branch of the French police) in the middle of his neighborhood of Le Breil, a close banlieue of Nantes in France. After a moment of panic; he was killed by a bullet shot from close range from one of the police officers. This murder is to be considered along with the politics of existence of the banlieues. 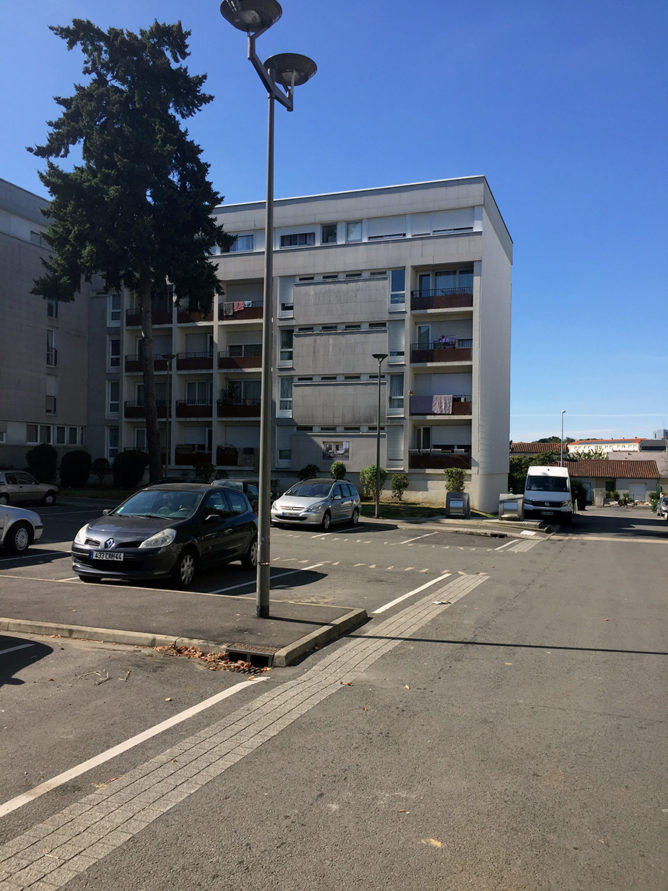 The horrible dimension of this story comes as much from the tragedy of a 22-year-old life, violently interrupted in terribles circumstances, as the sinister familiarity that it triggers in us — this familiarity was pointed out by Aboubakar’s cousin himself when I met him last Friday. The first component of this familiarity is the one that consists for media to simultaneously describe the scene basing their story solely on the police narrative, and contribute to denigrating the victim’s past and personality to suggest a certain legitimacy to his death. The second is a scene of crime deserted by the investigators in such a way that any additional items later found will be deemed unacceptable. Similarly, the testimonies of the neighborhood witnesses — I met one who had done a declaration at the IGPN (the police of polices) — does not appear in the investigation; some people who had filmed fragments of the event were even intimated to delete their videos. It is also the murderer’s narrative that claims self-defense before admitting having lied et since then claiming an accident. Following him in this version, the Nantes court charged him (before releasing him) with “volontary violence having lead to death without the intention to trigger it” instead of first-degree murder. Finally, it is the familiarity of the victim’s family’s dignity that, despite all, called for an appeasement in the neighborhood during the revolt described below; an additional responsibility imposed onto those who do not have the luxury to only represent themselves. His cousin’s discourse is also conciliatory: “it could have happened to anyone,” “we’re not saying anything else than one cop killed him.” 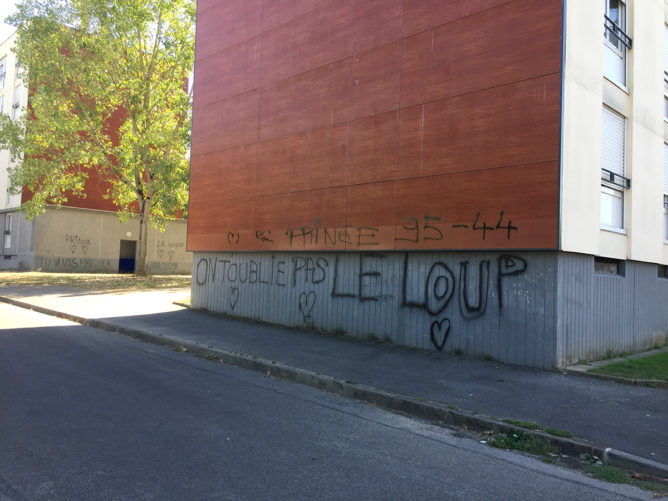 Words of dignity here again; nevertheless, it is impossible not to observe how the relation to the police is primarily a racial and geographical one. People of color who live in the banlieue experience an immensely more precarious situation than the one experienced by white people in the city-centers of France. This is what, beyond local solidarities with Aboubakar’s family, makes this murder inseparable from the banlieue youth’s condition (in particular young Arab and Black men) and what made them revolt (joined by a few militants from the ZAD) against the police that came back with much reinforcements during the week that followed the murder: stones and burnt cars/trash cans against teargas, flashballs and a multitude of police trucks. 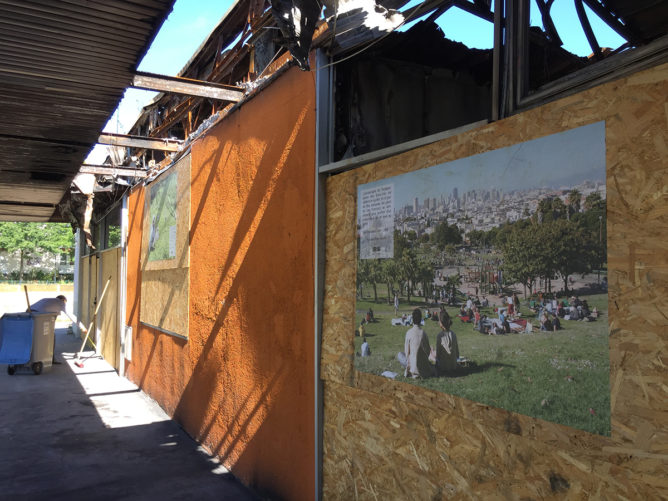 When encountering the mini shopping mall of the neighborhood that has been partially burnt during the revolt, one thing strikes: on two wooden panels temporarily placed where windows used to be, a photo of a Mission Dolores Park in San Francisco, which has evidently been glued again after the fire. It might be derisory to talk about it in the context of this article, but the striking contrast it presents might say something about the politics experienced by the Breil neighborhood. 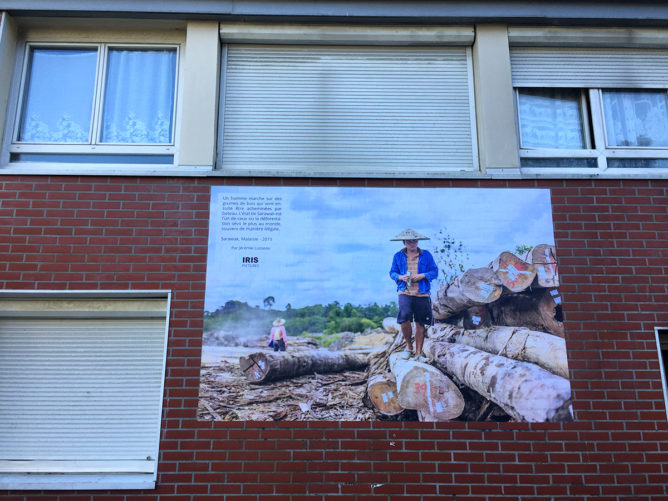 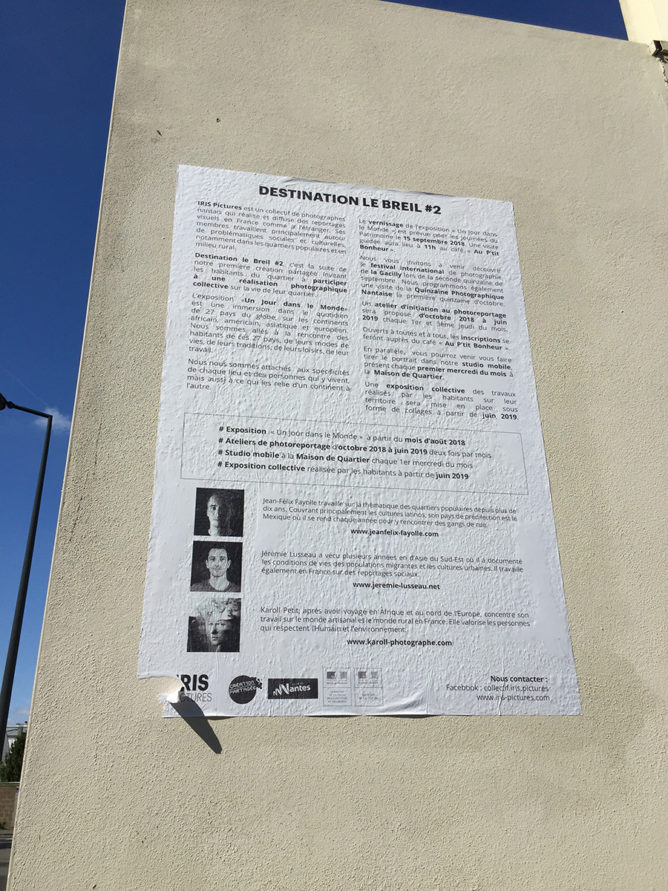 This photo is part of a series one can find on numerous building walls in the neighborhood, in more or less large format. They show various scenes of life in numerous countries of the world. A few posters tell us about where they come from and confirm what was guessable: it is a project by a Nantes-based white photographers’ collective who do not live in the neighborhood. A visit on their website tells us that they are great travelers whose interests have to do with “the human” and “marginalized populations,” and that some of them collaborate with NGOs. The displayed photos in Le Breil therefore appear as the markers of an economic privilege and the liberty of global circulation, which can only appear as a provocation in a neighborhood where unemployment reaches 40% and where very few people can afford to travel. Furthermore, the photos of so-called “marginalized populations” from various places in the world seem to suggest to the inhabitants that their situation is not as bad as they may think. “We know a thing or two about poverty; they should not show it to us but rather to the people of the city center” says one of the two residents who welcomed me in the neighborhood. Of course, it is useless to take it out on these young photographers. After all, they are only a few of these numerous artists in France to whom municipalities have asked to lead “cultural animation” missions in the banlieues, without ever challenging the fact that very few of these neighborhoods are given the means to develop their own projects. The greater responsibility comes back to the authorities that organize such exhibitions whose endogenous character from the neighborhood reveals the paternalistic dimension of the relation that the municipality has with it. 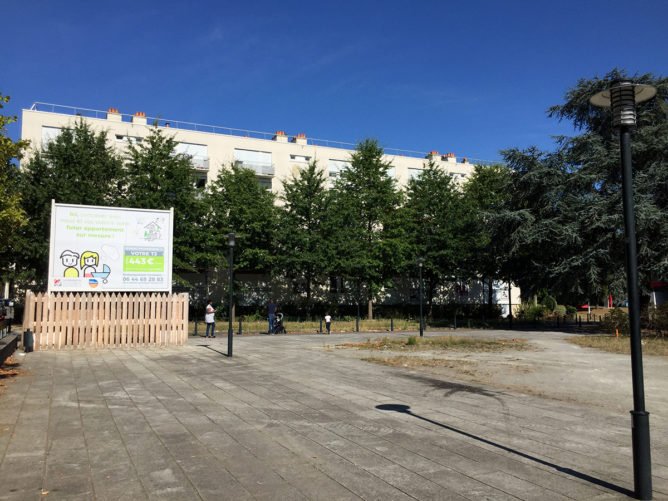 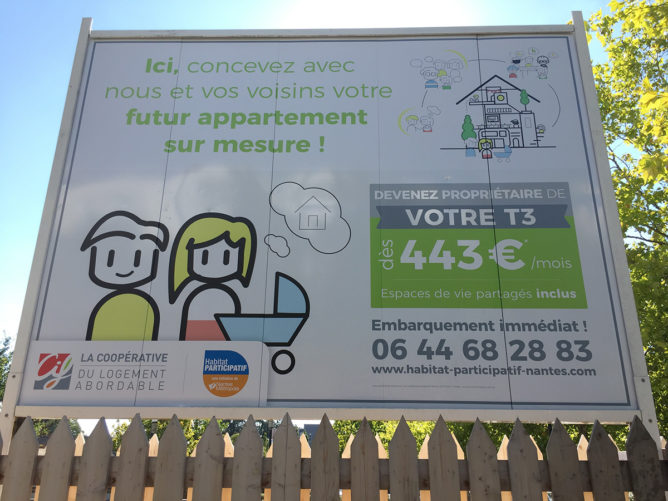 Another thing strikes when reading the photographic exhibition’s brief is the implicit concept of participation with the neighborhood residents. This concept also appears in large letter on a billboard by the Affordable Housing Cooperative in the context of the “Participatory Housing” initiative by the Nantes municipality. “Here, design your future tailored apartment with us and your neighbors” read the sign. “Here” designates the sole square of the neighborhood. It has been left abandoned by the authorities (probably in anticipation of this project), but the mid-height walls that remain are used by several young men to gather and chat. The simulacrum of democracy that these so-called “participatory” real estate operations thus allows the transformations to which the neighborhood is subjected to claim a certain legitimacy. 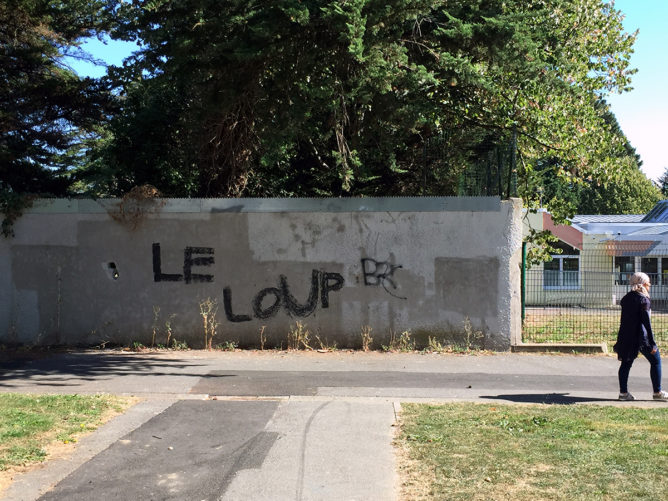 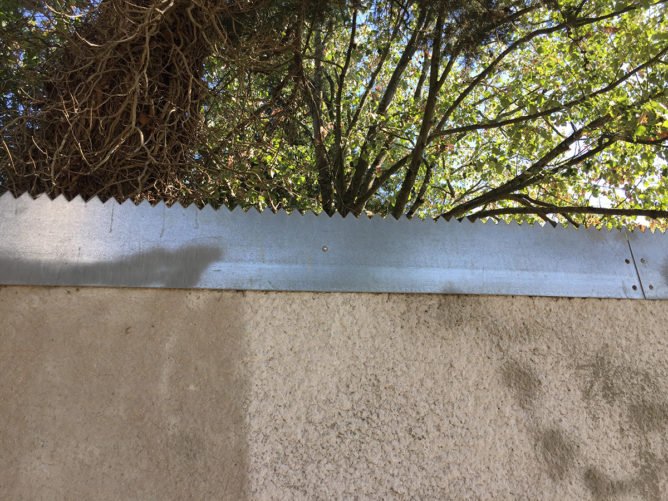 In the 1990s, it was a group of housing units built in the 1960s to host families of harki (Algerians who have fought the Algerian Revolution on the French colonial side) that had been demolished to be replaced by houses mostly owned by white middle-class people. During the so-called “renovation” of the neighborhood in 2014 — “just a layer of fresh paint on the facades” says one of my hosts — a football fields and two basketball courts were destroyed to leave room for new buildings, thus reinforcing a density deemed already too dense by the residents, and reducing the amount of spaces of sociality. What is left are only poorly-maintained grass leftover between parking lots and buildings, a small football field “for the kids” and a few grass squares in front of the kindergarten. One could have had imagined an access to the neighboring sport complex but the wall that separates it from the neighborhood (recently challenged with hammers by the local youth) has been renovated and a blade of metallic teeth has even been added at its top, thus preventing anyone from climbing it. 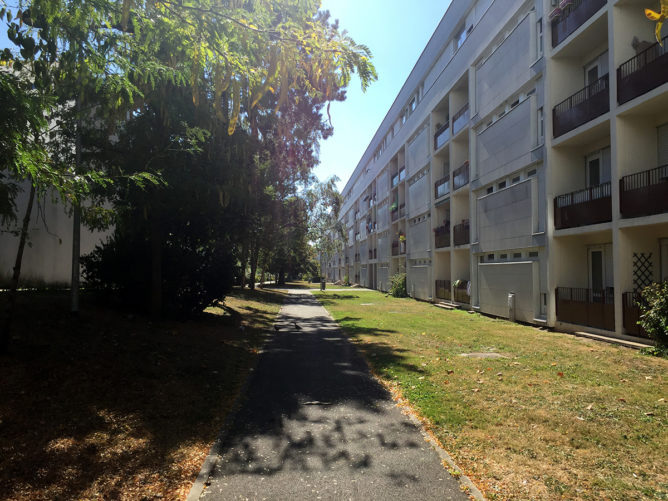 In the banlieues, potential spaces of gathering are considered as threat to the so-called “public order.” It is therefore not surprising that authorities would attempt to get rid of them even if, of course, other reasons than the securitarian ones might come into play. The price of real estate in Nantes for instance is experiencing a dramatic increase. The part of the city where Le Breil is located is not close to the city center, but it is nonetheless subjected to the consequences and various real estate operations are to be expected in the neighborhood. The fetish of the so-called “participation” is often one of their incarnation, which can also allow implicated architects to deresponsibilize themselves from their roles in this capitalist violence since they convince themselves that they bear a certain democratic character.

Of course, a certain amount of considerations developed in this article do not seem to reach the same gravity than the one that characterize the murder of Aboubakar Fofana. However, it is crucial to consider what we in France keep calling sordidly “une bavure” (euphemism for police mistake; see note below for more considerations about this term) in both locally and nationally (and internationally) and both historically and presently. The political conditions that allowed such a murder to occur are the same that allows for the investigation to be botched and that no one in Le Breil has heard anything about it since July despite the promises of a second autopsy, gun expertise and reconstitution. It is also worth noting — as I heard it from the residents — that France’s political, economic, cultural, and social centrality on Paris may be also at work in activism whose language, political perspective and representativeness are monopolized by Paris-based movements — this article is not an exception. What happens in Le Breil, that is, the murder of “the wolf” and what followed it, but also the political conditions of existence of this banlieue neighborhood should therefore mobilize us all who claim to struggle against police violence. As always, this mobilization should simultaneously be specific — only pressures seem to push forward a judicial case that is otherwise lost in advance — and general, as this murder belongs to a system whose dismantlement cannot be negotiated.

To consult videos and reports of these last two months in Le Breil, as well as to follow the political life of the neighborhood, you can follow Breil Jeunesse Solidarité.

Note about the term “bavure”: although this term is commonly understood as simultaneously a saliva dribble (literal translation) and a police blunder (with the same degree of euphemism), a genealogy of the concept reveals that it comes from the historical police branch “Brigade Aggression Violence” whose acronym is BAV and that was particularly active in France during the decolonial struggles of the 1950s. As such, the colonial dimension of what a “bavure” is makes sense.