Léopold Lambert – Paris on May 31, 2016
If you enjoy articles of the blog, have a look at The Funambulist Magazine!

Image above – Street art by Dip Social Klub at Nuit Debout: “The police violence you are currently experiencing, it exists in the banlieues for more than thirty years.” “Homage to all the victims of police crimes.” “The dance of suffering.”

In an interview with Christina Heatherton and Jordan T. Camp featured in their book, Policing the Planet: Why the Policing Crisis Led to Black Lives Matter (Verso, 2016 and on Archipelago), Naomi Murakawa states the following:

The terminology we use betrays the notion that policing at its core is acceptable, that it only becomes a problem when things go awry. But let’s be clear: there is no such thing as racial profiling. To say the police are profiling suggests the possibility that there could be colorblind policing. There never has been, and the social order in which we live means there never could be. “Police brutality” is also a hollow term, in the sense that all police interactions, by definition, occur under the threat of brutality.

This last passage, as well as the rest of the interview with Murakawa, and the rest of the book, is extremely helpful in understanding the current spectacular violence we are witnessing in France in the interaction between the police and strikers/demonstrators against a legislation project that would (de)regulate labor to the detriment of workers. An important portion of media outlets and politicians have insisted that police officers were the victims of many actions of “casseurs” (literally, “breakers”) organized against them. This discursive stigmatization allowed the French government to order the legal exclusion of nine people from the area where a police demonstration was being held on May 18 to protest against “anti-cop hatred” — the police here lost an opportunity to protest instead against the long extra hours they have been asked to provide since the January 2015 attacks. Although this order was broken in courts — the suspicion against these nine persons to organize actions against the police was proven to be founded on nothing — we can see how the imaginary provided by most press outlets, associated with the executive power of the ongoing state of emergency, can deploy its arbitrary violence on targeted bodies.

Despite this dubious reading of the situation, these recent weeks have certainly provided numerous images of what we have gotten used to calling “police brutality” (“muscled interventions” as most press outlets like to call them): teargas shot in a crowd or straight at targeted people, sadistic use of the baton, strangling arrests, people pushed onto the ground, etc. Even Turkish Prime Minister Recep Erdoğan whose police crushed Occupy Gezi and are currently sieging Kurdish cities, saw an opportunity in the situation to publicly condemn the ongoing police violence in France (May 30, 2016).

However, we can bring two additional layers of critical reading to this situation. The first one is about the bodies targeted by this “police brutality,” and their territoriality. Because of the deep historical anchor of unions in France, and the imaginary they carry (and probably their internal politics), the organized worker struggles are often dominated by white bodies and tend to deploy themselves in city centers. As a recent graffiti by Dip Social Klub for Nuit Debout reads, “The police violence you are currently experiencing has existed in the banlieues for more than thirty years.” As written in several past articles (see the “Paris Banlieues” section), the police action in the banlieues in France is indeed systematically an antagonizing one, finding its historical origin in the colonial policing of indigenous bodies. The creation of the BAC (Brigade Anti-Criminalité) in particular can be traced back to such genealogy. In Enforcing Order: An Ethnography of Urban Policing (Polity, 2013), Didier Fassin recounts and analyzes his field work among the BAC and attests to the conscious or unconscious racism — an overwhelming majority of its officers are white — at work in their arbitrary daily interventions in the banlieues. 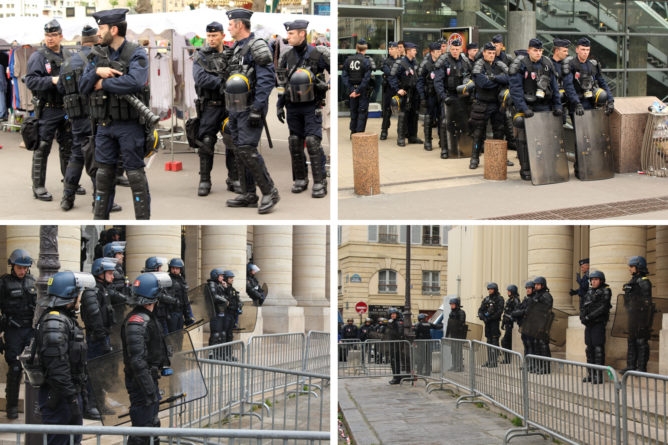 Nevertheless, reading Murakawa’s comment and, beyond it, her work in general, helps us to think further about something that, all things considered, is a surprise to no one. Even the French government, found recently guilty in court for having its police leading identity control, discriminating non-white bodies, argued in its legal appeal that this discrimination was based on the idea that such controls must be applied to “a population that appears as potentially foreign.” As Murakawa states, “there is no such thing as racial profiling.” In other words, there is nothing that the police can be blamed for, independently from the structural ideology that it enforces. Murakawa continues by stating that “‘Police Brutality’ is a hollow notion.” Indeed, when we see police officers beating up a demonstrator with a baton, we tend to look at the spectacular violence of the assault itself, and not as much at the very fact that the baton itself is (materially and legally) manufactured to be at the police officer’s disposal for its usage. Even its non-actual-usage is itself a form of violence, says Murakawa, since it materializes the “threat of brutality.” The very function of the police as an agent of violence — the ethical and social legitimacy of this violence is not mobilized in this definition of its function — is therefore the one that should be challenged, rather than its spectacular occurrences. Spectacular violence creates inequality in the outrage it triggers, since it involves an observer, which itself involves a territoriality of visibility — in this case, French city centers, inhabited by the middle and upper classes. ‘Normal’ violence, on the other hand, occurs in a territoriality of invisibility where no one can afford to be in the role of the observer, except, perhaps, anthropologists doing their field work! Such territoriality needs to be understood both literally (the banlieues for instance) and figuratively. The fact that so many of us do not see the inherent violence in the presence of armed (often male, often white) bodies patrolling our cities is indeed itself a process of invisibilization that simultaneously reveals and reinforces inequalities.

It is therefore the entire police state apparatus that needs to be challenged. In this regard, Murakawa, as well as the We Charge Genocide organizers, also interviewed by Heatherton and Camp for Policing the Planet, advocate for police abolition. Just like we talked about in the conversation about prison abolition with Nasrin Himada (see issue 4 of The Funambulist Magazine and/or Archipelago), an abolitionist process should first and foremost be conceived for what it is: a process. This simultaneously means that such a political program finds no interest in replacing a state apparatus by another one — on the contrary of the immediate questions of alternatives often raised when the word “abolition” is mentioned — and that, as such, it is not required to be fully implemented in order to be practiced on a daily basis at the scale of individuals. We should therefore take very seriously such a political program and take part in the reflection that is engaged around this topic.