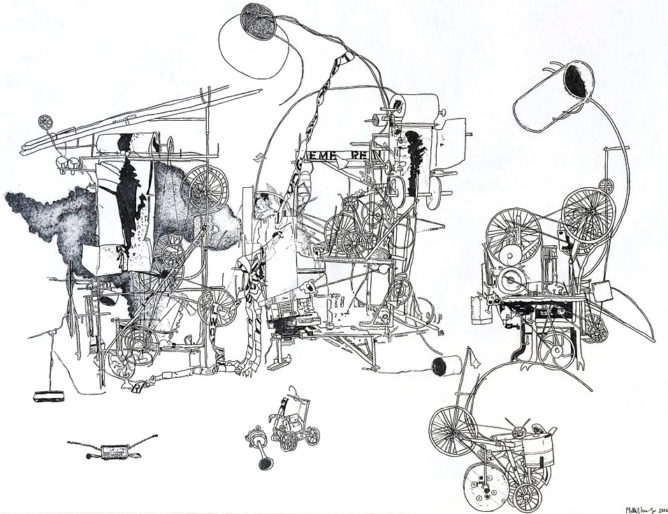 Léopold Lambert – Paris on February 10, 2015
If you enjoy articles of the blog, have a look at The Funambulist Magazine!

I am currently traveling for the purpose of Archipelago and did not find the appropriate time to write so far, so before some fresh texts here is a small editorial I wrote for the Italian journal Tourette:

The machine is a vessel of our fantasies. When we think about it, an entire mechanical imaginary is invoked and, with it, the manifestation of our fascination and fear. The image we have of the machine is so rich and ambiguous, that we would probably gain from going back to what it really is, beyond the mechanical aesthetics to which we associate it.

A machine is essentially an apparatus that allows the production of an output through a successive series of steps, each one triggered by the previous one. This is why a machine is always conceived in the inverse order of its function. In other words, in order to conceive a machine, we start from the final product and retrospectively create the steps that lead to it.

The consequence of such a definition is that a machine can only be considered as such if its production is known and desired in advance. This way of operating is therefore a transcendental one, which leaves no chance to…chance, and imposes to the process the conditions to its foreseen achievement. We can say that, for this reason, the machine designer and all his avatars (including architects) are technocrats.

The 19th century luddites were factory workers, whose ‘rage against the machine’ that replaced their labor, drove them to destroy their objects of misery. Their rage might have been misplaced insofar that it took for object the machine itself, rather than the technocrat himself. Nevertheless, the implacable logic that gives its essence to the machine can also be a legitimate target. After all, as the Futurist fascination did not fail to understand, the most paradigmatic machine might be the machine….gun.

Can there be luddite-designers? Isn’t the very action of designing in profound contradiction with the one of destroying machines? We could legitimately think so. On the other hand however, we could try to imagine integrating this contradiction within the logical function of the machine itself. The function of self-destruction integrated to some machines might be an all too literal example of such integration. Perhaps, we can invent a more subtle contradictory mechanism that would lead us to the oxymoron we are seeking: a luddite-machine.