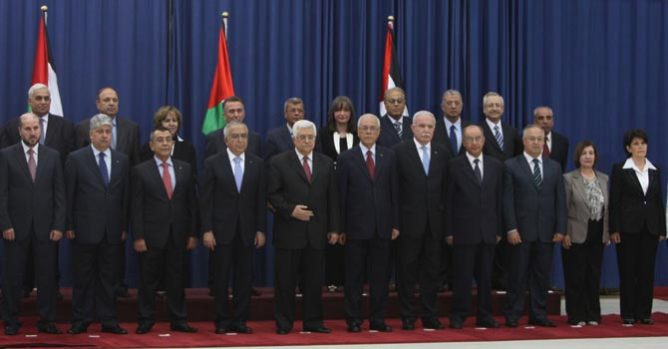 The Palestinian government of Ramallah in May 2012

In the recent days, both Sweden and the United Kingdom parliaments moved ahead to give recognition to a State of Palestine. What sounds like good news is actually not one, regardless of the good or bad intentions of the members of these parliaments. One can actually interpret this decision as a wish from Western countries to ‘wash their hands’ over what they still call the Israeli-Palestinian conflict, precipitating a future that has very little to offer, rather than the profound recognition for the legitimacy of the Palestinian cause. The recognition of a State of Palestine understands the latter as fundamentally separated from the Israeli one. It recognizes the pre-1967 borders as being the ones that bases the territorial separation of both states with the probable admission of a special status for East Jerusalem, which already indicates a fundamental failure in this scenario — one could think that the capital of this new state would rather be displaced to Ramallah. The “two-state solution” is certainly not a solution as it claims to be. Furthermore, as I wrote in the past, we should be fundamentally cautious when encountering the notion of solution: they imply a form of “end of history” and allow the worst to happen providing that it leads to this end — again, this is not innocent that the Nazis’ official denomination of the holocaust was “the solution of the Jewish problem.” What I would like to argue in this short article is that the establishment of a State of Palestine would in fact correspond to an update of the 1993 Oslo Accords that saw a Palestinian bourgeoisie and political elite emerge and take advantage of the occupation, rather than lead the Palestinian struggle to a just situation.

As I wrote as commentary to a map of the region without borders, the scenario of a State of Palestine existing aside a State of Israel, despite its lot of simulacrum of immediate victories (the eviction of the Israeli settlements in the West Bank, and in the most optimistic scenario, in East Jerusalem too, for example), would crystallize fundamental issues. The first one is the most obvious one: the separation of the population of Gaza with the one of the West Bank and East Jerusalem. The high contrast of distance makes the comparison with the two territories under Pakistani sovereignty — one that became Bangladesh in 1971 — at its creation (1947) difficult to be made, yet it is certainly present in historical filigree. Scenarios of a road linking both territories have been elaborated (see past article) but the precariousness of such an infrastructure and the potentiality for absolute control by the State of Israel cannot be possibly ignored. For this reason, the so-called “two-state solution” awfully envisions an actual future three-state situation.

Another obvious issue that such a scenario would definitely crystallize is the impossibility of a “right to return” for the Palestinian diaspora in the world. Evicted in 1948 without having been able to ever come back on their land, some Palestinians and their families have been waiting close to 70 years to go back to their now destroyed villages on Israeli territory. The Palestinian Authority will argue that the refugees will be welcome in the newly established State of Palestine, but the criminal eviction of a million people will find here its unjust conclusion after decades of struggle. This notion of justice is certainly not to be ignored and whether it is achieved through international or national courts, or through the creation of a “truth and reconciliation commission” (justice through the explicitation of crimes) like it has been the case in post-Apartheid South Africa in 1996, no satisfactory scenario could possibly ignore the past war and apartheid crimes that have been committed.

The situation of non-Jewish citizens of Israel (including a good amount of Palestinians but also many African immigrants) is already highly problematic through the marginalization if not racism it exercises. In the case of the establishment of a State of Palestine, the subsequent State of Israel will declare itself a Jewish state, thus establishing de facto a status of sub-citizen for its non-Jewish population that will be pushed to accept it or to leave the national territory. Finally, it is not hard to imagine that after a few months/year of apparent appeasement, the antagonism will re-emerge and the Israeli army won’t have any more trouble invading and bombing the State of Palestine than it had in the past to do so in the West Bank and Gaza. Only then will we realize that nothing has changed, and that the same issues will perpetuate for the decades to come. The establishment of two separated states will only have made these issues more sustainable.

The only acceptable scenario is one that fundamentally disrupts the current schemes of governance of Palestine (understood here as the entire historical region). As written above, it would go through an entire judicial process — whatever the form it will take — recognizing the past crimes, it would establish only one status of citizenship, it would accept the land of Palestine as being one of migration and therefore define policies accordingly for both the Palestinian and Jewish diaspora, but also the African migrants and refugees who saw an opportunity in this land, and will implement a fair redistribution of wealth, the latter having been necessarily acquired in relation to the occupation so far, whether by the Israelis or by the Palestinian bourgeoisie. Only with these conditions could we reach a model of society in Palestine that provides a just living environment to all populations involved.