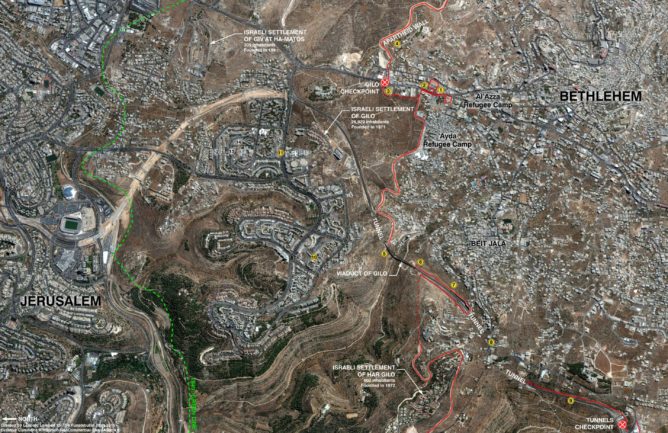 Map created by Léopold Lambert for The Funambulist (May 2015) / Download a high-quality version of them here (8.1MB) (license: Creative Commons Attribution-NonCommerical-ShareAlike 4.0)

Léopold Lambert – Paris on May 11, 2015
If you enjoy articles of the blog, have a look at The Funambulist Magazine!

The Israeli settlement of Gilo (26,929 inhabitants), whose construction started in East Jerusalem four years after the 1967 invasion, is well-known to be exemplary of the occupation and colonization of East Jerusalem. One of the main reasons for this consists in the road-infrastructure associated to it: a high viaduct dominating the Palestinian town of Beit Jala (see photos 5 and 6) and two tunnels (see photo 7) constituting what Eyal Weizman calls “the politics of verticality” (different sovereignties applied on different layers of the same territory) in Hollow Land (Verso, 2007), whose cover shows a drawing of the viaduct. Gilo, and its ‘little brother’ Har Gilo (602 inhabitants) are also forming the buffer area between Jerusalem and Bethlehem, two municipalities separated by the apartheid wall built by the Israeli government starting 2002. The two checkpoints that filters Palestinian (and pilgrims) movement between Jerusalem and Bethlehem are situated nearby: Gilo checkpoint itself (also known as 300) allows (on ‘normal’ days) pedestrian crossing (for Palestinian who have a permit to access Jerusalem) in addition to vehicles (most Christian pilgrim coaches use it), when the tunnels checkpoint regulate Road 60 that joins Jerusalem to Hebron — vehicles with an Israeli plates can go through the tunnels, while Palestinian cars cannot.

These last aspects of Gilo are only characterizing its militarized surroundings that constitute the apartheid landscape of Palestine (see the others photos below for more). However, we should also pay attention to its own urbanity and architecture. In this regard, it is notable that the famous Israeli architect, Arieh Sharon, who was the head of the Government Planning Department between 1948 and 1953 under David Ben Gurion’s orders (thus at the core of the Zionist architectural project), designed an interesting cluster of housing apartments for Gilo at its creation (see photos 13, 14 and 15). Although facing North (towards Jerusalem) these units certainly convey a defensive and militarized organization of space — Sharon was also the architect of numerous kibbutzes where a disciplined organization of life had to be framed. Because of their similar typologies, this architectural project can be compared to the housing unit cluster that another well-known Israeli architect, Zvi Hecker designed for another East Jerusalem settlement founded around the same time (1973): Ramot (42,246 inhabitants).

In order to look at Gilo’s architecture further into details, we can look at Rachel Kallus‘s chapter in Haim Yacobi‘s book, Constructing a Sense of Place: Architecture and the Zionist Discourse (Ashgate, 2004) — a book that fails to critique in depth its object of study, yet that is certainly worth reading for the historical discourse it offers. Entitled “The Political Construct of the ‘Everyday’: The Role of Housing in Making Place and Identity,” Kallus’s essay focuses particularly on Gilo, and attempts to establish the defensive requirements of such a settlements — surprisingly she does not evoke Sharon’s housing project. I won’t discuss whether the feeling of threat allegedly experienced by Gilo inhabitants is legitimate or not (this essay was written during the Second Intifada) here, since this population has lived and continues to live in violation of the Fourth Geneva Convention, which it could avoid by moving a few kilometers further North or West. The buildings themselves are built according to a defensive scheme — Kallus evokes a fortress — facilitated by the orientation of the settlement towards Jerusalem rather than Bethlehem. The securization market is a prolific one in Israel, and Kallus reveals that in the beginning of the years 2000s, all apartment units of the settlements received bulletproof windows manufactured and installed by a private corporation and paid by the State, for a total budget of 13 millions of dollars (about $1,500 per square meter of window surface).

The reason that the State of Israel has its check book (and its tax exemptions) always ready when it comes to the settlements in the West Bank and East Jerusalem is at the core of Kallus’s argument: their homes and the “everyday” lives that they host are simultaneously an extension of the national territory, as well as its fortified defense. Their inhabitants are thus the voluntary pawns of a national ideology and strategy — in many cases, they are also the initiators of such a strategy but this is not the case of Gilo — which requires their bodily presence to materialize the occupation. We should however not forget that the military and civil domains are not only blurred in architecture, but also through these same bodies, since most of them have served in the Israeli army for three or two years. Just like for the army, the recruiting of available bodies to extend the national territory goes beyond the borders of Israel: Kallus even evokes the case of a former Soviet Union immigrant woman that she interviewed about her life in Gilo: she was immediately granted the Israeli citizenship “after her apartment was set on fire in on of the shooting incidents” — Kallus does not describe the circumstances of this “incident.” In an apartheid situation, where administrative permits of all kinds are being systematically denied to several millions bodies,  and where millions of refugees are denied entry, citizenship is swiftly granted to a population favoring Zionism and that can serve its militarized incarnation.

PHOTOGRAPHS KEYED TO THE MAP ABOVE ///