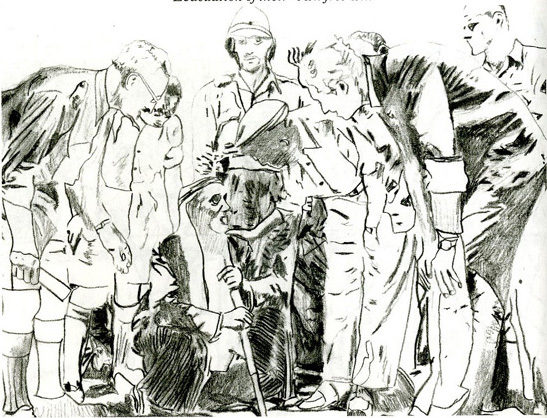 In her work, Ariella Azoulay regularly attempts to describe photographs according to two events: the first one when the photograph is taken, often within the illusion that the presence of the camera does not influence the action — physical laws describe nevertheless the contrary — and the event of the reception of the photograph. In a conversation at the Contemporary Art Museum of Barcelona (MACBA), she shows a picture of two young Palestinian women displaced out of Palestine (in this article I will use the term of Palestine to define the region where both Israeli and Palestinians live) in 1948, and describes the obvious violence of the first event, but also the one that makes us, viewers, as complicit as this event by calling these women “refugees,” and thus essentializing them through a historical process that did not end yet.

In 2012, Ariella Azoulay published a booklet with Fillip Editions entitled Different Ways Not to Say Deportation: Unshowable Photographs (there also was a piece at Paris’s Palais de Tokyo for the French triennale) from which I insert some excerpts at the end of this article (I wish that I could simply make the PDF available but it is not creative commons and the printed version can be purchased here). The documents shown in this booklet are not photographs but drawings that Azoulay herself drew based on photographs she consulted at the International Committee of the Red Cross (CICR) archive in Geneva. These photographs showed some of the 750,000 Palestinians deported between 1948 and 1950, and the reason why Azoulay had to draw them is that the CICR authorizes only certain narratives to be associated with them. The unauthorized narrative that Azoulay wanted to associate with them is one that she regularly describes: the pre-Nakba Palestine where jews and arabs — who could technically be both called Palestinians — were living on the same land. Such a narrative prevents a bi-nationalistic history — that seems to be the only one used both to address “problems” and “solutions” — and considers the deportation as a national catastrophe (nakba means catastrophe in Arabic) that split a population into two, perpetrators and refugees.

The CICR insists on its neutrality in what is commonly called “the conflict;” this is probably why the official captions of the photographs, transcribed by Azoulay to the drawings, use a benign terminology, in particular when describing the massive population displacement based on ethnic characteristics. The term “rapatriement” (the CICR is francophone) meaning repatriation is used several time to avoid the term “deportation” as Azoulay’s piece expresses. Undercover of neutrality, the CICR is thus using a word that could not be possible is neutral: repatriation implies the return of bodies within their nation. In this case, it implies an original territory to which Arab bodies in Palestine should return, leaving the land to the Jewish population.

This idea of neutrality is simply an illusion. This is true for the captions, and thus the narrative that provides an explanation of the photographs, this is true for the photographs themselves as the photographer made a sum of subjective choices to produce each image and, as said above, the presence of the camera itself is enough to influence the event, this is true for the way Azoulay drew the photographs, which line she decided to keep, which detail she voluntarily or involuntarily omitted, and finally this is true for the way we read these images and our expectations (a binational reading for example). A historical document, just like an evidence in any given trial, is a piece that can be used as base of a discourse of truth like History or Justice; yet, each discourse of truth has to be examined in their own subjectivity and the potential ideology they convey. Just like the observer always influences what (s)he observes, the documentation of history has incidences on the events it describes and should be acknowledged as such.