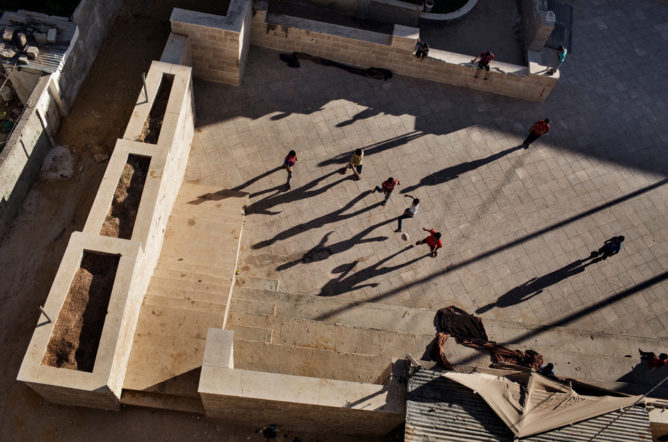 A few days ago, the New York Times exceptionally published an interesting article about Palestine entitled “Refugees Reshape Their Camp at the Risk of Feeling at Home” (Michael Kimmelman, Sept 6, 2014). This article describes the dialogue between the Palestinian refugees living in the camp of Fawwar near Hebron and architects Sandi Hilal and Alessandro Petti, well known on this blog to be the founders (with Eyal Weizman) of Decolonizing Architecture — something that the NYT failed to introduce, probably considering that it was too “political.” The object of this dialogue was the project to design and build a public square in the refugee camp. I have been introducing the architectural dilemma that constitutes the idea of improvement of a refugee camp a few times, but never dedicated an entire article to it; this built public square provides the paradigmatic conditions to do so.

The architectural dilemma of the refugee camp consists in the idea that everything about the camp should express its temporariness. This question starts to intervene when a camp has been existing for a few years, and one would easily understand that it becomes particularly problematic when the camps are almost 70 years old like in the case of the Palestinian camps in Gaza, the West Bank, Jordan, Syria, and Lebanon (see the summary map). In their case, the problem is not that the safe conditions are not gathered for their population to return on their land, but rather that the sovereign authority (namely the State of Israel) on the land of return categorically refutes this right, while simultaneously granting it to the religious group it strategically attempts to represent. The expressed temporariness of the camp is therefore even more crucial as it shows the determination of its inhabitants to return one day on their land — on their family’s land in most cases since most refugees are born in exile. We can thus perceive the problematic characteristics of a spatial improvement project like the public square of Fawwar, and the subsequent debate that occurred when this idea was triggered.

I remember attending to a lecture of Petti and Hilal a few years ago, during which she affirmed that she refused to believe in this logic of self-inflicted degraded life conditions to carry a political argument. One could argue that this logic is the same than the one applied in a “no-wash” protest or a hunger strike (see past article), but it is true that there is a sensible difference between the individual choice of undertaking such a radical strategy (even if accomplished collectively), and the collective involvement of an entire population reiterated more by inertia of time than by affirmed consensus. In the specific case of Fawwar’s public square, Hilal, Petti, and other refugees succeeded in convincing the camp’s inhabitants that the struggle to obtain the right to return would not affected by the improvement of their life conditions. In this regard, it might be interesting to note that the architecture of the square itself has been carefully thought to suggest a sort of non-achievement, a “house with no roof,” that could still participate to a narrative of temporariness without reaching to do so through the degradation of life conditions. One might see an architect’s rhetoric in this fact, I don’t.

If we continue to apply the logic of this project, we have to recognize that the poor life conditions of Palestinian refugee camps do not seem to have triggered any form of sympathy in ‘the international opinion’ — a strange phrase admittedly — for the successive Israeli governments, nor for the ‘host’ governments (in Lebanon in particular). What this means is that the effect that the architecture of the camp has more incidence internally (i.e. on its inhabitants) than externally. The feeling of being “at home” expressed in the title of the NYT article is precisely what is at stake in this dilemma. If a young Palestinian refugee, born and raised in the camp, starts to feel “at home” where (s)he lives, what would make her/him want to live somewhere else if the struggle towards the right to return ultimately succeeds? What the refugees of Fawwar reply to this question through this project is that such a scenario would allow their truly free decision between a place they could call “home” and another they understand as being tremendously charged in the collective memory and political struggle. In other words, it would not be the poor conditions of life that would make the return unavoidable but, rather, the freely contracted political engagement of a population in exile.

I would like to insist that this last paragraph constitutes what I understand of the logic of this project rather than my intimate conviction, which is more unsettled. This logic tends to decrease the ability to use architecture as a political weapon, since it suggests that its expressed temporariness is somehow ineffective, and that the struggle for the right to return proceeds outside of architectural strategy. However, critiquing this logic from outside would be speaking from a privileged position that is unacceptable to make any form of legitimate argument. Only the inhabitants of each refugee camps are entitled to decide in which manner they want to participate (or not) to the political struggle of the right to return on their family’s land. The fact that an architectural project can trigger such a debate is a way to appreciate how the creative process of design might be as important as its actual product.