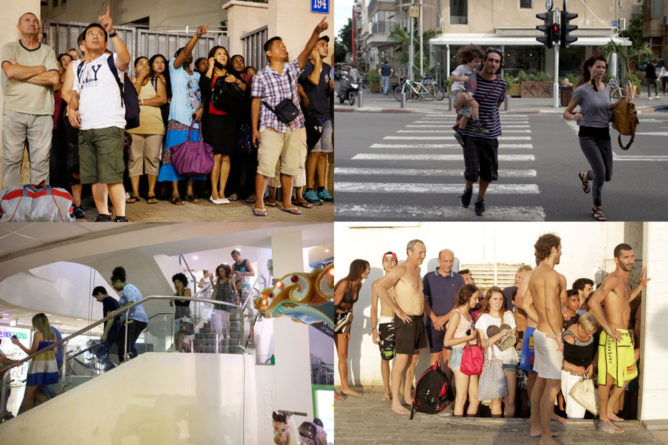 Writing seems to be the only thing that does not make me feel completely powerless in front of the horror of the on-going bombing of Gaza coupled with a vast campaign of misinformation led by the Israeli State and army then followed by the quasi-totality of the Western mainstream press. Commenting on the (deliberate or not) misuse of images of destroyed houses in Gaza to describe the situation in Israel like openly biased media the BBC or Fox News have been doing is not of my interest here. On the contrary, the imaginary that is conveyed by self-entitled “liberal press,” in particular in European is, I believe, much more problematic. The main basis of this imaginary consists in constructing narratives presenting absolute symmetry. They talk of the “Israeli-Palestinian conflict” or “peace agreements,” when presenting the destruction of Palestinian lives and homes, they insist on the “retaliatory” characteristics of such military operation and, despite the affirmed regrets of the killings of civilians, they directly use IDF documents and rhetoric to justify them. But symmetry can only manifests if the manufactured imaginary involves the notion of threat for all bodies living in Palestine (i.e., the region of Israel and the Palestinian territories). There is thus a need for an imagery of Israel under attack, an ideological spectacle (one might want to wonder if there can be a non-ideological spectacle).

Manufacturing the ideological spectacle of threat and fear is used by the Israeli army both internally and externally. Externally, such a spectacle will, indeed, provides the imagery of a nation under continuous threat, a “villa surrounded by the jungle” as former Israeli Prime-Minister and Minister of Defense, Ehud Barak famously defined Israel. This spectacle used externally is conveyed through images. It therefore requires a photographic and cinematographic labor to provide such visual documents that will inform the imaginary of legitimacy. The Israeli crowd gathered at night with portable chairs and popcorn on the hills of Sderot bordering the Gaza strip, cheering each time a bomb explodes on Palestinian houses, articulates the role of the audience (external use) with the role of the actors (internal use) introduced in the next paragraph.

The ideological spectacle is thus also internal. It consists for an entire nation, when hearing the spectacular Pavlovian sirens, to perform a set of patterned behaviors that allows the daily convincing of self and others that the threat is real and ubiquitous. The fact that Israelis (to the exception of Palestinians in Israel) all go through years of military service (3 for men, 2 for women) at an age where one is particularly ideologically malleable, reinforces the seriousness in the performativity of fear that will ultimately feed the well-known discourse of “the right to self-defense” for Israel against Palestinians that are under its sovereignty only when it is convenient for it. Statistics can only inform an argument so much but let’s recall that, in the last year, 263 Israeli were killed in car accidents, none were killed by rockets fired from the Gaza strip. The production of common images are also involved in this internal use of the ideological spectacle as Belén Fernández explains in her article “Dead People Can’t Take Selfies” on Jacobins about the creation of a facebook group for Israeli people sheltered during the spectacular bomb alerts.

The sirens might interrupt a day spent on Tel Aviv’s beaches or shopping malls: Israel is a villa, yes. It is an oblivious gated-community capitalist villa with two giant swimming pools (one on which you can float while reading your newspaper), which refuses to see that the so-called “jungle” (at least, the immediate Palestinian one) that surrounds it is nothing else but the towns and their inhabitants that the villa’s existence and its ideology maintains in a bare precariousness. A villa never exists in a vacuum, a villa materializes a territory accessible to some and exclusionary to others. However, on the contrary of what the Palestinian bourgeoisie and representatives of the Palestinian Authority seem to think, the “jungle” should not aim at becoming “villa”: there is a need to create a different, common ‘architecture’ for this bi-national country that does not exist yet.