Léopold Lambert – Paris on August 7, 2017
If you enjoy articles of the blog, have a look at The Funambulist Magazine!

This is the last installment of this short series of articles about Palestine. The four previous ones were published as follow:
– The “Hebronization” of Jerusalem-Al Quds (July 23, 2017)
– The Walled Refugee Camp of Shu’fat in Jerusalem (July 25, 2017)
– Lifta, a Stone Evidence of the Nakba in Jerusalem (August 1, 2017)
– Rawabi, the Architectural Prophecy of an Unequal Palestinian State (August 4, 2017)

Although when talking about Palestine, I always insist on the wholeness of its territory, which includes Israel itself, I have not been consistent in my praxis of this territory, since the only part of Israel where I spent some time during my two trips of 2010 and 2015 was West Jerusalem. Part of me saw this as a form of solidarity with the majority of Palestinians who do not have a permit to access the other side of the Apartheid Walls in the West Bank and Gaza , but this practice bared even less consistency since Jerusalem-Al Quds was a significant exception to this rule and that any access to Palestine at all could be legitimately seen as a privilege in regards to the denial of such an access to Palestinian refugees in Lebanon, Syria and Jordan, banned activists, and citizens of the sixteen Muslim-majority countries in MENA and Asia that are considered by the successive Israeli governments as “enemy states.” This time, I therefore spent some time in Jaffa-Tel Aviv, ten years after my first visit there. This decade of absence sharpened my feelings when observing the progression of a urban phenomena we may call gentrification but that should in no way be considered outside of the continuum of settler colonialism logic — both processes being inseparable as we will see further. In this regard, it is important to recall the history of Jaffa as part of this continuum. 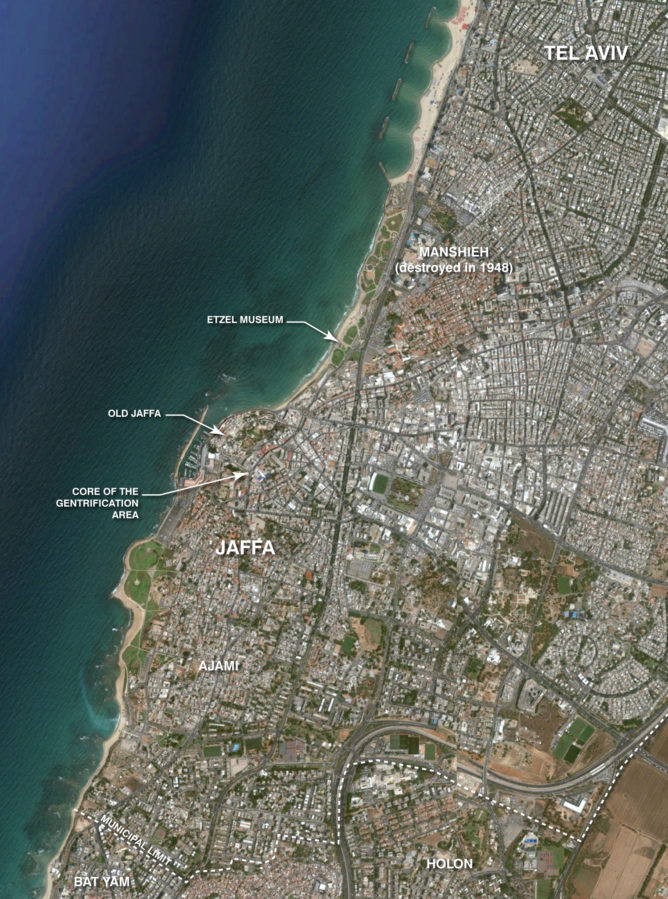 The book White City Black City: Architecture and War in Tel Aviv and Jaffa (The MIT Pres, 2015) written by Sharon Rotbard is instrumental to understand this history, and how “there is […] no difference between neighborhood politics, city politics, national politics, and global politics.” Rotbard goes back as far as 1799 and Napoleon Bonaparte’s siege on Jaffa as the precursor of an antagonism between Palestinian Arabs and Jews. In a “colonial delirium,” Napoleon wrote a proclamation that foreshadows the Balfour Declaration one hundred and eighteen years later, in which he invites the “Israelites,” “rightful heirs of Palestine,” to “conquer [their] patrimony,” reinforcing the thesis according to which Zionism as a colonial program is originally a non-Jewish European invention. Jumping forward in time, Rotbard notes how the British army’s Operation Anchor was the first of many occurrences when urban planning and warfare were used in concert as a means of dominating and controlling the Palestinian population in Jaffa. Taking advantage of the state of exception triggered by the 1936-1939 Great Arab Revolt against British rule and Jewish immigration to Palestine, Operation Anchor started on June 16, 1936 with the evacuation of the old city’s population, followed three days later by the destruction of two hundred and thirty-seven Palestinian Arab buildings to create an avenue to the harbor.

Towards the end of the British Mandate that will culminate in the Nakba on May 15, 1948, Zionist paramilitary groups started their attacks on Jaffa on December 2, 1947, thus making the middle and upper Palestinian Arab class flee from the city. Consequently, the local economy collapsed. The full-scale attack on Jaffa by the Etzel (aka Irgun) Zionist paramilitary group started on April 25, 1948 and ended the day before the establishment of the State of Israel:

This began with a rain of mortars over the city, sustained right up until the old Arab capital fell. According to Palestinian accounts, the bombardments were coupled with radio broadcasts in Arabic in which the Etzel promised the civilian population that their fate would be similar to that of the inhabitants of the village of Deir Yassin, near Jerusalem, who had been massacred a few days earlier on April 9, by the Etzel and Lehi’s [Stern Group] fighters.

Manshieh, Jaffa’s northern neighborhood, was obliterated and the rare photographs available serve as evidence of the absolutist violence of the ethnic cleansing. On the ruins of the Palestinian neighborhood, the southern part of Tel Aviv was built in the following years, and one building in particular vividly recounts this violence. The Etzel Museum, on the side of Manshieh’s beach, consists of an ugly dark glass box built directly on the ruin of a former Palestinian building in a literal architectural statement of domination. Its architects’ statement, quoted by Rotbard, is particularly indicative of their embrace of the ideology conveyed by the building: “from the shattered walls of the old building grow dark glass walls, […] schematically completing the building to what it once was, […] an attempt to freeze the special moment and time of the day when Jaffa was liberated.” If it was not a museum dedicated to what is considered by the British colonial authorities as a terrorist group, one could almost think of this building as a political artwork, revealing the Palestinian ruins on which the State of Israel is built, when many of these ruins have been destroyed and hidden by seeded forests all over the territory after 1948. A year later, Jaffa was annexed to Tel Aviv and remains under military occupation to this day since the Israeli army has established many barracks and other facilities in the Palestinian city.

In the 1960s, Israeli urban plans were drawn to renovate Old Jaffa that can best be characterized as a form of orientalization of the city, presenting it as a picturesque fragment of a past (that precedes the Palestinian existence in the Israeli nationalist narrative) in opposition to its modern counterpart, the so-called “White City.” Significantly, in these Israeli designed urban plans for the Palestinian city, Rotbard notes, the 1936 military transformation of the city was maintained, thus lending an additional level of legitimacy for the military to plan urban fabric.

Today, the military occupation of Jaffa is still present — the military radio, “Galei Tzahal,” headquarters for instance, are situated on Dror street, a hundred meters south of Old Jaffa — but in a similar way that the transfer of Israel’s civil population to settlements in the West Bank has considerably anchored and sustained the occupation, the gentrification of Jaffa by Tel Aviv real estate developers and residents is finalizing the denial of Palestinian past and present existence in what used to be the vibrant Palestinian city. Using a predatory system of state ownership of the land described by Imogen Kimber in a 2015 Middle East Eye article, Palestinians of Jaffa are experiencing a continuous process of dispossession that progresses towards Ajami, the southern neighborhood of Jaffa. Luxurious and semi-luxurious condominium buildings are built in and around Old Jaffa, with the active complicity of European architects, such as British designer John Pawson, featured on the ostensible posters of the so-called “Tel Aviv The Residences” project, currently in construction, advertise obliviously by architecture blogs such as Dezeen. Nearby, one of the ubiquitous Israeli real estate developing company called Home Land is rather explicit in its name about the project to which it contributes. As for Jaffa’s market that marks the northern entrance of the Old City, it has been turned into a grotesque setting of trendy cafes and antique stores, where one regularly encounters Israeli flags and American birthright groups gulping down the Israeli nationalist narrative served on a platter to them.

Of course, comparing the capitalist construction of residential buildings in Jaffa and the military-monitored construction of settlements in the West Bank make only sense if their violence is understood through different degrees; yet, what the gentrification of the Palestinian city shows us in the context of the Israeli Apartheid, is that gentrification, whether it happens in Brooklyn, in Paris, or in Rio de Janeiro, is always tied to forms of state structures of violence towards targeted populations. As a capitalist process, gentrification operates by definition against the most impoverished residents, but processes of inherited impoverishment intrinsic to this system as well as the colonial continuum of these societies adds to this economic violence, a racialized one. We should therefore not think of the gentrification of Jaffa as an exceptional phenomena, but rather as the exacerbated violence (and therefore easier to distinguish) of a process at work in many cities of the world.

The other element of possibly relevant comparison between Jaffa’s Israel luxurious new developments and Jerusalem and the West Bank’s settlements is a complex one that I tried to (perhaps, clumsily) articulate in the past (see this January 2016 article): the spatial colonization of Palestinian land on both side of the Apartheid Wall, beyond its extreme dispossessive violence, tends to reduce the specificities of the different regimes of the Apartheid. Of course, such a uniformization is strategically conceived in the framework of Zionism; yet it significantly diminishes the possibility of a segregated ‘sacrificial’ Palestinian State(s) (described in the previous article about Rawabi) and, as such, can be appropriated by the struggle for decolonization and equality. Using Jaffa-Tel Aviv as a paradigm in her thesis “Advancing the Struggle for Urban Justice to the Assertion of Substantive Citizenship: Challenging Ethnocracy in Tel Aviv-Jaffa,” as well as in a 2015 conversation for The Funambulist podcast, Dena Qaddumi speaks of “the right to Tel Aviv” for Palestinians that she understands as controversial but also necessary to address for the construction of a consistent political framework. The complexity of this question — it is difficult to think that any of the Apartheid apparatuses operating today is likely to ultimately serve their dismantling — is likely to be proportional to the decolonial outcome it could allow. 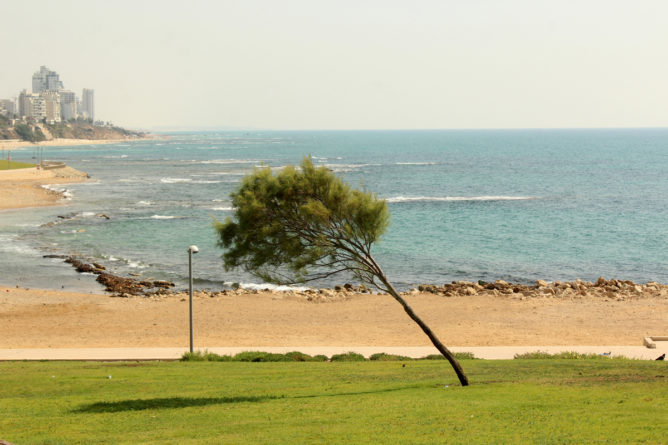 I would like to finish this series of the article with the emotion that was mine when encountering a few trees on the shore of Ajami (southern Jaffa) in a relatively new park whose small hills leaves these trees unprotected from the Mediterranean wind. Looking South (see photograph above), delusionally trying to distinguish Gaza, where Palestinians currently only have 2 hours of electricity per day, amidst extremely hot temperatures, surviving against all odds when Israel, the Palestinian Authority and Sisi’s Egypt somehow unite as wardens of what has been called “the largest open-air prison in the world.” Looking East at Jaffa itself, its sustained dispossession and, further, Jerusalem-Al Quds and the West Bank where the occupation applies its methodical violence in the daily lives of all. Looking North at the crying absence of the remains of the Palestinian villages evicted and destroyed in 1947-1948 and the fate of Palestinian Israelis considered as “a demographic problem” and a human currency in what many do not seem to see the cynicism of calling “peace talks.” These trees hit me as a symbol of Palestinian resilience: they bend but never break. 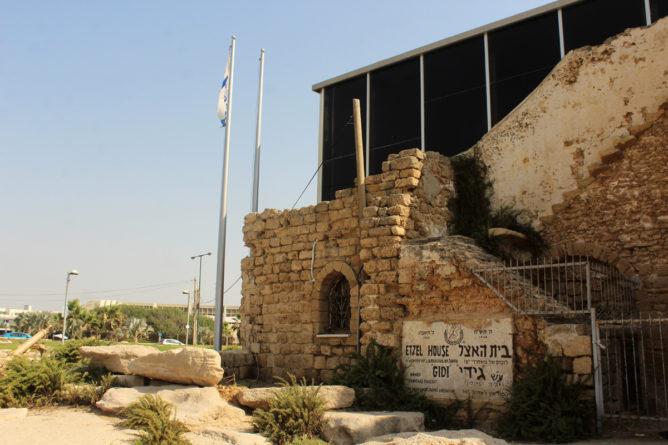 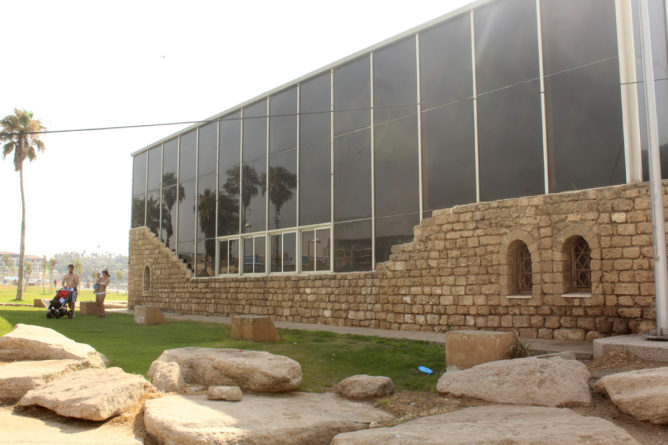 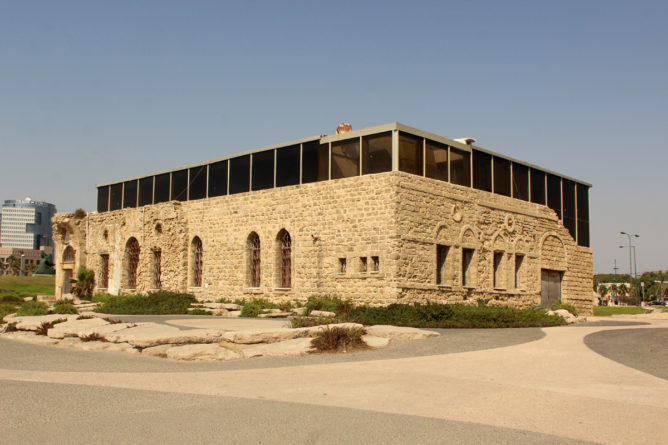 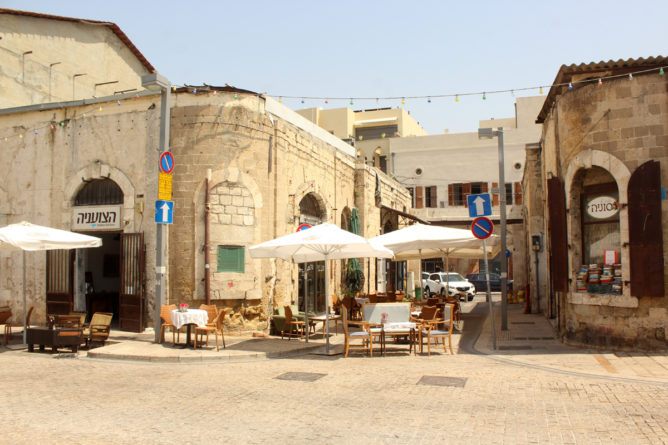 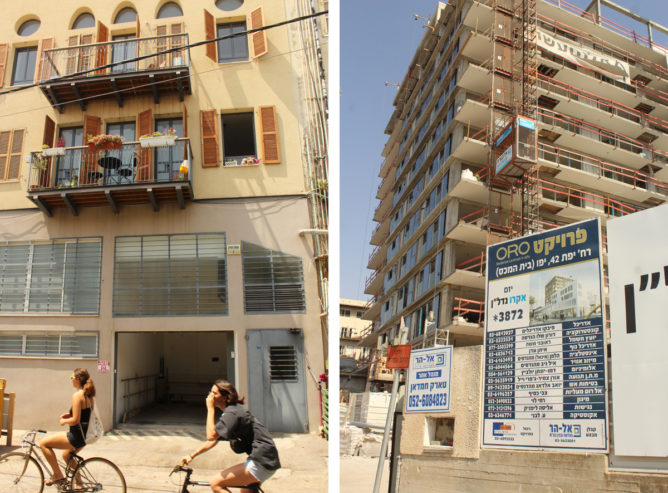 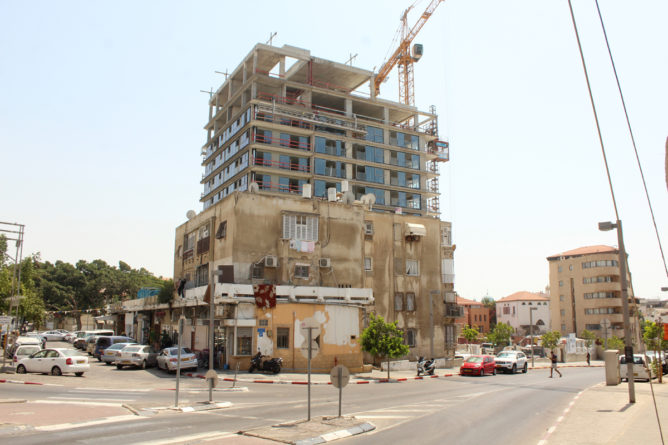 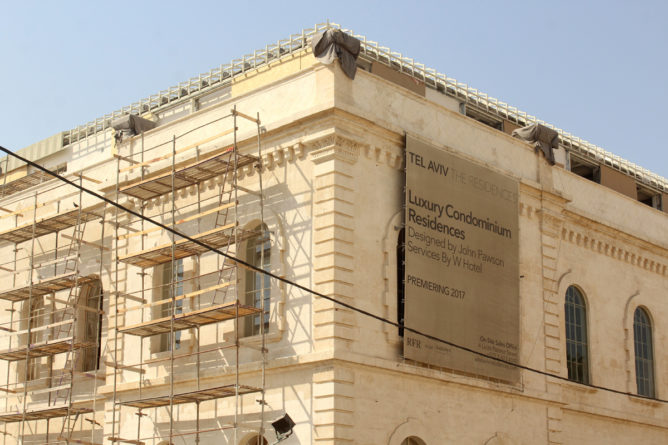