Léopold Lambert – Paris on August 4, 2017
If you enjoy articles of the blog, have a look at The Funambulist Magazine!

This article is the fourth installment of a series of five that operate as a report of my most recent stay in Palestine in July. While the three first parts were set up in Jerusalem-Al Quds, this fourth one is dedicated to a city that did not exist a few years ago. Situated in the West Bank between Nablus and Ramallah (see map at the end of this text), the new city of Rawabi materializes a sum of crucial questions about the present and the future of Palestine. Developed by the Bayti Real Investment Company, which is owned in partnership by the Qatari Diar Real Estate Investment Company and the Palestinian company Massar International owned by charismatic Bashar Masri, the construction of Rawabi started in 2010 at the climax of the politics of development engaged by then Palestinian Prime Minister Salam Fayyad, former economist for the World Bank and the International Monetary Fund (IMF). Such developments have particularly changed the face of Ramallah, the de facto capital of the Palestinian Authority in a deliberate indifference of the Israeli occupation and a consecration of the 1993 Oslo Accords. Furthermore, when it comes to these new neighborhoods built in the North of Ramallah (see the article “Constructing the Ramallah Bubble“) or Rawabi, it has become commonplace to compare their architectural aesthetics and their urban typology on top of hills (“rawabi” itself means “hills”) to the neighboring Israeli settlements — what I called in the past, an “architectural Stockholm syndrome.” As described by Tina Grandinetti in an article written for the second issue of The Funambulist Magazine, Suburban Geographies (Nov-Dec 2015)), the way architecture enforces the social segregation that a city like Rawabi produces is also manifest, and the many luxurious brands (Ferrari, Armani, Lacoste, Tommy Hilfinger, Mango, etc.) that ostensibly display “coming soon” signs on the storefront of their future stores in Rawabi, certainly contribute to it. Nevertheless, the questions that Rawabi triggers are too important to be dismissed by a superficial critique of it. 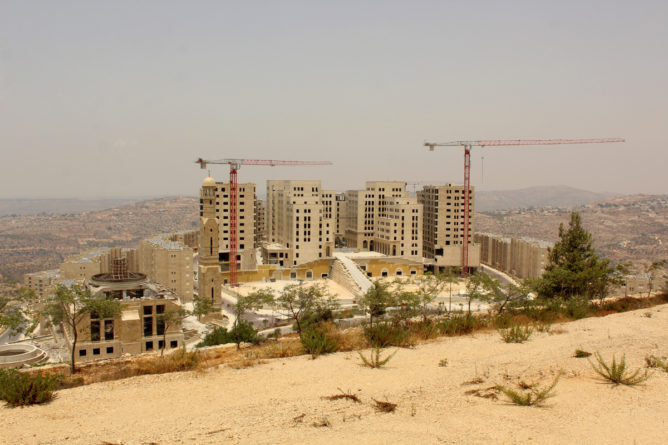 The first one is about the relationship to the Israeli Apartheid that necessarily conditions the existence of all project in Palestine. From the mouth of Fayyad or Masri (see the 2012 Dutch documentary “Rawabi: The Promised Palestinian City” for instance), the phrase “the occupation” comes back as a mantra, a seemingly unavoidable force with no apparent responsible entity for it: the occupation as a climatic condition. This is however not to say that all Palestinian project (be it architectural or anything else) should be explicitly and fully dedicated to constitute a resistance to the Israeli Apartheid (something I have been and probably continue to be guilty of, to a certain degree), since such an expectation would constitute a form of essentialization of Palestinianness, existing only through its resistive formation mobilized against Israel, which would ultimately reinforce the Zionist ideology that only acknowledges Palestinian presence as an antagonist creation contemporary of the creation of the State of Israel. This (often external) expectation was illustrated with humor by Sabrien Amrov when she wrote in a facebook post three days ago: “every time i tell academics I want to write about how Palestinians love, no one is interested. But if I say how Palestinians love as a form of resistance; then wow, that is hot.” The effective political forms of indifference to the Israeli Apartheid are those that (deliberately or not) exist and acquire agency without it, and not in spite of it. As such, we could (perhaps provocatively) argue that one of the most literal form of Palestinian indifference can be found in the strategies elaborated by the Boycott Divestment Sanctions (BDS) platform, since it attempts to fundamentally separates itself from any economical or cultural ties with Israeli companies and governmental programs. In this regard, Rawabi constitutes the exact opposite form of Palestinian indifference by embracing the logic according to which “business is not politics” and therefore work with a significant amount of Israeli materials and companies “as long as they give [them] a good price” says Masri. 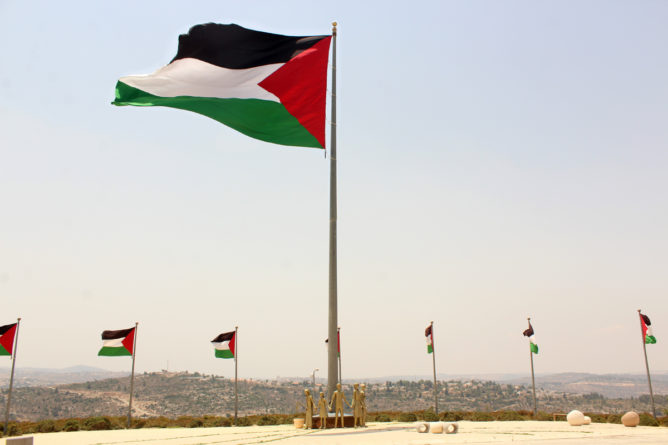 The second of the questions triggered by Rawabi can be found in its explicit politics as a symbol and a prelude to the establishment of a Palestinian State. In this regard, the first main problem posed by Rawabi is the politics of eminent domain that was mobilized by the Palestinian Authority when it seized 6 square kilometers of land from the neighboring villages of Atara and Ajul to allow the construction of the new city. On a land permanently marked by (and daily practiced through) the history of land dispossession that the Nakba and the Israeli occupation have created, and only a few hundred meters from the Israeli settlement of Ateret, this other form of authoritative dispossessive process incarnate a loaded violence that is (obviously) shut in the Rawabi official narrative — the destruction of an entire hill’s ecosystem in order to built a self-claimed “Green city” could be another one. Since 1994 and the creation of the Palestinian Authority following the Oslo Accords, Palestinians in the West Bank have experienced new forms of state violence (police violence, arbitrary arrests, land dispossession, etc.) that, for the past 27 years, had been exclusively coming from the Israeli occupation army — and, to a lesser degree, from the Jordanian and British states for the 47 years before that. The last 23 years (and the years that followed the Second Intifada in particular) have therefore offered a preview of what the Palestinian State could look like if it was established in the framework imagined by the Palestinian Authority, the so-called “International Community” and, despite opposite claims, the Israeli government itself (that expects to acquire through the establishment of the Palestinian State the legitimacy of its ethnocracy).

This state project is characterized by a spatial framework that make of the West Bank (and East Jerusalem), its primary and, perhaps, exclusive territory. The subject of the Gaza Strip, its 1.8 million inhabitants living for a large majority in extremely dire conditions (the Palestinian Authority being partially responsible for it), and the complexity linked to the territorial disconnection between both regions is never seriously discussed. And then, one can suddenly read about plans to establish a micro-Palestinian State in the Sinai peninsula for Palestinians of Gaza (Al Jazeera, July 2017). The Palestinian state project does not formulate either any vision for the fate of the 5 millions Palestinian refugees living in camps in Lebanon, Syria, Jordan, Gaza and the West Bank. Meanwhile, the Israeli government thinks of ways to strip Palestinian Israelis from their citizenship in a project of population transfer (The Electronic Intifada, July 2017) — it is interesting to note that a certain amount of Rawabi’s future residents are part of this population — which could be associated to the threats made by Senior Ministrer Tzachi Hanegbi who recently warned Palestinian Israelis of a third Nakba (+972, July 2017).

Rawabi constitutes an architectural prophecy of such a state: it is a sacrificial urbanity that symbolizes and enforces the acceptance of the price to pay by many for a few to access to the freedom of a complicit capitalized existence and become what Eva Schreiner calls “consumer citizens” in a paper dedicated to the new city (unpublished, 2013). But here again, we should not evacuate too quickly reality’s nuances in a peremptory judgment (especially one coming from the external position that I personally occupy). It is difficult not to be sensitive to the emotional words of future residents (or, at times, of Masri himself) interviewed for the Dutch documentary cited above, and one can read through these testimonies, the joy of a rare possibility of agency in conditions that always prevented it until then. Moreover, more than an accomplice to the Israeli Apartheid, Rawabi and its numerous problematic dimensions can be understood as a product of it. Colonialism in general and the Apartheid in particular do not operate through the binary strict characterization of bodies (“colonizers” vs. “colonized,” “whites” vs. “blacks”) through which we usually define them — such an absolutist scheme would unavoidably lead to its overthrow by a population that would have fundamentally nothing to loose from it. Colonial societies instead operate through a gradient of categorization of bodies corresponding to a proportionate degree of administrative violence to which they are subjected. The Israeli Apartheid violently enforces such a colonial hierarchy and reality is experienced differently between members of the diaspora, Palestinian Israelis, East Jerusalem residents, West Bank residents with a permit to work on the West side of the Apartheid Wall, West Bank residents who do not have such a permit, refugees in the West Bank, Gaza residents, refugees in Gaza, refugees abroad, etc. — this categorization is a non-exhaustive one (far from it) and ends up comprising as many ramifications as Palestinians. The social discrepancies created by this system (in the same manner than those created by the capitalist system) can therefore not be attributed to individual responsibilities but, rather, to the very structures of the system itself. As such, Rawabi may be more the ostentatious crystallization of such discrepancies than its cause. 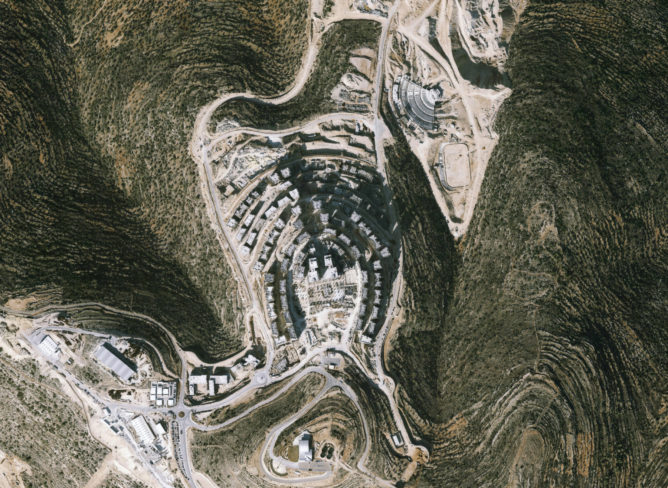 All photographs below and above by Léopold Lambert (July 2017). Creative Commons Attribution-NonCommercial 4.0 International /// 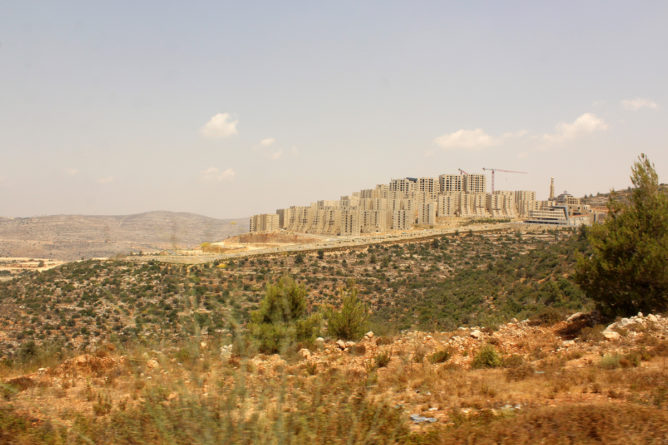 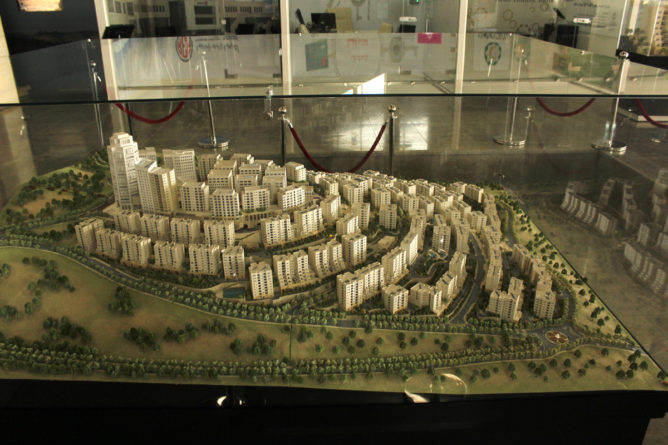 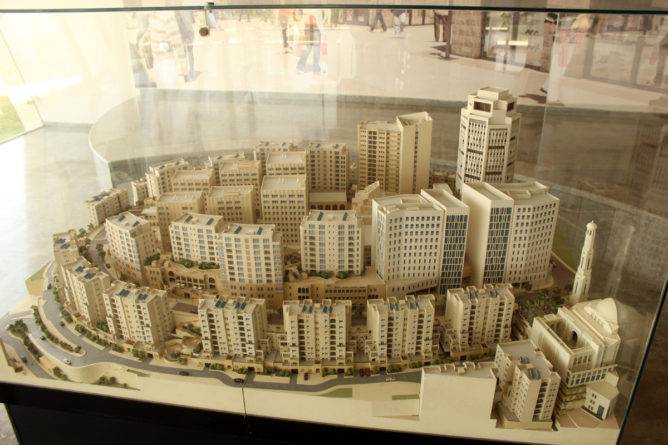 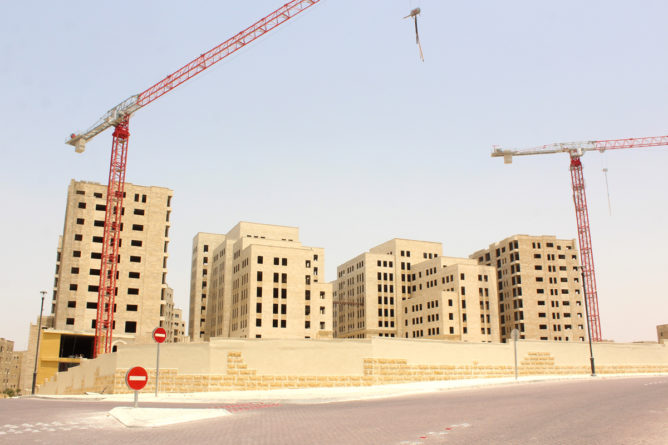 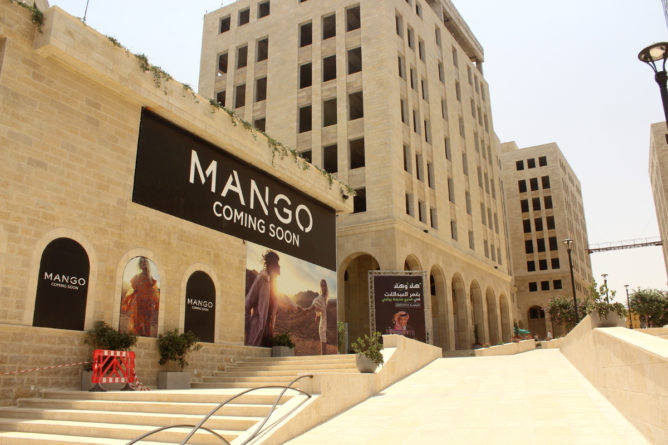 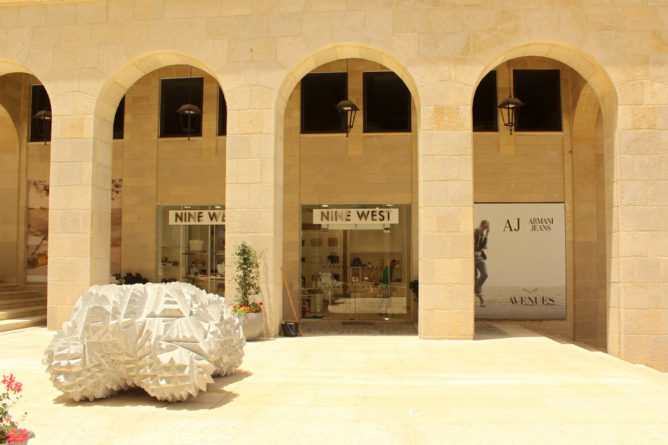 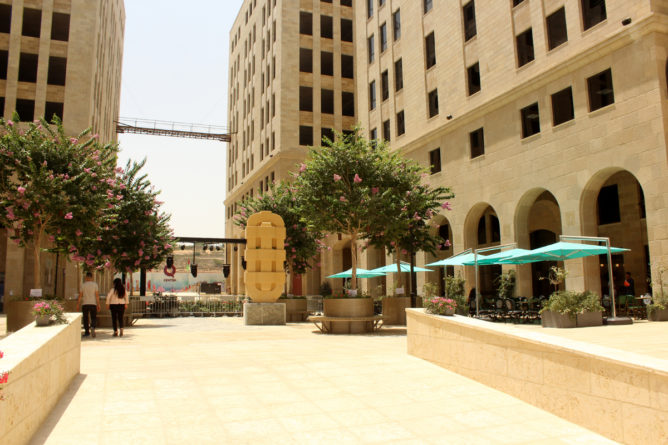 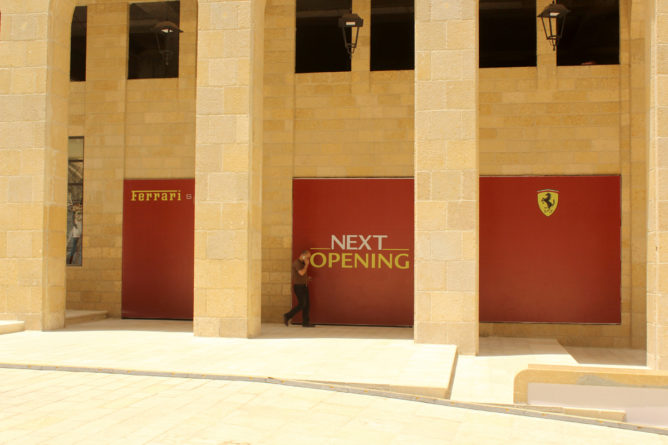 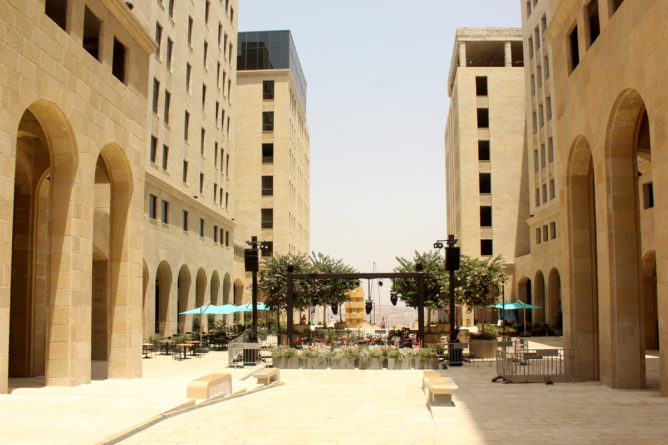 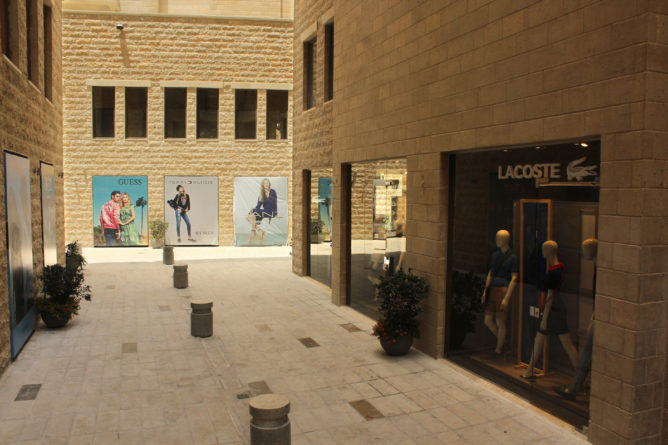 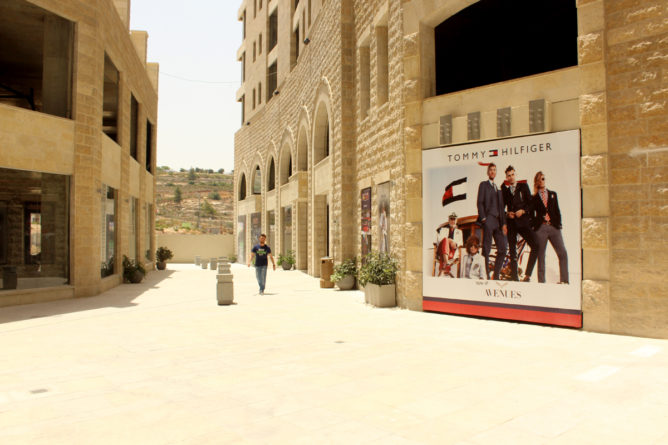 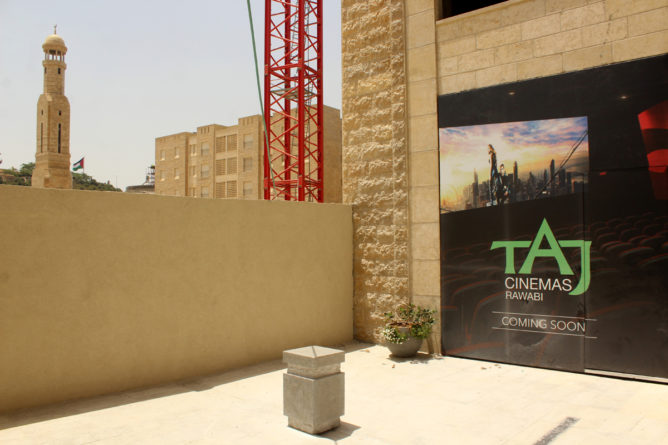 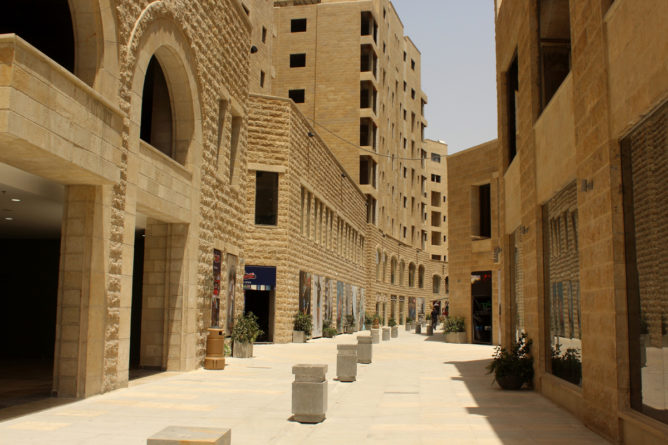 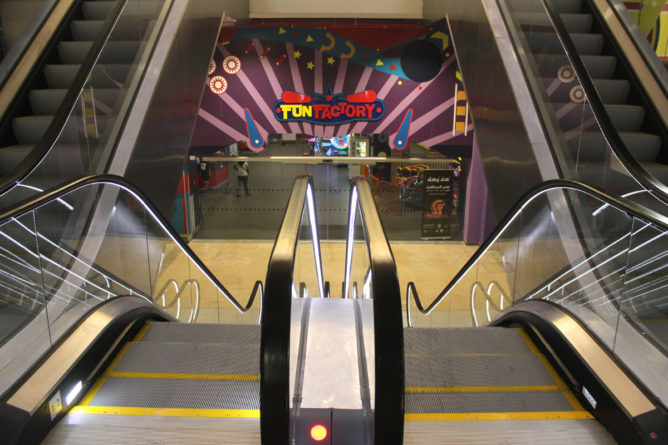 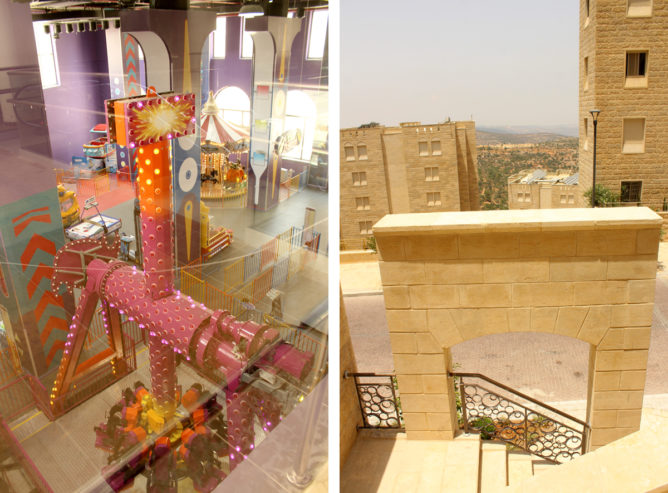 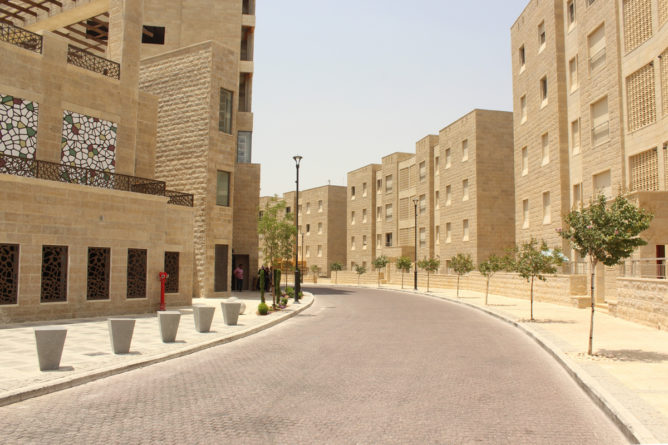 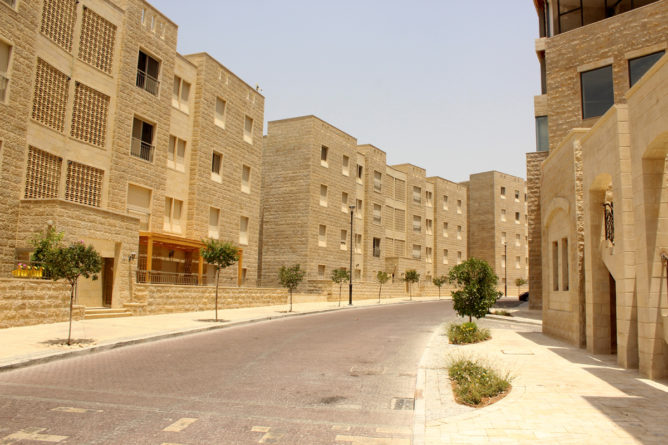 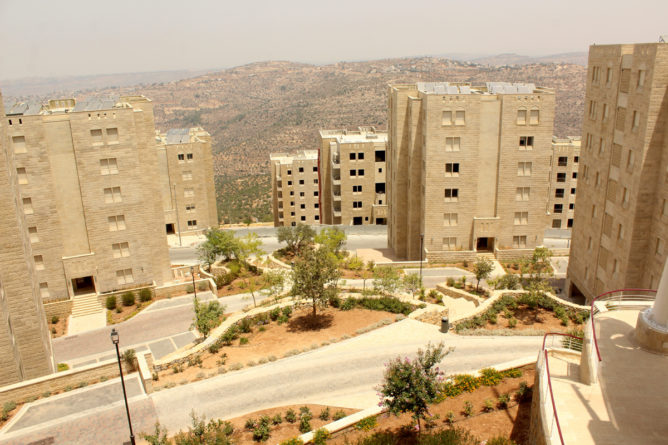 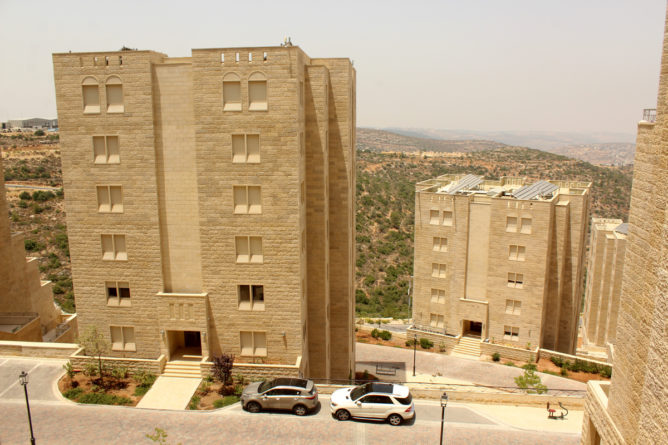 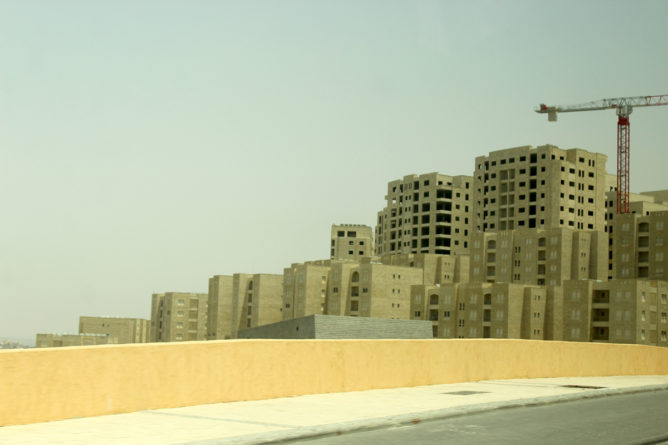