Léopold Lambert – Paris on August 1, 2017
If you enjoy articles of the blog, have a look at The Funambulist Magazine!

This article is the third installment of a series of five that operate as a report of my most recent stay in Palestine in July. Like the two first ones respectively dedicated to the Old City and the Shu’fat Refugee Camp, this third article is set in Jerusalem-Al Quds but, this time, on the western side of the city, in the part of Palestine known as Israel since 1948. The many ruins of Lifta that remain on the slopes of the Jerusalem hills allow us to envision Palestinian life prior to this date, as well as to understand the violence that occurred on the dreadful year of the Nakba that ended the life of this 2,000-year-old village. 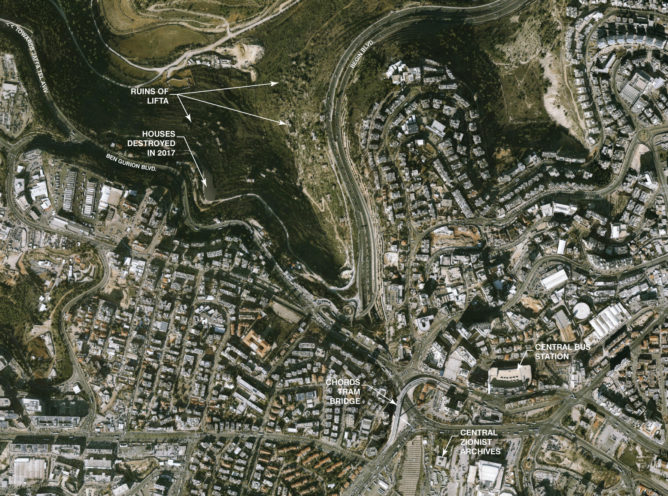 Situated 5 kilometer North-West of Jerusalem’s Old City, Lifta was a vibrant village prior to 1948 as the Israeli NGO Zochrot recounts in its crucial inventory of pre-Nakba Palestinian villages (see also Eitan Bronstein Aparicio and Eleonore Merza‘s De-Colonizer Map that since then deepened such an inventory):

The village houses were built mainly of stone, along the contours of the hill. The old streets of the village also ran in curvilinear fashion. […] The village had a mosque, a shrine for Shaykh Badr, and a few shops at its center. It also had an elementary school for boys and a girl’s school that was founded in 1945. There were, in addition, two coffeehouses and a social club.

The village was in effect a suburb of the city of Jerusalem, and its economic ties with the city were strong. The farmers of Lifta marketed their produce in Jerusalem markets and took advantage of the city’s services. Their drinking water was drawn from a spring in Wadi al-Shami. Their lands were planted in grain, vegetables, and fruit, including olives and grapes; olive trees covered 1,044 dunums. The rainfed agriculture of the village was concentrated in Wadi al-Shami in the depressions lying to the southwest of the village, and on the slopes in 1944/45 a total of 3,248 dunums was planted in cereals. (Zochrot)

On December 28, 1947, a bus of members of the Zionist paramilitary group, the Stern Gang (whose commander, Yitzhak Shamir, will later proceed to be Israel’s Prime Minister between 1986 and 1992), stopped in front of one Lifta’s coffeehouses and opened fire with machine guns on the patrons, killing six of them. This act of terror succeeded in its aim, as a part of the 3,000 terrorized residents fled the village in the days following the attack. In January 1948, the Stern Gang in association with another Zionist paramilitary group, the Irgun (whose commander, Menachem Begin, also later became the Israeli PM, and whose name was cynically used to name the boulevard adjacent to Lifta) continued the ethnic cleansing of the village and eventually succeeded in evicting all residents by the beginning of February. Some of them still live as refugees in East Jerusalem and Ramallah.

The importance given to temporality is crucial here as it fundamentally debunks the Israeli national narrative that only acknowledges the massive displacement of half of the Palestinian population (750,000 people) in 1948 as the result of the war against the soldiers of the Arab League that started the day the British colonial mandate ended and the State of Israel was promulgated, on May 15, 1948. Similarly to an important proportion of the 417 Palestinian villages that were evicted and destroyed in 1948, the ethnic cleansing of Lifta occurred several months before the Mandate ended and the war started — the fact that the Israeli army has consistently engaged two to three times more soldiers in this war than the Arab League that mostly concentrated its forces in bordering regions of Palestine also strongly contests the narrative of Palestinian villages being evicted, mined, and destroyed following symmetric and fierce combats. Nationalist narratives do not seem to embarrass themselves with the accuracy of history however, and accounts of Lifta’s violent eviction are often explained in a conveniently ambiguous or plainly false manner in order to forcefully comply with the Israeli national narrative as the following examples illustrate: “The population was driven out during the Arab-Jewish hostilities of 1947/48” (Wikipedia), “It is one of 400 villages abandoned by Palestinian inhabitants during the 1948 war” (Haaretz), “Lifta was one of hundreds of Arab villages that lost its residences during the 1948 war” (NPR). 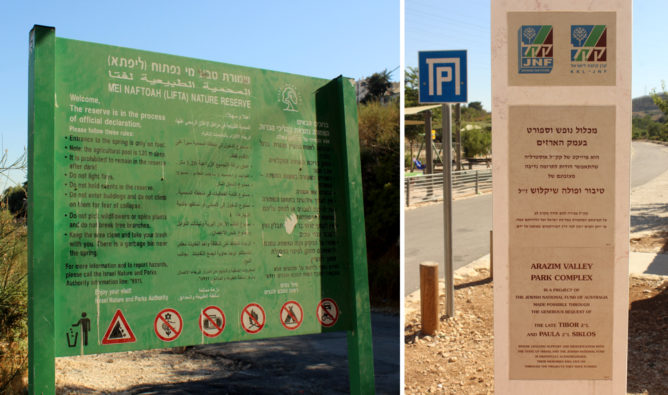 Similarly to many other Palestinian villages’ ruins in what is now Israel, the territory of Lifta has been turned into a natural reserve (called Mei Naftoah as to insist on the antic Jewish name of the place in denial of the last 2,000 years of the village’s existence) that operates under the Israel Nature and Parks Authority’s rule, while its surroundings have been turned into a park and a playground by the Jewish National Fund (JNF) that historically raised funds among the Jewish diaspora to buy land in Palestine and, starting in 1948, started to allocate these funds to the plantation of forests that covered the last remains of these villages, as I have described more at length in the articles “‘Make the Desert Bloom’: Manufacturing the Israeli Territory/Narrative” (April 2015), and “Israeli Forests on Fire: The Political History of Pine Trees in Palestine” (November 2016). 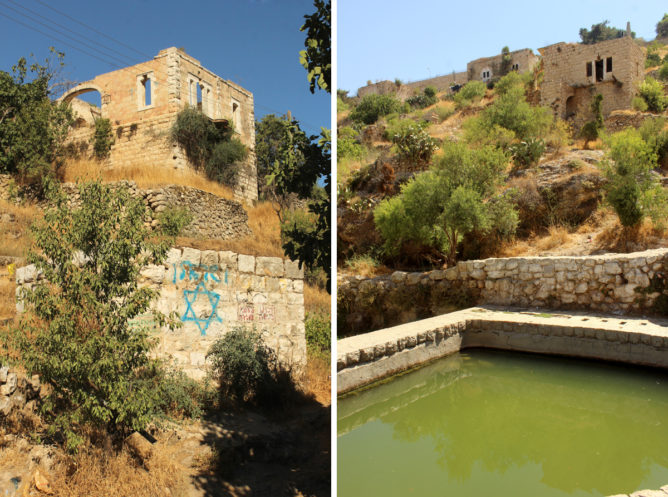 The cistern of the village, mentioned on the Reserve’s rule board above, is regularly used by orthodox Jewish men (including during my visit), who bath next to an Israeli David Star graffiti drawn on one of the stone remains. One finds also garbage in various places of the village, proof of the continuous desacralization (both in its deliberate and non-deliberate forms) of the Palestinian memory of the place. In 2010 however, a coalition of Israeli and Palestinian activists was formed under the name “Save Lifta” in resistance to a government-and-municipality-backed luxurious real estate project in place of the village remains. As described by Nina Valerie Kolowratnik in a 2014 conversation for The Funambulist podcast (partially about the architecture studio on Lifta that she was then leading with Nora Akawi at Columbia University), this coalition may not necessarily agree on the proper way to narrate Lifta’s history nor on the right to return for Palestinian refugees, but it was somehow successfully built on the common denominator of the resistance against the destructive plan. Although the various actions organized by the coalition have significantly slowed down the process, the closest houses from the symbolically named Ben Gurion Boulevard were destroyed at the end of 2016.

In August 2010, Palestinian architect Antoine Raffoul talked about launching “an International Architectural Competition with an open-ended brief, and to invite registered planners and architects from all over the world to contribute ideas and to produce schemes for one of the Lifta houses still standing” (The Electronic Intifada). Although one can certainly see how the proposal of constructive alternatives makes a strong case in the judicial battle to come to “save Lifta” (which may admittedly have not been Raffoul’s aim), one can also see how no stronger testimony of the Nakba violence could emerge in Lifta in the colonial structure of the Apartheid than through the resilient ruins of the village as they currently stand. As described in a few articles on this blog (including those cited above), the ruin incarnates an architectural crystallization of the past life of a building (or urbanity), as well as of the conditions that ended this life. The large majority of Palestinian villages evicted and destroyed in 1948 were deliberately deprived from their “right to the ruin” and, as such, only their known absence is able to account for the violence of the ethnic cleansing. Lifta, on the contrary, incarnates a stone evidence of the Zionist historical and sustained violence against Palestinians at the core (the central bus and future train stations are nearby, as is the iconic tram bridge designed by architect Santiago Calatrava) of a city that the Israeli government claims to be its capital. It is therefore no surprise to see this same government involved in its destruction, and it makes no doubt that any approval on its end of a “rehabilitation” process of Lifta would be tainted with (if not instrumental to) the denial violence of the Zionist narrative. Architecture competitions (or university studios) are however a good way to think architecturally, not as a means to propose alternatives in the context of an Apartheid state but, rather, as a way to produce imaginaries beyond and against this state, as Palestinian architects Elias Anastas, Yousef Anastas, Nora Akawi, Victoria Dabdoub, Dima Khoury, Inas Moussa, Ahmad Wa’ary & Mahdi Sabagh undertook through the 2012 exhibition Re:Lifta at the Yabous Cultural Center in East Jerusalem. Regardless of the specificity of each vision, the agency seized by Palestinians to design for a decolonized Lifta is what the matter the most here, since the ability to create imaginaries of a future where such an agency can be materialized (as afrofuturism teaches us) is specifically what is violently denied in the colonial territorial and narrative domination. 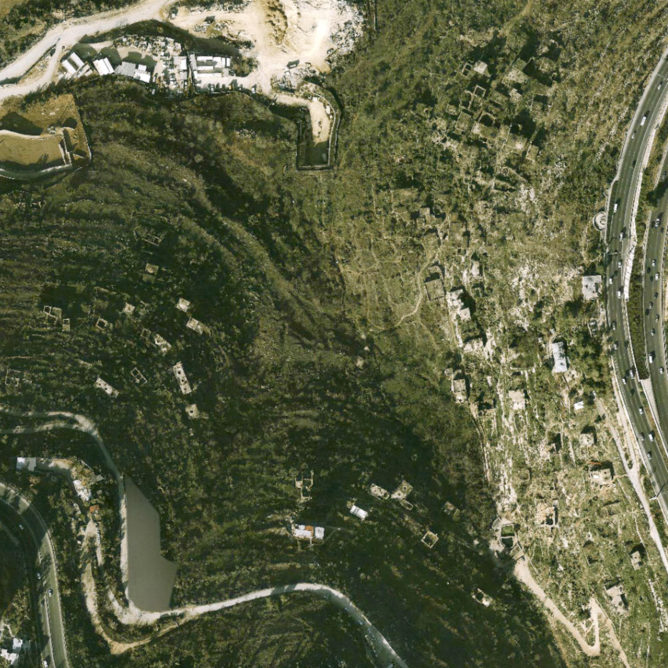 All photographs below and above by Léopold Lambert. Creative Commons Attribution-NonCommercial 4.0 International /// 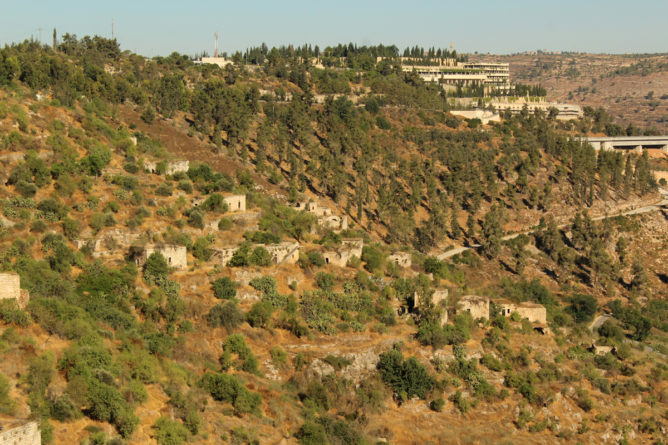 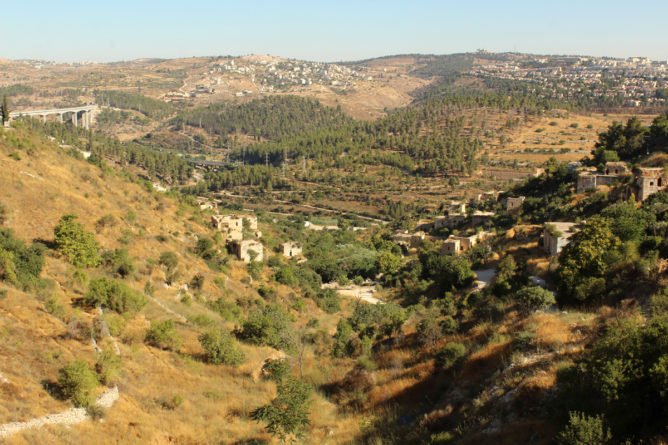 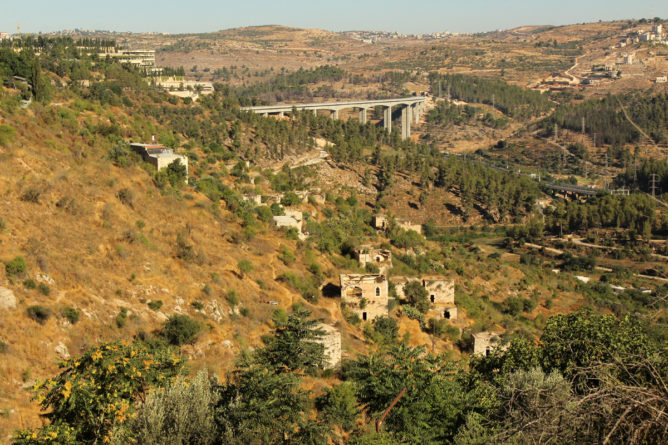 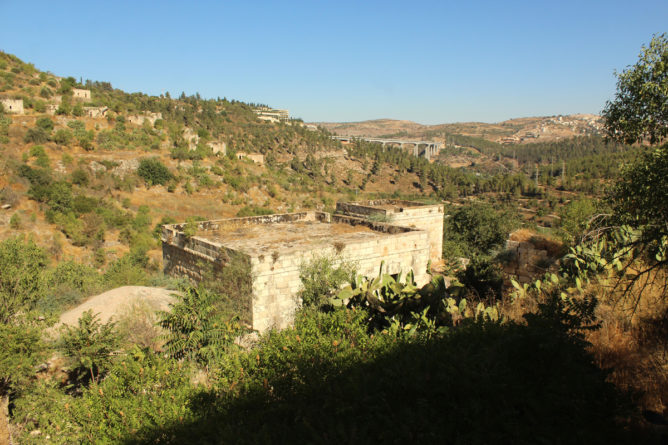 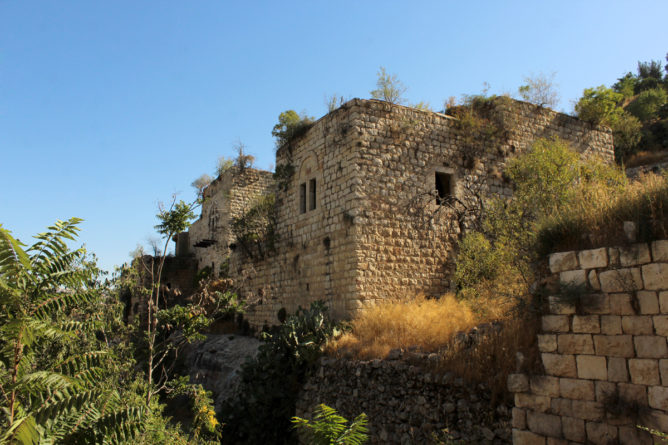 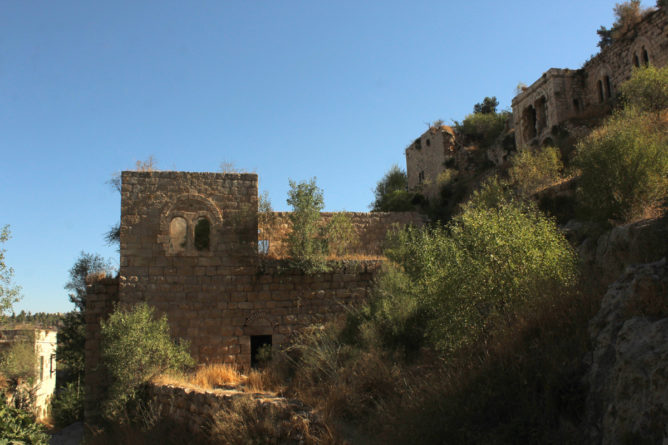 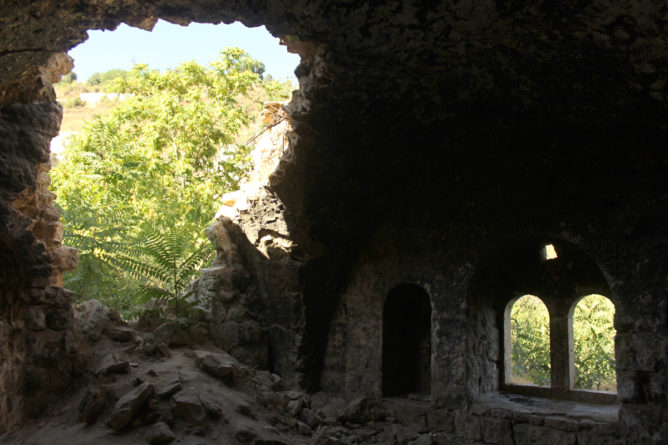 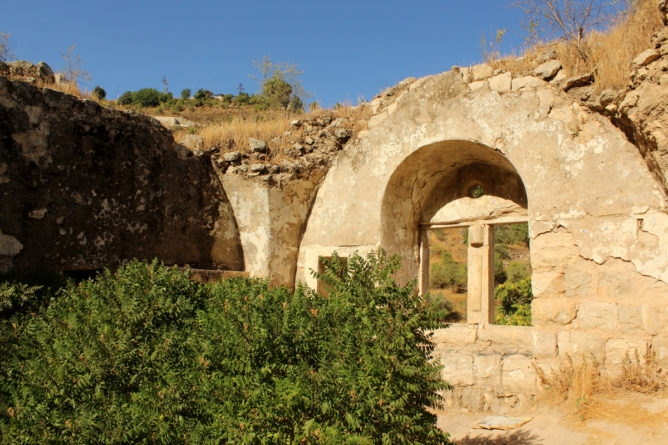 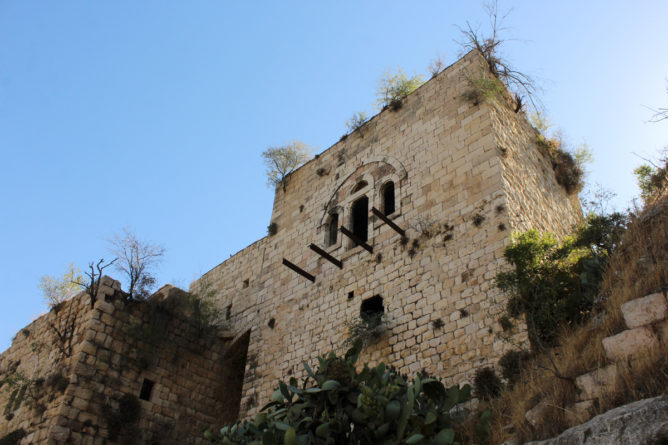 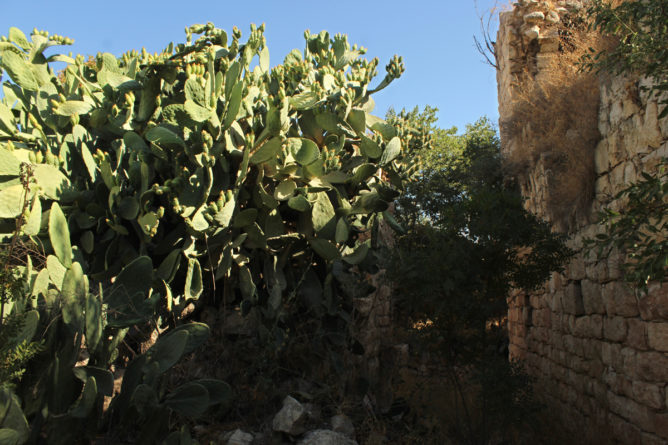 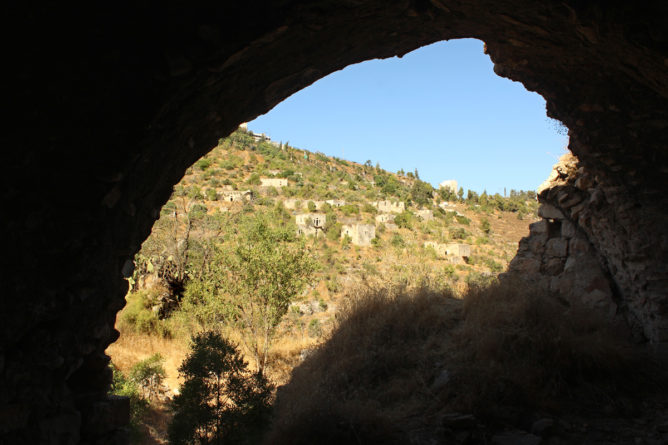 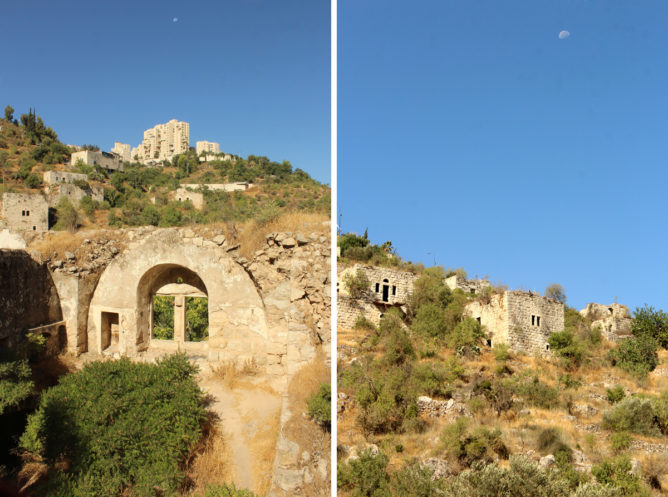 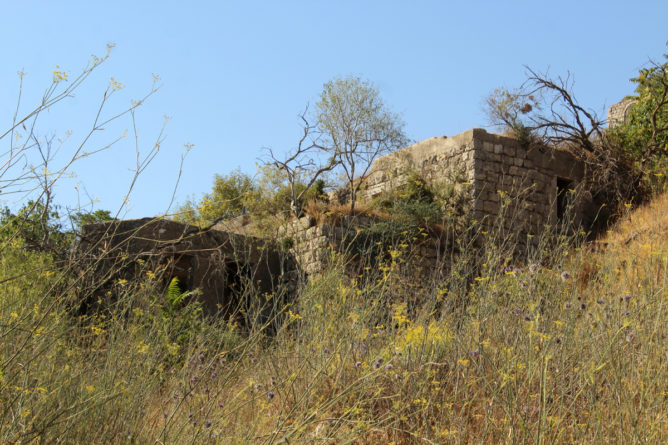 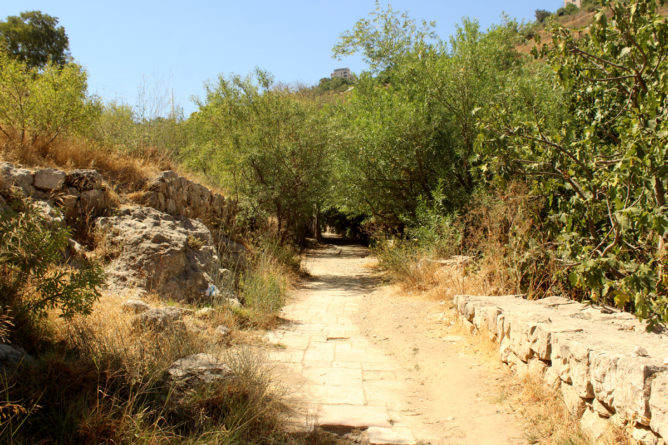 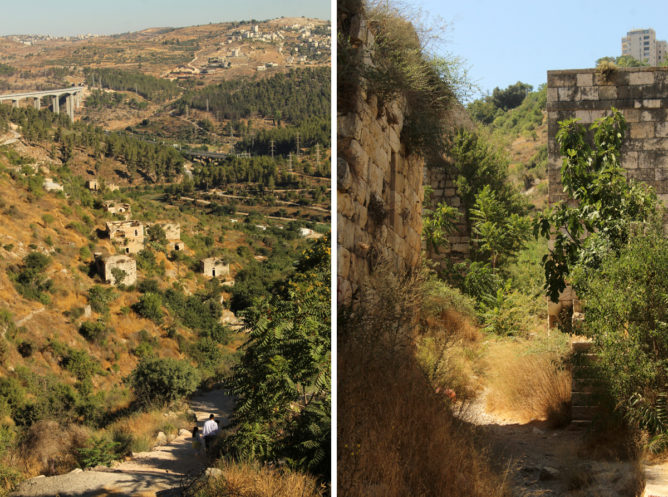 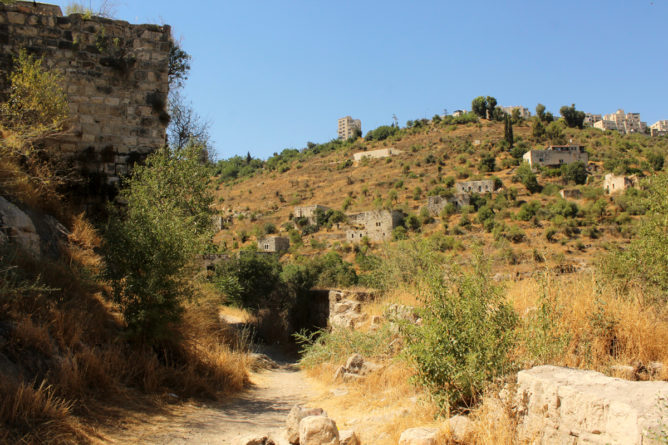 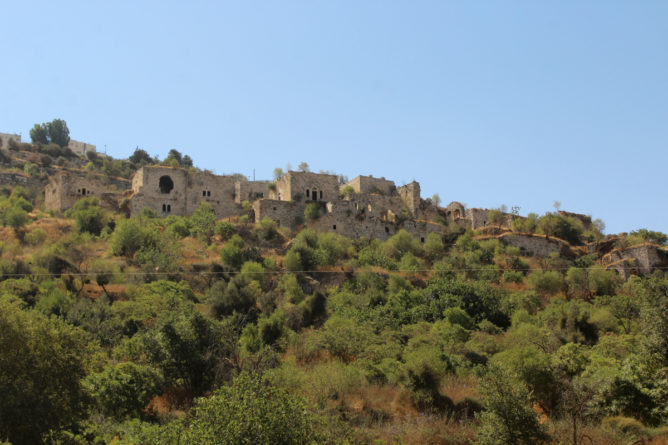 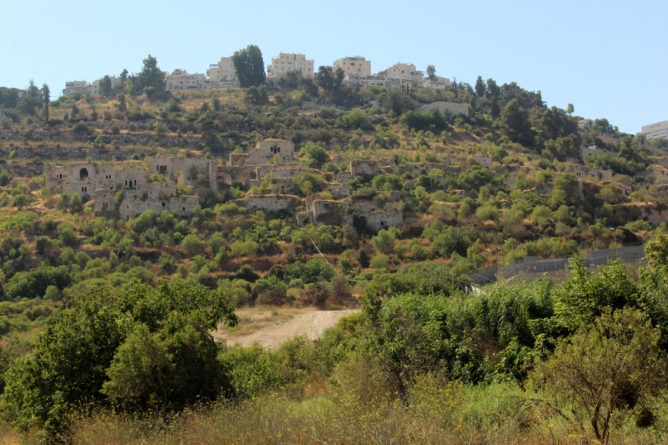