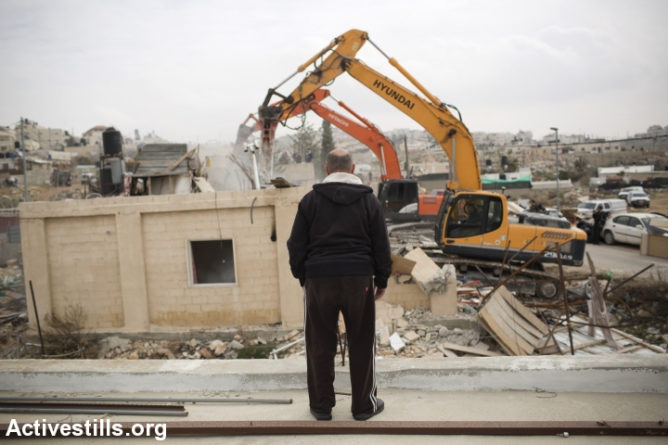 As I have been writing in the past, I try to refrain myself from writing about the phenomenal aspects of the Palestinian struggle against the occupation to concentrate on the structural aspects. Sometimes, it is particularly difficult to exercise such refrain, like it is now when one sees the wave of anti-Arab racism that seems to currently materialize in Israel; however, we would condemn ourselves to perpetuate the effects if we just focus on them without examining their structural causes. The legal and political organization of the apartheid in Palestine needs to be continuously addressed.

Last week, online magazine +972 published an article, written by Michael Omer-Man, reporting about the “return of punitive home demolition” by the Israeli army in East Jerusalem and the West Bank. This punitive measure had been stopped in 2005 following an army report affirming that this type of punishment was (unsurprisingly) failing to constitute a deterrent to what it defines as “terrorism.” The house concerned by the demolition order in this case belongs to a Palestinian man accused of having killed an Israeli off-duty police officer and wounded his wife and two children. According to Omer-Man, this man has been accused but not convicted, which reinforces the arbitrary injustice of this punitive measure. However, focusing too much on whether a person subjected to justice have been convicted or not would ultimately implicitly legitimize the punitive measure of home demolition, since it would shift the concern from what this punishment means to the individualized judicial cases of the people subjected to it. I would like to therefore question this punitive measure for what it actually means.

The first observation that needs to be made is that a home is rarely individualized. The very notion of home as it is understood in English signifies simultaneously the material conditions of dwelling, and the social link between the bodies that live in it. Through this punitive measure, all bodies who live in this “home” are de facto punished with the judged body. There is thus a collectivization of punishment, which is in complete contradiction with the founding of modern justice. Such a collectivization of punishment is at the core of the function of apartheid as it distinguishes each body into two clear categories “us” and “them.” In other words, by creating a systematic and unproven link between people from the same ethnic group, it de facto essentializes a separation between them and the people of the ethnic group that exercises this form of (in)justice.

The second argument against this punitive measure is of similar concern. I would like to argue that the collectivization of punishment is not limited to other bodies who live in the same home than the person subject to justice, it also applies to architecture itself. I usually describe architecture as a materialization of diagrams of power and control, but I don’t think that it would be contradictory to recognize to the architecture of home the ability to embody a vessel of memory and culture for the people living in it as well as for people who have been familiarized to it. The level of memory and cultural significance varies depending on the architecture affected, yet it is inherent to all dwellings. A home might have been transmitted from generation to generation in a given family, it might have constituted a particular communal site in a given town, it might have embody an architectural heritage participating to the collective narrative of a nation (see past article about what I called “the right to the ruin”); in any case, what is being destroyed through the home demolition punitive measure has little to do with what a court is subjecting to its judgment.

In definitive, home demolition punitive measure is only different from the bombing of homes like the one occurring regularly in Gaza (these last days for example) in the non-implication of their inhabitants in its energetic violence. This difference is highly significant, of course — the arguments carried here will never be that a building’s ‘life’ is comparable to a human one — however, it does not alter the fact that both of these violent measures operate within the same logic. In both cases, it cannot legitimately claim the status of judicial execution: it is an act of war. Bombing is an explicit form of war, punitive home demolition is an administratively organized unfolding of the violence of war.