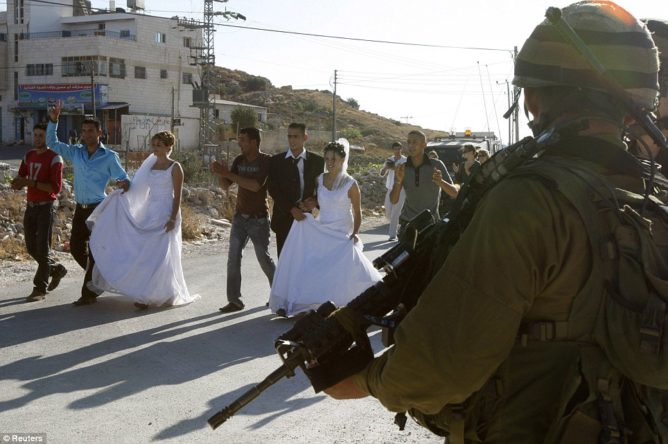 Israeli soldiers stand guard as Palestinian couples participate in a protest against the Israeli barrier before their wedding in the village of Al-Masara. (West Bank, July 2009) (source)

This article was originally thought in the perspective of the 72-hour ceasefire in Gaza that finally lasted only for 2 hours yesterday. It wanted to ponder on the idea that things will go back to a certain degree of normality: we usually think of “going back to normal” as a genuinely good thing that we should wish for. In view of the horrific massacre that is still perpetuated by the Israeli army in Gaza, it would be hard not to think that such return to normality would be fundamentally good: families would no longer be shattered by the systematic death machine of the Israeli bombs and “life” would re-organize itself little by little in the Gaza strip. In many historical contexts, these observations would be legitimate despite the fact that they usually forget the ‘invisible’ part of the war’s aftermath: mourning and trauma. For Gaza (as well as for the West Bank and East Jerusalem), on the other hand, a return to normal is unacceptable.

As illustrated through a recent map, Gaza’s normality is inherently contingent to the Israeli militarized administration that manages the flux of all people, goods, food and energy through its blockade. No one will argue that the State of Israel shows any benevolence whatsoever for the Palestinians; this dependency therefore maintains a continuous state of siege, from which the normality that can emerge can only be perverted. The unique power plant in Gaza has been bombed this last week, triggering massive blackouts and preventing most of Gaza inhabitants from the use of light, water pumps, phones, etc. As Israeli bombs also destroy several bakeries and other food facilities (not to mention the impossibility of any agricultural activities in these conditions), food also became scarce, in particular for the 520,000 refugees living in the Gaza strip. All these aspects of daily needs won’t be “returning to normal” for a long time as they necessitate important works of reconstruction and re-organization.

The practice of normality is however a strong political weapon when everything around you is actively preventing this same normality to occur. We can think of one of the first scenes of Gilo Pontecorvo’s Battle of Algiers (1966) that dramatizes the wedding of two young militants celebrated by a FLN (National Liberation Front) officer during the Algerian struggle for independence. In many geographical and historical context, a wedding could be legitimately considered as a relatively conservative perpetuation of social norms; yet, in certain cases, the same celebration can materialize an act of resistance against colonial apparatuses that ensure that normality cannot be practiced. Similarly, the resilient function of schools (137 of them have been shelled in Gaza in the last three weeks) and religious buildings despite the siege constitutes a refusal to “let war win.”

Some aspects of normality are however not let to choice. In the conversation I had with Derek Gregory for Archipelago (May 2014), he exposed his latest research about bodies suffering of cancer or other ‘normal’ diseases when confronted to a situation of war. Like any other sick bodies who do not have to suffer from a similar situations, they have to receive regular care and treatments, which is made extremely difficult by the hospitals’ dedication to bodies wounded by the war, as well as their lack of appropriate drugs (and in the case of Gaza, the occasional bombing of these hospitals). Some of these people have to therefore migrate to find appropriate structures for their treatment, with all the difficulties that such displacement involves both at a geopolitical and biological level. In Gaza, such a displacement is not even an option as all borders are closed. People suffering from diseases are therefore more likely to severely suffer from them, if not die from them in the absence of treatments.

Such a vulnerability is also to be noted in another situation of ‘forced normality’ : war does not put pregnancies on hold, and women need to be able to receive appropriate care while being pregnant and giving birth. The precarious conditions of Gaza’s hospitals regularly shelled and whose drug stocks were missing 40% of the essential list at the beginning of the on-going Israeli army operation. Who knows how much they are missing by now (according to today OCHA’s report, only 17% of the water, sanitation and hygiene, and only 38% of the health and nutrition budgets are currently founded in Gaza). As argued in a previous article, even when both the newborn baby and their mother are both safe and healthy, the conditions of pregnancy, birth, and maternal care under such conditions, whether we talk in the context of the current massacre or of the ‘normal’ state of blockaded Gaza, could not possibly have no incidence on both child and mother’s physical and psychological well-being. All products intervening in the daily ‘normal’ life of Gaza being either manipulated and regulated by Israel, or smuggled from Egypt — both cases are determined by the blockade — no aspect of life can possibly be preserved from the perverted logic of war that compose this simulacrum of normality.

In conclusion, if a durable ceasefire is implemented in the coming days or weeks without the dismantling of the militarized blockade, the external viewers that we are will celebrate the disappearing of the exceptional violence of the massacre without realizing that the normal violence will still be operating at a less visible, yet absolutely actual level. The very logic of apartheid is to function through normality as much as through exceptional violence. We should therefore put as much effort in our outrage against the violent death of 1,439 inhabitants of Gaza (OCHA figure), than against the normal violence of a blockade that affects 1.7 million of people in their daily life.