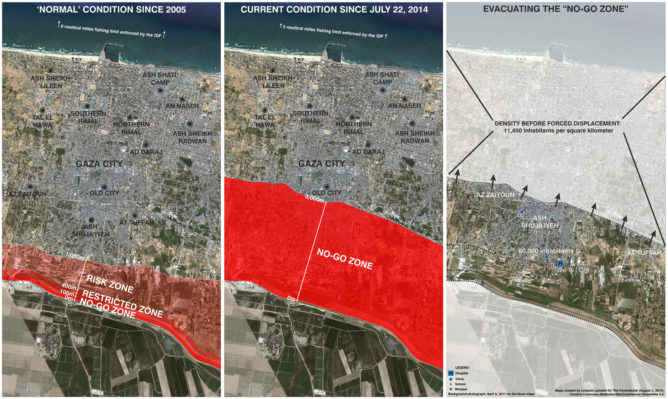 The horror continues to be perpetuated by the Israeli army in Gaza. I have to be honest, I write these articles and draw these maps as much by political urge as by cathartic necessity — hopefully, both can work together. This text attempts to work as a complement to Derek Gregory‘s recent article entitled “The Dead Zone” (Geographical Imaginations, August 2, 2014). It focuses on the recent 3000% increase of the “no-go zone’s” width that borders the Gaza strip, thus forcing close to 500,000 Palestinians to be displaced (source: UN OCHA)

The Israeli army, as we saw through the examples of land expropriation in the West Bank, and of the so-called “knock on roof” tactic in Gaza, is particularly fond of manufacturing legal fictions that provides a simulacrum of legitimacy to its action. The three zones that border its separation wall with the Gaza strip are exemplary of this strategy (see map 1): The 100 meter-wide “no-go zone,” enforced by remote controlled machine gun, is complemented by two offset areas (300 meter-wide and 1,000 meter-wide) that both include a certain amount of agricultural fields and, in certain cases, houses. The widest area, euphemistically called “risk zone,”  sees several dozens of Palestinians get shot every year for simply being in it — a brief look at map 1 and 3 will expose the extents of Palestinian activity in this zone. On July 22, 2014, the Israeli army increased the width of the “no-go zone” from 100 meters to about 3,000 meters (see the July 23 OCHA map) reaching the central road of the Gaza strip and reducing the accessible Palestinian territory to 56% of its ‘normal’ area — as explained in the previous article, the term normal cannot possibly be neutral here.

Let’s be clear however: we would be profoundly mistaken if we were to think that this means that 56% of the Gaza strip constitutes a relatively safe place in comparison to the “no-go zone.” Since the maps created for the sake of this article focus on the Gaza city area, one can simply look at the inventory of material damage inflicted by the various bombs of the Israeli army in this part of the strip (source: UNITAR) to understand that absolutely no place is safe in Gaza. Nevertheless, it would be erroneous as well to think that the legal fictions created by the IDF have no effects on the Palestinian population: more than 1 person out of 4 has been displaced in the last four weeks whether evacuating this zone or finding themselves homeless from the bombing of their house.

Once again, the legal fiction that consists in the creation of zones where any living being (13 year-old included) can be considered as belligerent and thus killed, is based on a manufactured sanctity of the warning act. In any other context, such a rationale would be universally considered as threat and intimidation, which could not possibly legitimize any crime that would follow them. Map 3 is made to illustrate how populated the newly established “no-go zone” is. In it, schools, hospitals, clinics, mosques, and houses are being systematically bombed as the UNITAR map (July 25, 2014) illustrates — this map and map 3 show the same neighborhood of Ash Shuja’iyeh (60,000 inhabitants). Admittedly, I considered through this maps one of its densest part (the Eastern part of Gaza City), but I could have just as much focus on the North-Eastern part of the strip where the entire town of Beit Hanoun (35,000 inhabitants) and its hospital are now situated in this zone. Furthermore, as often argued here, we also have to pay attention to the resources of Gaza, that feed literally and economically its population. In this regard, the agricultural area that is now within the “no-go zone” is massive, and the noxious consequences of such a situation will last for a substantial amount of time.

Forced displacement is tragically not new in Palestinian history. In 1948, close to a million Palestinians were displaced from what became Israeli territory to neighboring territories (West Bank, Gaza, Jordan, Syria, Lebanon, etc.). This time, it is half a million of Gaza inhabitants who are pushed to the sea, thus symbolically enacting the regional genocidal speech of “putting the (Arabs or Jews) into the sea.” No one knows when this forcefully displaced population will be able to move back to their homes, which are unlikely to be intact when they actually do so. The density of Gaza City was already of 11,450 inhabitants per square kilometer (New York’s is 2,050) before this displacement was enforced, thus forcing us to envision the extreme density that will result from it in the conditions of a continuous siege where no place could possibly be considered as safe. Displacement tragically always happens in the context of war — 9 millions Syrians are said to have fled their homes since the beginning of the civil war — yet, Gaza is particular for that matter as the only area to where one can flee is almost as much bombed than the area one is forced to leave. Once again, the true horror emerges from this observation that Israel — well helped by Egypt, it ought to be noted — has enclosed its war field — one might say its experiment fields as explained in a 2012 article — and occasionally massacres the population that it contained within this set perimeter. The forced displacement they recently implemented functions within the same logic, reducing Gaza to a minimal inescapable territory.

Sources used for the maps ///