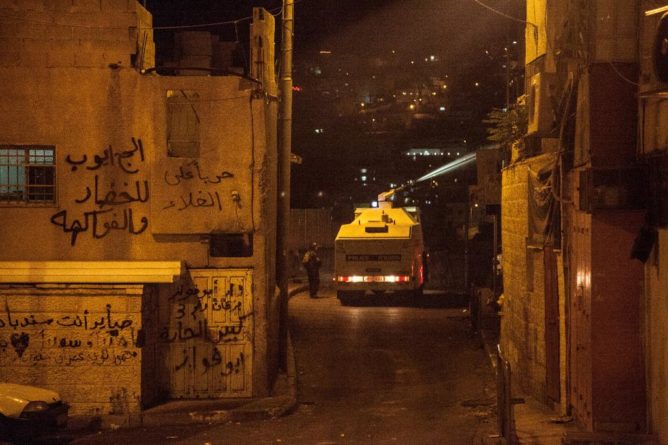 As atrocious as is the Israeli massacre in Gaza, we should not forget to address the (current and continuous) situation in the West Bank and East Jerusalem. As Rashid Khalidi explained yesterday in an article for the New Yorker, the siege on Gaza is not merely about what it claims to be (a “war” on Hamas): it is “a collective punishment” for the reunion of the Palestinian Authority and Hamas, as well as a re-affirmation that Israel’s control on Palestinian territory should be absolute. Five days ago, massive Palestinian demonstrations in the West Bank and East Jerusalem have been suppressed with great violence by the Israeli police/army, killing seven people and injuring hundreds of others. After the violent suppression in East Jerusalem, the Israeli police implemented another form of collective punishment: the systematic and methodical spraying of “skunk” (pestilential water) on Palestinian houses and buildings. This militarized tactic certainly carries the problematic aspects of the water cannon in terms of suppressive arbitrariness (about which I wrote a few months ago), but it goes much further: it implements a collectivization of punishment after the events. In this regard, we cannot help but notice that both the collectivization of punishment, and its implementation in the ‘coldness’ of the aftermath correspond much more to a mobster logic than to one of a nation-state.

The fact that these despicable operations are accomplished methodically by the Israeli police excludes any exceptionalism associated to this practice; on the contrary, it tells us about the state-implemented racist imaginary that legitimizes such tactics. This imaginary is the same that currently makes many Palestinian Israelis afraid for their lives when being recognized as Arabs (by their appearance, their language, or their accent) by antagonist groups of Jewish Israelis.

The “skunk” that infiltrates Palestinian houses and stick to bodies and objects for a few days in its pestilence, carries clear similitude with the way one usually treats rats, insects and vermin: it attempts to make their targeted entities flee an area by developing an atmosphere unproper to their lives (perpetuated by breathing). Such tactic can only be used if there is a conscious or unconscious consideration for sprayed bodies and objects as fundamentally abject. As introduced in a past text, abjection is defined by matter being “out of place” (Mary Douglas, 1966) resulting for a body who considers (and attribute) abjection, to clean-up this same matter.

In the context of Palestine, such envisioning of Palestinian bodies and goods as abject, is manufactured by the original racist fiction of a “peopleless land for a landless people.” Whatever would deny this statement (say, people living on this land for example !) would inevitably destroy the fundamental narrative of Zionism: there is therefore a need for Israel to implement this narrative by all means, namely to make this land peopleless in order to retroactively implement the original narrative.

Of course, the air and land bombs dropped by the Israeli army in Gaza are dramatically more expressive of the fundamental violence that perpetuate Israel’s existence as it wants it to be. As horrible as it must be to live for two or three days with no escape from pestilence, it cannot be compared to the absolute destruction of one’s home and the killing of one’s loved ones. Nevertheless, what the Israeli Police’s pestilential water illustrates is somehow more profound in the fundamental racist essentialization of the Palestinian people, and its systematic administrative oppression. As written in a recent article about the administrative demolition of Palestinian homes, collective punishment is, by definition, the essentialization of a “us” and a “them,” since only such an essentialization would necessarily associate a body with others in the context of judicial and administrative decisions. Through essentialization, “skunk” is thus consistent both in its status (collective punishment) and in its means (pestilence). The latter’s invisibility — it cannot be communicated ” to the outside” by photographs for example — represents the administrative aspect of the daily occupation. It also places the occupation not merely in the realms of the land, but also in the atmospheric one, which allows me to finish this article in the same way than another recent one, by a quote of Frantz Fanon about the “combat breathing”: