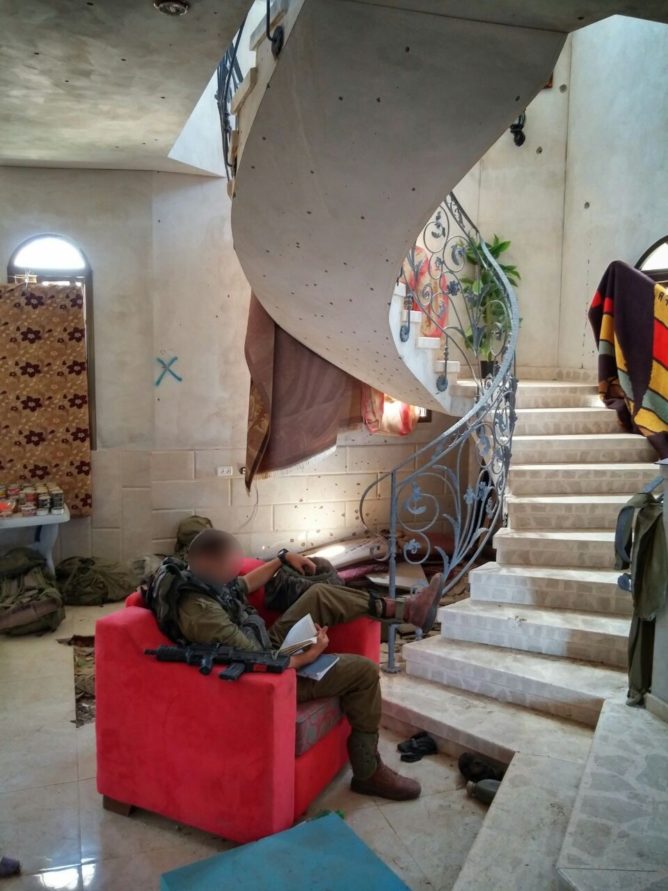 Photograph from the “Breaking the Silence” report

Léopold Lambert – Paris on May 5, 2015
If you enjoy articles of the blog, have a look at The Funambulist Magazine!

The Israeli organization Breaking the Silence has just released a 237-page report of soldier’s testimonies following the dreadful siege on Gaza in July and August 2014, which killed 2,200 Palestinians, including at least 1,492 indubitable civilians (OCHA numbers). There is already a lot that has been written yesterday and today about it, from the newspapers pretending to believe that the atrocities described by the Israeli soldiers themselves constitutes some exceptional misbehavior when, actually it is clear in the reading of these testimonies that they are the war’s modus operandi, and corresponds to orders (or the absence of orders), to more interesting articles written in the Electronic Intifada, +972 Magazine or on Geographical Imaginations. It therefore does not seem so useful to add a description of what is only an (admittedly important) confirmation of something we already knew. What I can propose however, is to state a few points about which we should be careful when we read these testimonies from sixty-five Israeli soldiers.

The first point is relatively obvious but remains important to state: the only context in which a crime confessed is a crime absolved is if the victim of this crime agrees to it; in the case of Palestine like it was in the case of 1990s South Africa, it means in the very specific context of a “truth and reconciliation” commission, organized in very specific conditions for the very specific goal of establishing a just national narrative in which crimes are acknowledged but not avenged. What this means in this specific case is that the act of giving a (regretful or not) testimony to Breaking the Silence does not absolve its author from his/her participation to the organized war crime this siege has been, and any justification based on the chain of command’s responsibility would be an insult to the braveness of the young Israelis who refuses to serve in the army and subsequently go to jail.

The second point consists in the acknowledgment that these testimonies, however useful to establish details, brings back the discursive trope, once again, to the Israeli bodies, rather than Palestinian ones. When one reads the main Western newspapers, it is as if reality can be accepted only if told by its perpetrators, never by those who suffer from it. In this regard, we can compare these documents to the many other truth discourses that some White people regularly produce in the form of an expression of privilege (the “I am not Trayvon Martin” series, for instance), which ultimately only perpetuate their self-centered experience of society without seriously compromising this hierarchical structure. Admittedly, the work of Breaking the Silence is primarily addressed to an Israeli public, which attenuates this critique, but does not make it disappear since the Israeli society’s imaginary does not include enough Palestinian subjectivity.

The third point is an extension of the second and can be found in the systematic desincarnation of the Palestinians living in the Gaza Strip throughout these testimonies. When reading the testimonies, we understand that there is something fundamentally wrong about them, yet the various atrocities described through them cannot be said to happen against experienced living bodies, but rather against vague forms and silhouettes encountered for only a few seconds before being lost in the smoke of tank shells, drone bombs, or D9 bulldozers’ demolitions. The testimonies illustrating this lack of Palestinian incarnation do not seem to have make the cut of the articles I read, but there are also informative in that the absence of vision seems to paradoxically legitimate the systematic shelling by the Israeli tanks, rather than preventing it (see testimony 6 for instance, pp32-34). The imaginary of a ghostly invisible enemy is not new for dominant asymmetrical armies. In their invasions of Vietnam and Afghanistan,  many American soldiers have been describing such a desincarnate enemy that can be legitimately destroyed when perceived as such, since the lack of materiality seems to equal the lack of humanity.

To conclude I would say that the work accomplished by Breaking the Silence is significantly useful for the amount of information it allows to gather about the methodical deployment of military violence against the Palestinian population of Gaza. However, a moralized reading of it might go against the principles it aims to support, since it would judge the conditions in which the siege on Gaza unfolded, rather than its very essence. This reading would thus retroactively justify the logic of this dreadful operation, since it would imply that there are conditions for which its action could have been legitimate. Just like we should never establish exclusive figures of innocence like it was often done by self-proclaimed “balanced” medias last summer through the bodies of the Gaza children (see past article about this topic), we should refrain from moralizing the conditions of a war that fundamentally violates any sense of justice to begin with.