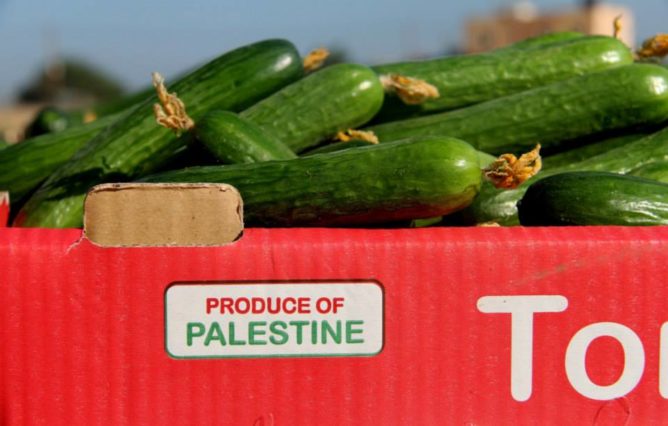 As occupied East Jerusalem currently provides us with more images of violence between the (armed) Israeli police and the (unarmed) Palestinian locals, and while a Jewish orthodox organization called for a provocative demonstration today on the Dome of the Rock’s esplanade, it would be once again easy to focus only on this spectacular and ‘photogenic’ violence, when the normal one, triggered by the occupation on a daily basis, continues. As argued in a recent paper, forgetting the “normal violence” only perpetuates the status quo, since the occupation can thus perpetuate itself between peaks of spectacular violence and periods of mediatic calm. This ‘calm’ is characterized by the ‘atmospheric’ nature of the violence, inescapable and continuous like the air that surrounds our bodies.

This article intends to examine one of this atmospheric aspect: the dependency of Palestinian economy on the Israeli one. Yesterday, the Israeli NGO Gisha (Legal Center for Freedom of Movement) announced that after seven years of Israeli ban on food produced in Gaza for the West Bank, a truck had been authorized to transport ten tons of cucumbers from the former to the latter. The fact that such a small cargo could be that newsworthy should certainly makes us wonder about the way the occupation also implements itself at an economic level. Thinking of the latter simply in its ‘negativity’ (i.e. its propensity to damage Palestinian lives) would be missing an important aspect of the Israeli strategy in this matter, and would therefore prevent us from seeing why Israel has deep interests in the daily exercise of the occupation. Instead, we need to think of this strategy as the colonial production of economy in favor of the colonizer. Colonies were not merely characterized by the take over of resourceful territories for the colonial empires, but also by the capture of nations to be used as exclusive and dependent consumers of colonial products — the tax itself being one of them. The implement of the colonizer’s currency in the colonies (like it is the case in the Palestinian territories) is also instrumental to this dependency.

The current economic relation between Israel and the Palestinian authority is organized by the 1994 Paris Protocol (Protocol on Economic Relations). Although this protocol was signed by the P.L.O. as part of a 5-year interim agreement, these policies are still implemented today, fifteen years after they were planned to cease operating. One of the main dependency the Paris Protocol creates between the Israeli and the Palestinian economy consists in the indexation of Palestinian gas prices (currently $1.85 a liter) and value added tax (currently 16%) on the Israeli ones. Such an indexation prevents Palestinian products to be competitive against the Israeli ones, despite the difference in their production costs — also impacted by the occupation and its means of territorial fragmentation and land expropriation.

Agriculture was particularly impacted by the effects of the Paris Protocol. Under the pretense of symmetrical import/export between both nation’s food products (“Without prejudice to obligations arising out of existing international agreements, the two sides will refrain from importing agricultural products from third parties which may adversely affect the interests of each other’s farmers”), Israel has been using the asymmetrical freedom of movement to maximize its exportation to the Palestinian territories while minimizing its importation. Following the second intifada, the Israeli government even adopted a strategy of subsidies to its agricultural sector that continued to damage Palestinian products’ competitiveness (source: European Union Food Security Information for Action Programme, 2007). In a text entitled “Cultivating Dependence: Palestinian Agriculture under the Israeli Occupation,” (2009) that I already used in Weaponized Architecture, Caroline Abu-Saba describes how Palestinian agricultural products have to transit through Ben Gurion Airport in Tel Aviv to be exported internationally, and consequently how these same products are voluntarily damaged during this transit in order to decrease their quality.

The current calls for boycotting Israel‘s economy (among other sectors) therefore constitute an attempt to reduce the asymmetrical aspect of the economic relation between Israelis and Palestinians. The Indian struggle to independence certainly showed us the potential power of economic boycott, when it started producing its own salt and own clothes without any taxes paid to the colonial authorities. We can however look at the dependency of both economies as an opportunity to envision another future than the one that seems to be promise to us: the establishment of a Palestinian state as a dissimulated update of the Oslo Accords (see past article). Admittedly, the creation of the Bank of Palestine, issuing bills in a newly implemented currency will provide us with a strong historical symbol of emancipation; yet, we can already envision how this scenario won’t succeed in liberating the Palestinian economy from the Israeli pressure — in particular when it comes to think of the relation between Gaza and the West Bank with or without East Jerusalem. Only the vision of a territory where all citizens would have access to the economy without political restriction seems to challenge the unacceptable status quo, where normal violence continues to operate. Admittedly, I can already think of one problem that such a vision triggers, and I do not pretend to have an answer to it. There is indeed no “starting from scratch” when it comes to economy; this means that benefactors and victims of the current economic asymmetry would always carry this past advantage for the former, burden for the latter, thus perpetuating the historical violence of social relationships of power. This aspect of things needs therefore to be integrated within any project for the future of Palestine.