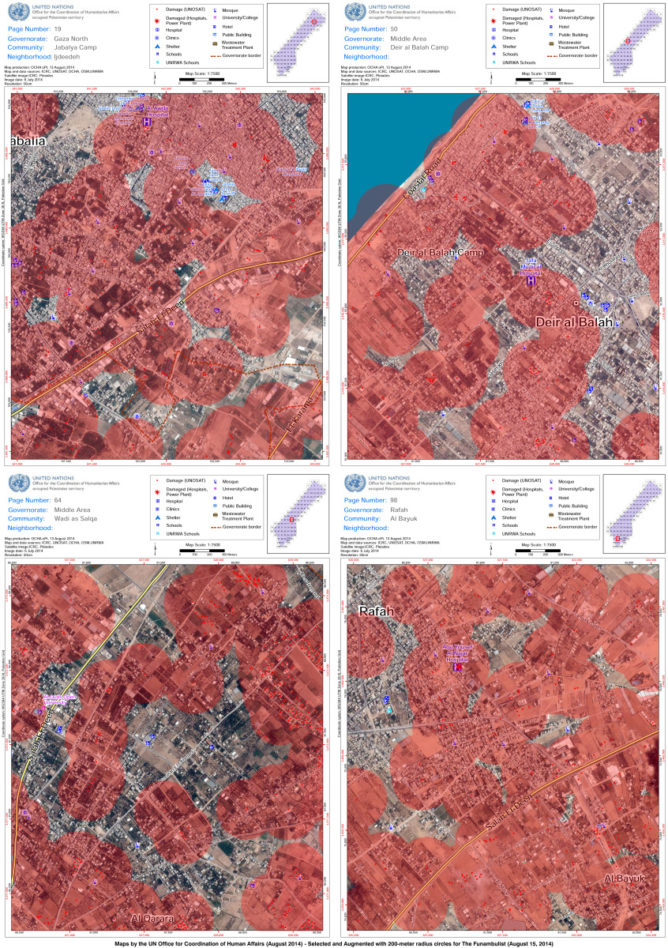 Maps of Gaza by the UN Office for Coordination of Human Affairs (August 2014) – Selected and Augmented with 200-meter radius circles for The Funambulist (August 15, 2014)
Download a high-resolution version of the map here (9MB)
(license: Creative Commons Attribution-NonCommerical-ShareAlike 4.0)

When it comes to the Israeli enforced organization of space in the West Bank and Gaza, one can always turns towards the UN Office for Coordination of Human Affairs in the Occupied Palestinian territories and the regularly updated maps they provide coupled with a multitude of important data. OCHA just released a 120-page “Gaza Crisis Atlas” that superimposes recent satellite photographs of the Gaza strip and their analyses in terms of damage imposed by the Israeli army bombing/shelling of this last month. Each red dot on these documents represents a destroyed structure, and it does not take much time to realize the amplitude of the bombings’ impact on the ground as red dots populate each page of the ‘atlas.’ What the precision of OCHA’s mapping fails to represent however, is the fact that a bombing is not confined to the violent physical destruction of a localized building, it also corresponds to an atmospheric volume of impact that I will try to expose in this article. In order to visualize this ‘atmospheric’ impact, I selected four pages of the OCHA ‘atlas’ and augmented each ‘red dot’ with a 200-meter radius circular red area. What this means is that everyone who lives inside one of these red areas has been experiencing at least one (often more) bombing in her/his immediate proximity — we can probably all agree that 200 meters equals immediate proximity when it comes to war. These four maps were selected for their representative characteristics in that some areas of the Gaza strip have been so heavily and systematically bombed that their maps would have been fully red, while a few other areas were more sporadically bombed, in particular in the less densely populated zones where the former Israeli settlements were situated. One of the map is in the North of Gaza, two others in the middle area, and the last one is near Rafah in the South, in order to illustrate how the totality of the Gaza strip was heavily affected.

The first aspect of the atmospheric impact that the Israeli army bombing has been having is the most immediate one: sound. The sound of bombs is haunting as it materializes a stop in time, a wait from which, one always realizes much too late that a bomb will explode nearby. For a month, the sound of bombs falling and exploding have been Gaza inhabitant’s daily sonic landscape. A few of them have recorded the sound of the bombs falling at various distances from their house. One, recorded by Farah Basil Baker is particularly poignant. If, like mine, your heart skips a beat when listening to it, we can begin to imagine without ever fathoming the continuous horror that this last month have been for Gaza inhabitants. The following recording by Emilie Baujard at the beginning of the bombings (July 21, 2014) that also illustrates the incessant noise of the Israeli drones also relates to this horror:

This brings me to the second aspect of atmospheric impact: fear. Who could escape from fear when knowing that a bomb has fallen less than 200 meters away from where they live? This is the fundamental principle of terrorism: its violence relies as much in the deaths and destruction it violently triggers as in its atmospheric effect on people situated nearby and/or who can identify to those who have been killed. We continue to attribute this notion of terrorism only to marginal armed groups that organize localized violent attacks on certain Western civilian population, but we miss to situate terrorism in the military operations of the Israeli and US armies that brings terror to another scale thanks to their hegemonic weaponry.

The third aspect goes back to the strictly physical aspect of the bombings’ damage. As I tried to describe in a 2013 article, an explosion essentially consists in a suddenly liberated volume of energy whose power of destruction is proportional to its distance (and therefore to its time) from its epicenter. What the OCHA red dot (i.e. destroyed buildings) therefore suggests is that the volume of energy of the bombs also affected surrounding buildings and bodies. This also includes the actual atmospheric characteristics of the zone, affected by the debris of the destroyed building. The fact that the surrounding buildings have not been indexed as destroyed building does not mean that they did not suffer from severe internal damages (walls destroyed, windows blew out, etc.), which necessarily affected their inhabitants in their health (from the potential cuts of a blew out window’s glass for example), as well as in their daily function. These bombings necessarily impacted the infrastructure of the city: roads, of course, but also water pipes, electrical wires — although the power plant having been bombed, power was ‘already’ scarce — and sewers that strongly affected drinking waters and triggered diseases among the Gaza population.

The four and final aspect of the bombings’ atmospheric impact that these maps attempt to illustrate is an affect at the scale of local communities. When living under continuous occupation, and now under siege, one certainly develops relationships to one’s neighborhood that link members of this local community in a much tighter manner than the one we can experience in large Western cities. These 200-meter radius areas therefore also attempts to represent how the death of a family, or the destruction of a given business or facility undeniably affect the social life of the concerned neighborhood, triggering sorrow, anger and mourning.

The ubiquity of the ‘red areas’ on the maps above shows how the entire population of Gaza is impacted by this month-long massacre conducted by the Israeli army. This article focused on the bombings themselves, as well as their ‘atmospheric’ impact but, as I attempted to describe in previous articles, this generalized impact is also maintained by the infrastructural aspect of the siege, the forced displacement of half a million of Palestinians toward the sea, as well as the continuous impossibility to “access innocence” (i.e. the right/luxury of innocence) in a situation of blockade/war. The figure of 1,973 Palestinians killed by the Israeli army’s operation is horrific, but it should not make us forget the fact that the totality of the 1.8 millions Gaza inhabitants is strongly affected by this siege. The reasons of why this impact extends in time are self-evident based on the arguments presented here: wounds need to be healed, buildings need to be reconstructed, the infrastructure needs to be brought back to a state of operation, fears and traumas have to be dissipated — one can legitimately doubt that this is possible — and, as we have seen in these recent days, unexploded bombs need to be defused. There seems to be a multitude of them across the Gaza strip and several people died from them days after they had been fired.