Léopold Lambert – Paris on April 26, 2016
If you enjoy articles of the blog, have a look at The Funambulist Magazine!

3 of the 13 drawings for Topie Impitoyable by Loredana Micu

Topie Impitoyable: The Corporeal Politics of the Cloth, the Wall, and the Street published by punctum books, 2016.

As announced a few days ago, I have a second book being published almost simultaneously with the first one, La politique du bulldozer (B2, 2016). Written (exceptionally) in French in 2014, this volume attempts to articulate a certain amount of ideas gathered under Michel Foucault’s phrase, “Mon corps, topie impitoyable” (“My body, merciless landscape” — topie impitoyable was kept as such for its alliterative qualities, pronounce it out loud to hear it!). It was then illustrated by friend Loredana Micu and translated into English by Anna Klosowska, and it is now published in its bilingual version by punctum books with which The Funambulist has been repeatedly collaborating these three last years.

Topie Impitoyable: The Corporeal Politics of the Cloth, the Wall, and the Street is more invested in raising the question of what a body is than in offering a definitive answer. Instead, it questions some stereotypes concerning structures located at various degrees of proximity to the body’s material assemblage, allowing a better integration of the surrounding objects, atmosphere and other bodies and proposing a political reading of their relationship to the body, whether deliberate or accidental. From the hoodie that Trayvon Martin wore when he was killed, to the streets of New York City during Occupy Wall Street and the apartheid wall in Palestine, this book moves through a series of episodes that illustrate how bodies and objects of all sizes are enmeshed in deeply entangled political relationships.

Topie Impitoyable was also published in Italian in 2015 by Emmanuele Jonathan Pilia and Deleyva Editore. In addition to thanking Loredana, Anna, and Eileen Joy along with the rest of the punctum books team, I would like to acknowledge the great influence that four friends had on my writings for this book, through their groundbreaking works:  Madeline Gins (whose poem “All Men Are Sisters” concludes the book),  Mimi Thi Nguyen, Minh-Ha T. Pham, and Eyal Weizman. 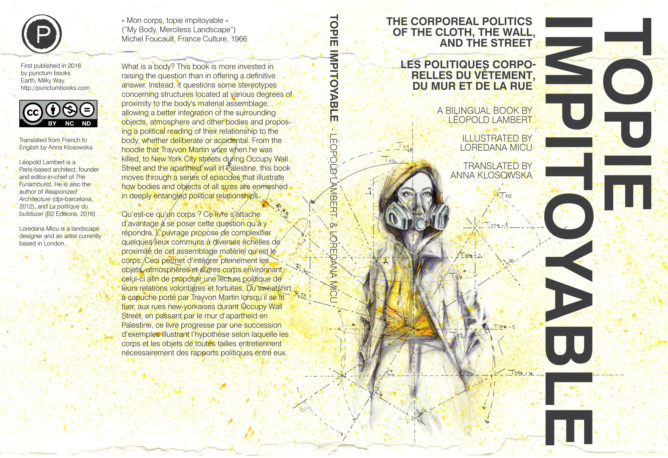 07| PRELUDE: Architecture as a Weapon
21| INTRODUCTION: What Is a Body?
47| DESIGN AND BODIES: An Intrinsic Violence
65| THE CLOTH: An Epidermic Fabric
99| THE WALL: The Line and its Thickness
127| THE STREET:  Occupation of Bodies
159| CONCLUSION: “All Men Are Sisters”
169| ACKNOWLEDGMENTS

Excerpt from the book:

PRELUDE: ARCHITECTURE AS A POLITICAL WEAPON ///

It always seems useful to situate a discourse in the wider context of one’s ongoing research. This new book begins where the previous one, Weaponized Architecture: The Impossibility of Innocence, ended. I wrote it in 2010 and my friends Baraona Pohl and César Reyes had the kindness to publish it in 2012. That book started with the hypothesis that architecture is inherently violent because of the way it dissects space and because of the resulting spatial organization of bodies. Architecture is a social discipline, and therefore this violence always ends up as an instrument of politics, whether it’s done consciously or not.

The volume touched upon a host of historical and contemporary examples: Haussmann’s transformation of Paris in the nineteenth century, prison architecture, American suburbs during the Cold War, gentrification of New York, barricades, tunnels, etc. A number of examples are mentioned again in the present volume. However, Weaponized Architecture was preoccupied with one particular situation: material realization of Israeli occupation of the West Bank and East Jerusalem. In the first place, my research was analytical, in the footsteps of the canonical work of Israeli architect Eyal Weizman, Hollow Land. I attempted to compile an inventory of the different means that organize the military and civilian Israeli occupation of the Palestinian territory by different means: architecture, infrastructure, territorial and legal. Second, my research had an “embodied” aspect thanks to an architectural project intended as part of a political manifesto on Palestinian resistance to the occupation. Built in “zone C” (63% of the West Bank since the Oslo accords of 1993), where Israeli army prohibits any Palestinian construction, it consists of a small agricultural platform connected to a shelter, to be used by the Bedouin population. That design uses architectural means to disobey the rules of the occupation. The project also anticipates the discovery of the building by the Israeli army, and the resulting attempted demolition. Spatial properties of the building prevent complete destruction, resulting in the creation of a ruin in the landscape of Salfit: a ruin whose political value for the Palestinian people is not negligible. Palestinian villages on Israeli territory after 1948, destroyed down to the last stone, were not able to tell the story of their past existence. Palestinian ruin, however, can do so through its architecture.

One important conclusion of Weaponized Architecture was the refusal to see architecture as a “solution.” The book insisted on the danger inherent in this notion that tends to take every means necessary for its accomplishment. For me, it is more interesting to define problems rather than to occupy a technocratic position that would attempt to solve them. Similarly, the present book is more interested in defining our ignorance, especially concerning the body, than establishing certitudes.

This book is entitled Topie Impitoyable (Merciless Landscape) in a homage to the opening sentence of Michel Foucault’s short radio conference, The Utopian Body (Le corps utopique), broadcast by France Culture station in 1966. Its alliterative symmetry is supposed to translate Foucault’s original phrase: “mon corps, TO-PI-e imPI-TOyable” (“my body, merciLeSs LandScape”). The body is, thus, necessarily spatial, which also means that it is necessarily material. As we shall see, this book often adopts axioms similar to this one, which reiterate the notion of occupation. I had a chance to reflect on occupation during Occupy Wall Street movement in which I participated in 2011 and 2012 in New York. The phrase “merciless landscape” means that the necessary spatiality of a given body implies that there is only one space for each body at a given time and that only that body can occupy that space. At the time you are reading this book, your body — that is, you — is situated in the place you’ve chosen, or that was chosen for you, excluding all the other places in the world; and only your body can be situated in this particular place. Conflicts that may emerge from that exclusivity will be one of the subjects of this book.

In order to truly begin this book, though, we must define some terms we use throughout. The first of them is matter. One of the postulates of this book is that there is nothing that is not matter. I am less interested in defining the term matter than in inviting the reader to think everything in terms of matter, including phenomena that we often consider immaterial: thought, life, time, etc. Each of them can be interpreted in terms of continuous movement of matter. For instance, the notion of time is nothing but a retrospective construct of the movement of matter.

Matter is indeed in movement, which entails encounters between material assemblages we call bodies. This allows us to define the term of violence that I will use frequently, and whose reception is often problematic. I understand violence in a strictly material dimension as well. This approach considers all encounters between two bodies whose result has an effect on their structural coherence — that is, on their ability to form a body. Violence is thus an episodic or continued relation of two bodies, that is, of two material assemblages. As we shall see, there is reciprocity in that violence, although that may not be evident, due to the degree of violence affecting each body. In other words, when I bump into the table corner — a frequent experience for the clumsy body that I am — my body is affected, but to some extent the table as well.

The last term I want to define is power. This book doesn’t only borrow the title from Foucault, but also the way Foucault elaborates an interpretation of power. For him, power is not something that bodies have, or something that exists in and of itself, but rather something that is excercised between bodies. There are, therefore, no bodies that are essentially colonizers and others, essentially colonized. Rather, in each instance, there are effects of relations between bodies. The conditions of these relations are nonetheless influenced by social structures and their normative production, as we shall see in the introduction.

Let us now draw a map of this book. I see it as a slow zooming out movement from the body and the successive intensive and material layers that compose bodies, to the objects that constitute the field of exploration and fascination of the present book. Each chapter can be read independently, allowing specific readings from specific vantage points. The audience is varied, and some arguments will be self-evident to many, but perhaps not the same ones for everyone. It seemed important to present them all here.

The introduction will bring closer to us the material assemblage we call the “body.” First, we will consider each body as an isolated and neuter whole and observe its physical properties. Second, we will imbue the body with movement in order to understand its potentialities. The notion of movement implies material encounter between bodies. This will allow us to imbue the body with political values, in particular in the way encounters between bodies produce normative processes. We will study in detail the ways bodies are systematically “trapped” in the mechanism of the norm that categorizes them in order to function. Bodies are assigned race, gender, definite sexual orientation, potential handicaps: categories that produce power relations determining the way bodies interact with each other.

This book wants to make a statement on design as discipline. If we consider the body in a certain way, we will better be able to analyze the way that objects, buildings and cities imagined by that discipline interact with the body. That will be the point of four chapters of the book. Each analyzes a bodily relation to design on a certain scale: clothing, wall and street. These three scales associated with the scale of the body itself should not be considered independent from one another. Rather, they are intensive layers whose limits cannot be clearly established. The categorization of the stages selected in the backwards travelling of this book is solely intended to help my argument. I begin with a question that, no matter how we answer it, is always inscribed in a normative hierarchy: what is a body?