Dear readers, here is the introduction written for the book The Funambulist by its Readers: Political Geographies from Chicago and Elsewhere, a book commissioned by the curators of the Chicago Architecture Biennial 2019, which collects 20 articles we published in our 22 first issues, as well as five new texts by Chicago-based activists. You may find more information about the book (and download it for free) and how to order it by following this link. 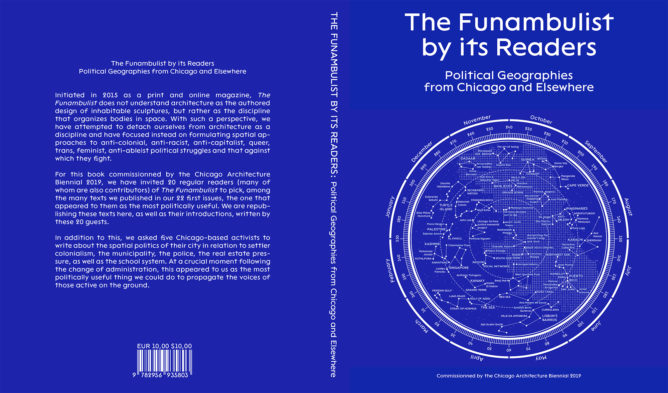 Initiated in 2010 as an online editorial platform, and then in 2015 as a bimestrial print and online magazine, The Funambulist parts from a narrow understanding of architecture as the authored design of inhabitable sculptures to favor its broader definition as the discipline that organizes bodies in space. When investigated through this definition, architecture can be perceived as one of the key components as to how political forces are able to materialize into space and enforce themselves onto bodies. Although true anywhere else in the world (as this volume illustrates), the united states, where the Chicago Architecture Biennial occurs, offers a particularly poignant example of the kind. The infrastructure of the settler colony includes the boats that forcefully displaced 12 million kidnapped African bodies, the plantations that then extracted the workforce of those same enslaved bodies, as well as the architecture of the border and carceral state — from the state and federal prisons to the concentration camps detaining yesterday Japanese diaspora and today Indigenous migrants coming from the south of Turtle Island. These examples overlap with the history of violence that founded this nation state and through which it continues to operate. To this, one could answer that architecture has also been materializing decolonial and anti-racist political forces; this is true to a certain extent, but we have to observe how easy it is for architecture to enforce the settler-colonial and carceral agenda before we can even start doing so. After all, hasn’t the incumbent president of the settler colony run an entire electoral campaign on the very materialization of a colonial border line into the most common architectural typology: a wall?

With such a perspective, we have attempted to detach ourselves from architecture as a discipline and have focused instead on direct or indirect spatial approaches to anti-colonial, anti-racist, anti-capitalist, queer, trans, feminist, anti-ableist political struggles, and that against what they are fighting. Palestine, Kashmir, Kenya, Kanaky, Pakistan, Puerto Rico, Portugal, Guinea, Japan, Singapore, France, Turtle Island, and the waters of the Suez Canal, the Gulf of Aden, and the Persian Gulf… these are the geographies mobilized in this volume, but they are among the many we have been discussing in the first 25 issues (and counting) of the magazine. This list does not provide merely a context to the struggles, but rather, considers the spaces that influence them and that are, in turn, informed by them. This is true at multiple scales: although it is common to examine the ableist object, the gendered house, the segregated neighborhood, the capitalist city, or the colonial infrastructure as having processes of violence incorporated within their very structures, these multi-scalar built environments are nevertheless interchangeable. Analyzing the structures of violence is crucial,but not enough however; this is why our six issues of 2019 are dedicated to promoting several dimensions (spaces, publications, architectures, futurisms, self-defense, and pedagogy) of political struggles from Aotearoa to Chiapas, from Johannesburg to Gaza, etc.

We have decided that the key notion emerging from this collection of texts should be political usefulness. Much more than convincing a liberal audience of the urgency of the political struggles showcased throughout these pages, our number one ambition consists in producing something useful, if not operative, for those who are fighting “on the ground.” This is why we tested this notion of usefulness by inviting 20 regular readers (many of whom are also contributors) of The Funambulist to pick one text in our first 22 issues that appears to them as being particularly politically useful, and to explain it for this text, which is then to be republished in this present volume. The definition of “useful” was left open to the discretion of these twenty guests. Some understood it in its most operative manner (how to organize, what strategies to adopt, how to approach time or space differently), while others interpreted it through more literary or methodological readings.

All the texts relate to the statement drafted by the curators of the Chicago Architecture Biennial (Yesomi Umolu, Sepake Agiama, and Paulo Tavares) that commissioned us this volume. The Indigenous insurrections, from Turtle Island (Nick Estes, Deborah Cowen) to Kanaky (Anthony Tutugoro), address the notion of sovereignty that “No Land Beyond” proposes to question. Both the memories of the African Party for the Independence of Guinea and Cape Verde headquarters in Conakry (Sónia Vaz Borges), and those of the Palestinian infrastructure of intimacy that used to incarnate the family home later destroyed by the Israeli army (Sabrien Amrov) relate directly to the “Appearances and Erasures” chapter. As for the “Rights and Reclamation” section, it can be found in the anti-racist movements of the French and Portuguese suburbs (respectively Hacène Belmessous, and Ana Naomi de Sousa & António Brito Guterres). Finally, the decolonization of time (Rasheedah Phillips), the radically anti-normative design of Arakawa and Madeline Gins (Momoyo Homma), and the “Decolonial Mapping Toolkit” (Patrick Jaojoco) embody excellent examples of what the Biennial curators intended for the chapter “Common Ground.”

However, none of this would make any sense if the attempt to produce political usefulness here would not be profitable to activists in Chicago where this Biennial is set. What could appear as common sense requires instead some deliberateness, as the effects of the Biennial itself could not possibly be neutral to the city — something that the curators themselves have well understood, but these effects are much greater than the event under their control. This is even more true when one of the main initiators of the Biennial is former mayor Rahm Emanuel himself. During his eight years of tenure, his administration has shut down 49 public schools, encouraged the gentrification of neighborhoods inhabited predominantly by the Black and Brown working class, and considerably reinforced a police force that practices what the U.S. Department of Justice itself has called a “pattern and practice of unconstitutional abuses, including the use of excessive force, especially against people of color” (Mother Jones, 2017). In 2015, massive protests demanded Emanuel’s resignation as investigations established that a video of Black teenager Laquan McDonald being shot 16 times by a white police officer on October 20, 2014 was deliberately hidden from the public by the mayor’s office, while Emanuel was running for reelection. Admittedly, Emanuel did not transform the Chicago Police Department (CPD) into the institutional enforcement of structural racism it currently is. Using the most extreme instance of its brutal recent history, between 1972 and 1991, the CPD has tortured over a hundred Black and Latinx people in their West Chicago Homan Square facility, as The Guardian revealed in 2015. However, he brought his contribution to this history of racist harm; most recently in projecting the creation of a $95 million police academy in the Black neighborhood of West Garfield Park, not far from Homan Square, which continues to be used by the CPD despite the atrocities committed in it.

In these conditions, our participation to this Biennial was conditioned on making this critique heard through the voices of five Chicago-based activists, as well as dedicating a third of our production budget to their honoraria — for his help in this process, I would like to thank another Chicago activist, Ladipo Famodu. These five activists are Patricia Nguyen who, along with her collaborator John Lee, has been selected for the design of the Chicago Torture Justice Memorial Project; Benji Hart, one of the key figures of the #NoCopAcademy campaign; Jesse Mumm, whose academic and activist work takes site in Humboldt Park against gentrification; Maira Khwaja, whose job as an educator puts her at the forefront of the daily problems faced by her students, between racist policing and gun violence; and finally Anjulie Rao, whose bridges between the world of architecture and that of political activism make her place in the pages of this volume particularly relevant. A few months after incumbent mayor Lori Lightfoot took office, the usefulness of these contributions is not so much to be found in an assessment of the previous administration’s policies, and more in the urgency to fundamentally sever them, and hold the municipality accountable for the violence it continues to produce through its police and neo-liberal policies. If we might be of any use to this end, then our participation to an event like the Biennial would have been worth it. ■