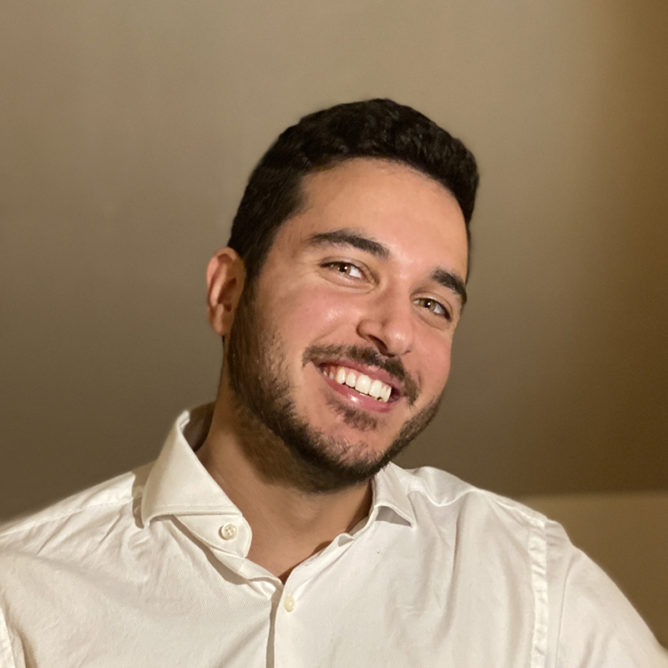 Mohamad Nahleh is a SMArchS Architectural Design candidate and Teaching Development Fellow at the Massachusetts Institute of Technology. He holds a Bachelor of Architecture from the American University of Beirut and was awarded “World’s Best Graduation Project” from Archiprix International for his undergraduate thesis, 185 Encounters in Karm El-Zeitoun. Most recently, he is the recipient of MIT Architecture’s NuVu prize for his current thesis research on the politics of darkness and the night. His latest papers, “The Litani Basin in Lebanon and the Conversion of Politics Into Cancer” and “Reading Beirut through its Power-bearing Artifacts” are both slated for publication in 2021 by The Association of Collegiate Schools of Architecture for the 27th World Congress of Architecture UIA. Outside of academia, he continues to design professionally with Taha Barazy through their co-founded practice. Their upcoming projects include House of the Forgotten Arches and A Tower for the Countryside. He contributed to The Funambulist 23 (May-June 2019) Insurgent Architectures.

For the Funambulist’s 23rd issue, Insurgent Architectures, I wrote about my Bachelor’s thesis at the American University of Beirut a few months after its completion. The project, a series of tactical micro-interventions, culminated in the design of a single, vibrant blue staircase; what was to be an inclusive offering of public space for Karm El-Zeitoun, one of Beirut’s oldest informal neighborhoods. Upon installation in June 2018, a series of steps and viewing decks offered glimpses of life beyond the neighborhood’s massive flyover and were, at first, animated by the activity and leisure of an exceptionally diverse community of residents. But the novelty of these solidarities faded shortly after the publication of Encounters in Karm El-Zeitoun in Beirut and the staircase ultimately surrendered to the blatant racism, sectarianism, and xenophobia forced upon it by the neighboring residents. Damaged and overtaken by loose wiring and power lines, it became a steel-stepped conductor of live electricity. Abandoned by those it claimed to serve, it perpetuated and exaggerated the conditions it was supposed to alleviate. The story it wanted to tell was completely rewritten. Its structure was locked, its function altered, and the history of its own potted olive tree was weaponized against it. A hazard to everyone around it, not even the Beirut port blast in August 2020 would be enough to reconcile the hostilities now embodied by the structure. Unwanted and unused, the structure stands today among a neighborhood in ruins. A collector of political corruption manifested physically, the staircase glitters with shards of shattered glass, a piece from every home blasted apart in an indiscriminate storm of destruction.

The story of the staircase traces the evolving tension between narratives intended by the architect (the alluring story of a ‘social’ project seductive enough to be named one of the world’s best graduation projects at the time) and the narratives of those living around the staircase itself. It is this tension, and the double life of the staircase — online and in international exhibitions and conferences, and offline in Karm El-Zeitoun — that demanded the production of On a Staircase in Beirut, an antithesis. On a Staircase in Beirut (2020) is an illustrated nonfiction novella that traces the capital’s layered urbanity through stories of the ordinary artifacts that populate one of its oldest informal settlements. While political ambitions are embedded into urban design and architecture through the commission and planning of capitals, cities, monuments, and buildings that convert the built environment into a spectacle of authority, they can also be understood at this scale, as being encoded into seemingly mundane objects by dwellers navigating the repercussions of the power constructs around them. Building on the failure of the blue staircase, the novella triggers a representation of the city where covert negotiations of power and authority come to constitute the ordinary, where dwellers’ relationships with the spaces they inhabit define the city within which they choose(or are forced) to exist. Following a nine-month return to Karm El-Zeitoun, it reveals how urban form, even at this scale, endures a complex history of displacement, migration, war, genocide, and obscure local and regional politics. But rather than offer a diagnostic of existing problems, the stories in On a Staircase in Beirut foreground the opportunities that politics provide for design, and vice versa, through a reimagined practice of architecture. It is within this framework, through the dismantling of narratives, through the nuances rather than the clear dichotomies, the dead metaphors that dictate our lives, that the practice I recently co-founded hopes to read the city, and perhaps rewrite some of its stories. 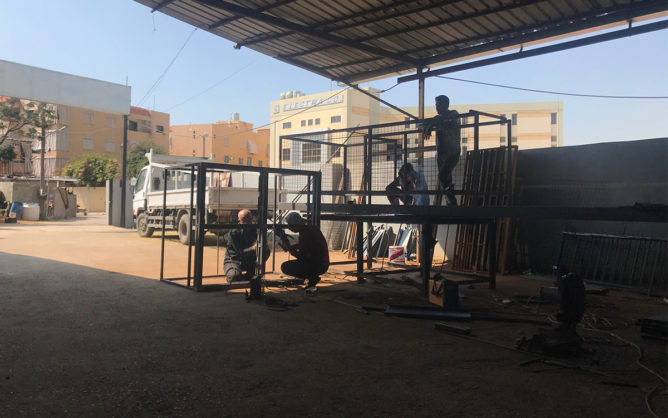 The first few components are welded together at a workshop off-site. 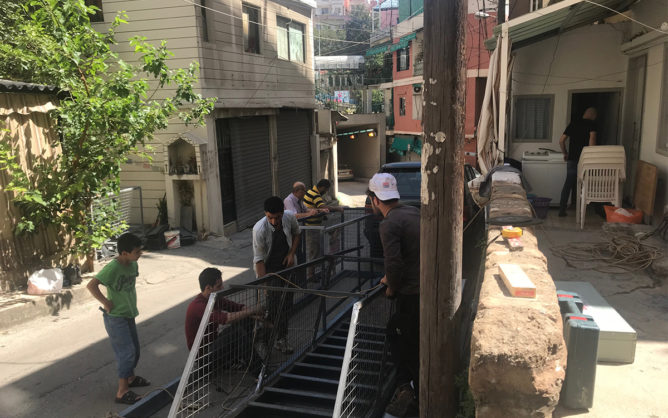 Locals of Karm El-Zeitoun help assemble pieces of the staircase upon their arrival. 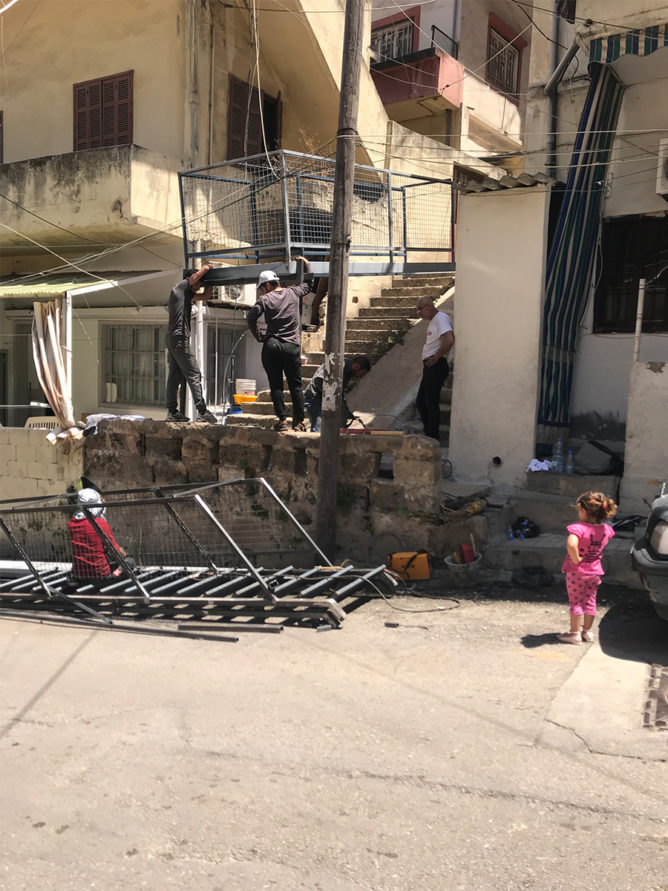 A curious spectator watches as the staircase is lifted into position. 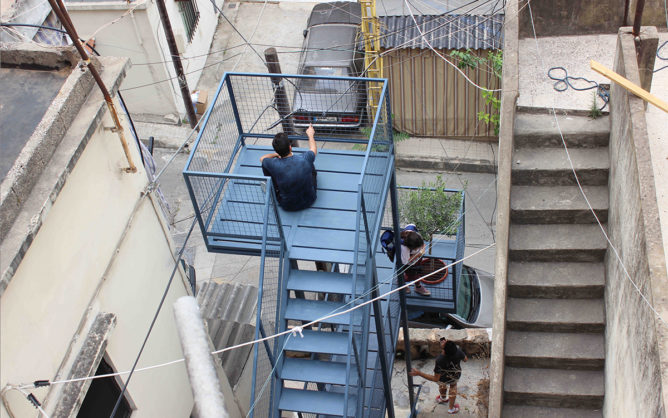 The staircase upon completion of the project. 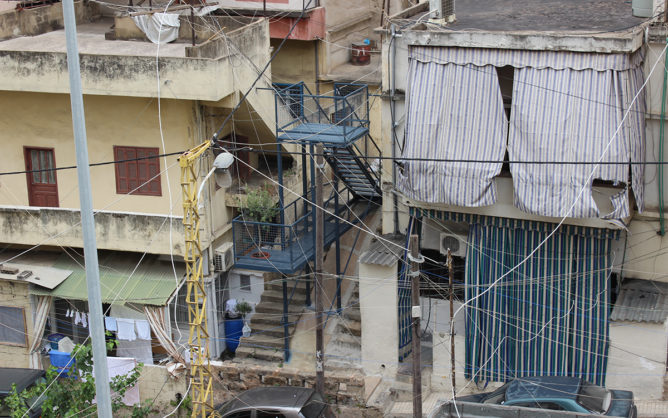 Visitors are barred from entry the first day the staircase is locked. 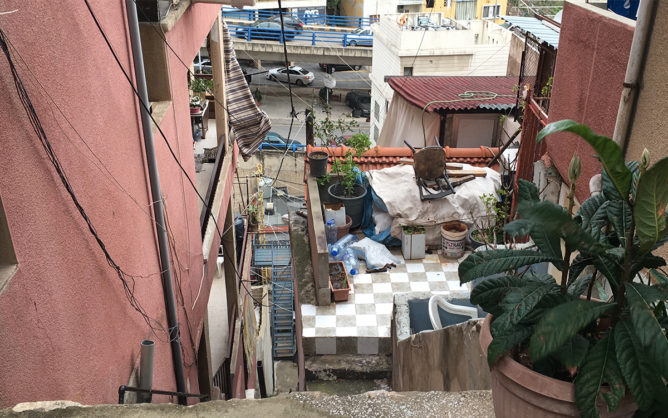 Empty and abandoned, the staircase is now more infrastructure than space.