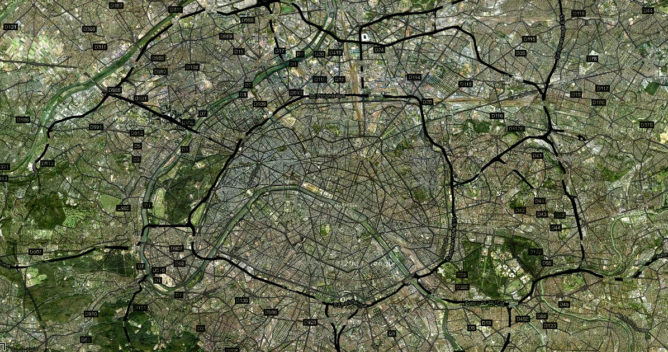 This article is the first one of a trio which will investigate the architectural elements that makes Paris, a contemporary fortress. The Boulevard Périphérique (highway ring) around it, marks its geographical limit and embodies the latter in a solid barrier of low porosity. Of course, the city walls are not as evidently militarized than its 19th century ancestor, the Thiers fortifications built in 1844 on the same route than the current Périphérique and carrying the name of the character who slaughtered the Paris Commune few decades later. However, the will of ‘defending’ Paris’ integrity against the exterior is still strong and expressed in a (barely) more subtle way. At the exception of the Western suburbs -where the highest social classes live- the city is very difficult to access from its surroundings thus materializing the policies of social exclusion at work in Paris.

The physical border that separates the center of the city from its suburbs is embodied not only by the Périphérique but also, on its side, by various zones differing from the simple state of no-man’s land to various zones of office buildings, malls or other non-residential program that scarify the threshold between inside and outside. In order to illustrate this buffer zone that is well-known of Parisians -at least those who have to experience it on a daily basis- I selected sixteen views (see below) from google street in which you can see how the entrance in Paris materializes. I tried to keep as a visual continuity, the small sign announcing Paris like in every towns in France. By doing so, I wanted to insist on the graphic contrast between the function of this same sign (its welcoming status) and its actual environment which constitutes a gate -and that is indeed their official name- to the Fortress Paris.