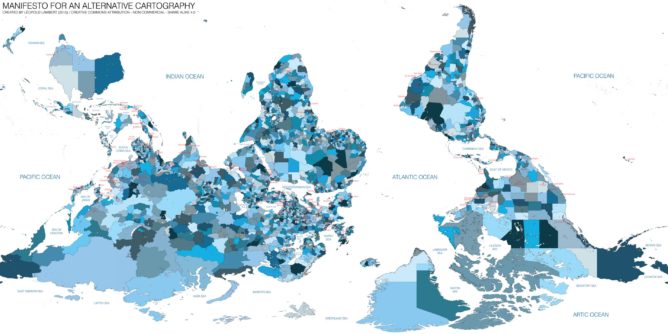 Léopold Lambert – Paris on May 29, 2015
If you enjoy articles of the blog, have a look at The Funambulist Magazine!

I made this map in complement of last week’s article that introduced a few hypotheses about new ways of envisioning governance. It represents the world, no longer by its national borders but, rather through its regional ones. Although this article insisted on the importance of the scale of governance to resist national essential identities, the choice for administrative regions is less an emphasis on this particular scale — after all, regional identities can be quite hermetic too — than an attempt to blur our cartographic imaginary constructed, day after day, by the same conventions (North should be up, countries’ borders should be shown, oceans should be blue, etc.). This map does not try to replace this conventions by others, but simply to offer an alternative among an infinity of potential others to them.

As argued in the previous article, cities are also a fundamental scale of governance and are represented as such on this map. The 100 most populated cities of the world that gather 884 million inhabitants are thus shown on the map. This remains however a relatively traditional way to represent the world, and since the hypothesis of a new governance implied that bodies can fully take part of the governance of the territory on which they are currently situated, I added to them the 100 most visited cities in the world (such as Macau, Antalya, or Mecca). The aimed imaginary that this map can create is thus insisting on where the bodies are, rather than where they “belong.” Of course, the type of migration is not the same in cities like Las Vegas (tourism), Mecca (pilgrimage) or Dubai (employment), and this map lacks this degree of refinement to describe the specificity of each city’s reason for such a concentration of bodies. Nevertheless, the ‘original’ reason that motivated hundreds of thousands of bodies to be temporary present in a city is never the exclusive reason for it. Although Pukhet, Djerba, Agra, and Venice can be reasonably considered as touristic destinations and, as such, a migration characterized by the economic wealth of its bodies; yet, this specific population of bodies in this cities are consequently complemented with numerous others, engaged in the infrastructural work necessitated by such an afflux.

The map is a work-in-progress and I am making the source-PDF file available to download here.