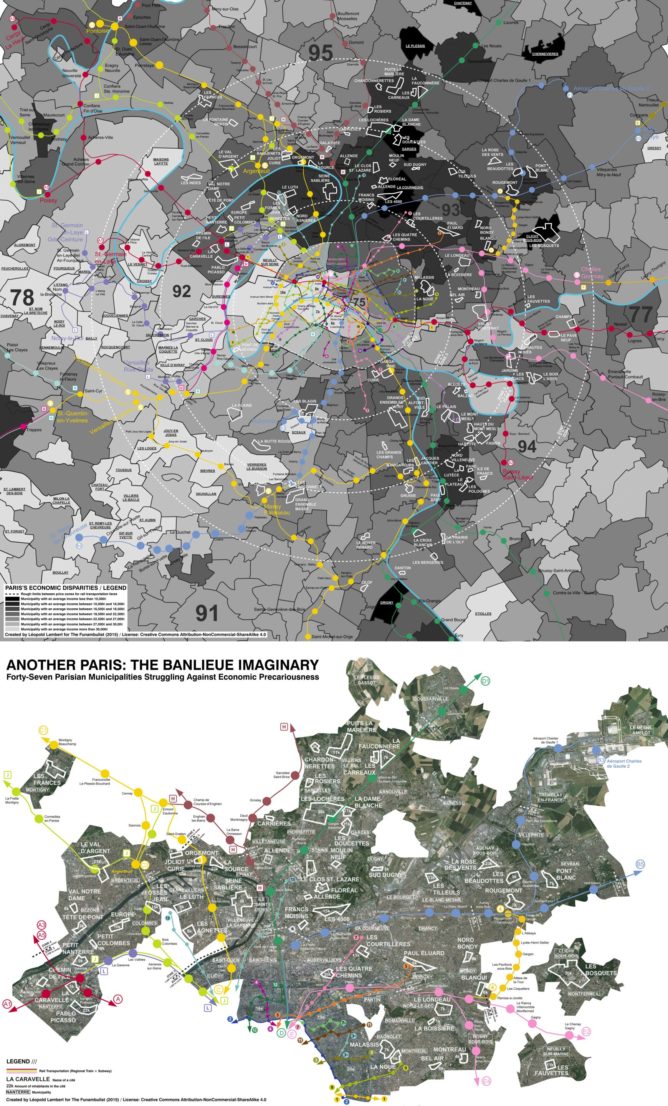 Maps created for the purpose of this article / Download them here in high resolution (11 MB)
(license: Creative Commons Attribution-NonCommerical-ShareAlike 4.0)

Léopold Lambert – Paris on January 16, 2015
If you enjoy articles of the blog, have a look at The Funambulist Magazine!

In the wake of the recent attacks against journalists and people shopping at a kosher supermarket in Paris, a few people have told me that they expected me to write something here to share my opinion. Given that so many people (in France particularly) have written their own, almost always with great certainty — it is surprising to see so much certainty in a situation symptomatic of so many problems — I decline to give my own account here, and prefer to address things through a less direct and more structural approach. In order to do so, I drew two new maps in the continuity of the ones presented in the 2014 article “The Banlieue Archipelago: Cartographic Inventory of the Cités Around Paris.” The two original maps intended to index 95 cités (large public housing complexes in the suburbs) where 12% of the considered area’s population live in what we could call, a deny of “the right to the city.” The goal of the two new maps consists simultaneously in a complexification of the exclusionary logic at work, as well as the construction of another imaginary in the manner we tend to see Paris. Because of this necessary change of imaginary, I will consistently call “Paris” what is normally considered as the “Parisian region” and specify “the Paris municipality” (what we usually simply call “Paris) when needed.

In the past (see the previous article for instance), I have been repeatedly writing that the “boulevard périphérique” (highway ring) that surrounds Paris constitutes the contemporary equivalent of the city’s fortress walls that used to be situated at the same place. The particularity of Paris is that the Parisian municipality only exists within these walls (see past article for photos), which has for consequences to substantially increase the centralized characteristics of the city in a country already far too centralized. The map introducing a visualization of the wealth disparity in Paris by municipalities helps us to complexities the useful, yet too simplistic vision of Fortress Paris: the map shows clearly that the wealthy municipalities of the West (the wealthiest being named on the map) do not stop at the périphérique, buried for most of it in this area but, instead, have good connection to the wealthiest districts of the Paris municipality (6th, 7th, 8th, and 16th arrondissement). On the contrary, the périphérique marks a strong limit between the poorest municipalities of the North (again, the most extreme ones are named on the map) and the Paris municipality. We can note however that the three poorest districts of the municipality (18th, 19th, and 20th arrondissements), despite their growing gentrification, extend this territory of precariousness. We might therefore want to associate them to a vision of the precarious Paris.

The second map thus consolidates this extension by presenting a map of Paris that embraces its own subjectivity. This subjectivity is not any stronger than any other maps, most of which heavily insisting on representing Paris in a centralized scheme; however, it attempts to construct another imaginary of Paris in a more deliberate manner. This map includes 44 municipalities and the three poorest districts of the Paris municipality (18th, 19th, and 20th arrondissements) as one piece of territory no longer responding to the idea of centralization. 50 out of the 95 cités showed on the previous maps are situated within this territory and the map incorporates their amount of inhabitants for each of them. The map includes all axes of rail transportation but insists on the prohibitive cost of tickets to reach the center of Paris depending on the geographical distance of any given station. One will also easily notice the absence of these axes in large populated areas like in Clichy-sous-Bois/Montfermeil (57,000 inhabitants) or in Gonesse (25,000 inhabitants).

Constructing a new imaginary does not change much the reality it describes, and the exclusionary structures remain inexorably operative in their violent physicality. Nevertheless, these logic are so anchored within the way we perceive (and therefore perpetuate) the city of Paris and its excluded populations, denigrated by the almost entirety of the political elite, that it seems that the first step to undertake is to act on all elements that would claim to legitimate them. The problem is immensely urgent and millions of people — that includes similar logic at work in other cities — suffer from it on a daily basis (urban exclusion and structural racism often work together through it), many things can be done at a local level to reduce the spatial violence at work; however, a deep enterprise towards an equal “right to the city” necessitates a serious introspection of French history of violence, which includes both the colonial era and the country’s consistent embrace of capitalism, a social re-organisation of the “vivre ensemble” (“living together” used as a noun), and a territorial decentralization of the city, both in its transportation means and its distribution/facilitation of economic/cultural activities. Architects and urban designers, for this matter, have a large responsibility and they will only live up to it in the condition that they use what we could call their ‘spatial expertise’ to politically engage the “right to the city,” rather than thinking in terms of “solving” (or worse, “healing”) a situation that they fully contributed to create.