The (first) launch of The Funambulist Magazine’s second issue dedicated to Suburban Geographies will happen on November 2 (7 PM), at the Westminster Law & Theory Lab directed by friend Andreas Philippopoulos-Mihalopoulos in London. In addition of this specific issue, I will also present the first (Militarized Cities) and third (Clothing Politics) ones, and we will be very lucky to have Professor Reina Lewis also presenting her text for the third issue.

Please RSVP by following this link.

Complete text of the invitation: 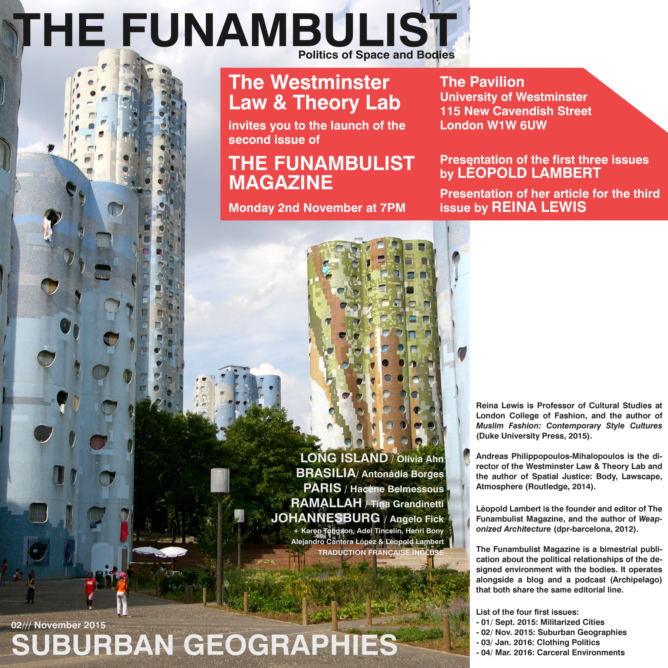 The Westminster Law & Theory Lab kindly invites you to the London Launch of The Funambulist Magazine’s Second Issue: Suburban Geographies on Monday, 2nd of November, at 7pm at The Pavilion, University of Westminster, 115 New Cavendish St, W1W 6UW

Andreas Philippopoulos-Mihalopoulos is the Director of the Westminster Law and Theory Lab and the author of Spatial Justice: Body, Lawscape, Atmosphere (Routeledge, 2014)

Leopold Lambert is the founder and editor of The Funambulist Magazine and the author of Weaponized Architecture: The Impossibility of Innocence (dpr-barcelona, 2012)

The Funambulist Magazine is a bimestrial publication about the political relationships of the designed environment with the bodies. It operates alongside a blog and a podcast (Archipelago) that both share the same editorial line.

The event is free but places are strictly limited.