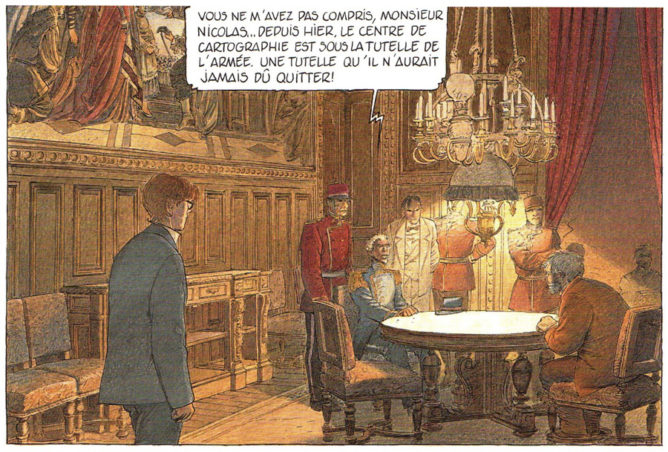 “You did not understand me Monsieur Nicolas…since yesterday the cartographic center is under the army’s tutelage, something that should have never stopped in the past.” All illustrations from François Schuiten & Benoit Peeters, La frontière invisible, Paris: Casteman, 2004.

Léopold Lambert – Paris on January 22, 2015
If you enjoy articles of the blog, have a look at The Funambulist Magazine!

The graphic novel The Invisible Frontier by François Schuiten and Benoit Peeters (2004) introduces a narrative, particularly useful in order to understand the militaristic essence of cartography. The main character, De Cremer, is a young cartographer working in a gigantic dome hosting a large-scale model of the country, Sodrovnia. The idea of a world contained within a dome reminds the one depicted in Peter Weir’s Truman Show (1998) and its suggestion of each world’s self-sufficiency — we never really perceived the limits of the dome from inside throughout the book to one exception that will be described below. More importantly however, the cartographic function of this reduced world seems to envision Lewis Carroll‘s concept of a “mile to a mile” map as he describes in Sylvie and Bruno Concluded (1893):

“That’s another thing we’ve learned from your Nation,” said Mein Herr, “map-making. But we’ve carried it much further than you. What do you consider the largest map that would be really useful?”
“About six inches to the mile.”
“Only six inches!” exclaimed Mein Herr. “We very soon got to six yard to the mile. Then we tried a hundred yards to the mile. And then came the grandest idea of all! We actually made a map of the country, on the scale of a mile to the mile!”
“Have you used it much?” I enquired.
“It has never been spread out, yet,” said Mein Herr: “the farmers objected: they said it would cover the whole country and shut out the sunlight! So we now use the country itselve, as its own map, and I assure you it does nearly as well.”

Carroll’s idea was then declined by Jorge Luis Borges in his one-paragraph short story “On Exactitude in Science” (1946):

. . . In that Empire, the Art of Cartography attained such Perfection that the map of a single Province occupied the entirety of a City, and the map of the Empire, the entirety of a Province. In time, those Unconscionable Maps no longer satisfied, and the Cartographers Guilds struck a Map of the Empire whose size was that of the Empire, and which coincided point for point with it. The following Generations, who were not so fond of the Study of Cartography as their Forebears had been, saw that that vast Map was Useless, and not without some Pitilessness was it, that they delivered it up to the Inclemencies of Sun and Winters. In the Deserts of the West, still today, there are Tattered Ruins of that Map, inhabited by Animals and Beggars; in all the Land there is no other Relic of the Disciplines of Geography. Suarez Miranda,Viajes de varones prudentes, Libro IV, Cap. XLV, Lerida, 1658.

Although it would be tempting to think of these scale-1 as indistinguishable from the land they represent, we should refrain from this idea and insist on the necessary subjectivity of the document that is the map. As Fabrice Leroy exposes in “The Representation of Politics and the Politics of Representation in Schuiten and Peeters’s La Frontière Invisible,” (History and Politics in French-Language Comics, Jackson : The University of Mississippi Press, 2008, 117-136), two cartographic paradigms oppose each other throughout Schuiten and Peeter’s novel. The first one is carried by an old man, Monsieur Paul, who is committed to make maps that reflects on the historic conditions of a place, both at an individual empirical level and at a collective (inter)national one. This interpretation of the map is particularly illustrated in the first part of the story with the delicate care of each body interacting empirically with the model/terrain. The second one is also embodied by a character, Ismail Djunov, who undertook to automatize the process of map-making through monumental machines aiming at an objective cartography.

With the military takeover of the cartographic center later in the novel, it seems obvious that this latter paradigm will win the battle against the former. The turning point of the story intervenes with the visit of the Marshall Radisic, dictator of Sodrovnia, and military visionary with imperial ambitions. He is received on an elevated platform that allows the overview of the entirety of the dome and its map. For the first time in the novel, we distinguish the map as no longer a practicable terrain on which the characters are able to walk, even if the scale of their body and the scale of the objects seem dissonant to the eye that insists on the representative role of the latter (trees are only a few inches high, mountains, a few dozens of feet, etc.). In the presence of the Marshall, the map reveal its full militaristic potential: it is seen from above in a dominant and controlling interpretation of a territory, like the architect on his/her plan and, we might argue, the legislator and his/her law (see previous essay). This dominant vision ‘from above’ is particularly exemplary of our era’s drone warfare and its quest for maximized vision from the clear sky — the blue sky is now synonym of fear for the populations suffering from regular attacks of US and Israeli armies’ drones. Derek Gregory (listen to our Archipelago conversation) regularly offers us a precise account about this quest for military vision on his blog Geographical Imaginations. Caren Kaplan‘s work is also instrumental to understand this “mile to a mile” cartography allowed through air military vision, but she insists that such technique was already at work much before the coming of the drone, through the First World War observation balloons and the beginning of air warfare.

Once the map has unfolded its militaristic essence, there is a direct physical correspondence between its surface and that it represents. In other words, the map becomes the equivalent of the Napoleonian models of the battlefield on which the military officer describes his strategy, actualized a few moments later by his soldiers on the actual field. Schuiten and Peeters’s novel depicts this correspondence when we see De Cremer steps over the newly added border wall in the model, blaming the cartographic machines for cutting a city into two parts — the novel being published in 2004, it seems hard not to think of the splitting of East Jerusalem by the Israeli so-called “separation barrier” — and, later in the narrative, experiencing the violence of the same border now materialized at the scale of national territory. Although the authors seem to insist on the error-became-truth of the cartographic machines, thus exercising violence randomly, we might want to suggest that the situation is as much problematic when the military machine commits error as when it does not.

However, the most intense manifestation of violence in the novel intervenes elsewhere. Despite the fact that the reader tends to experience the narrative through the character of De Cremer, he is the one who will allow this violence to unfold through, again, the cartographic surface. Throughout the story, he becomes more and more absorbed by the body of a young woman, Shkodra, and soon reaches fetishism through his fascination for her birthmark on the lower part of her back that he interprets as a historical map of Sodrovnia. At the end of narrative, when arrested in their escape by the Marshall and the army, he forcefully undresses her and show the mark to the military claiming that this map is a memory of the national territory. Sexual violence on body surfaces and military violence on territorial surfaces coincide perfectly here through this common link of the cartographic necessary subjectivity.

The words of Yves Lacoste, geographer and founder of the Hérodote journal,  can help us conclude this article: “la géographie, ça sert surtout à faire la guerre” (geography is mostly useful for war). The use of the term “surtout” (mostly) is fundamental here. At first glance, such a word could appear as making the statement less precise and as thus diminishing its strength; however, a deeper reading allows us to think that this term coins the militaristic essence of geography (and thus of cartography), without necessary limiting its role to it. This helps us thinking of a practice of cartography that would not be liberated from its violence, but rather, in understanding the latter in order to inform our own political manifestos.

TRANSLATION OF THE IMAGES ABOVE ///

Image 2: – De Cremer: Uh…are you sure that it’s strongly attached?
– Monsieur Paul: Don’t tell me that you are afraid of heights…

– De Cremer: No, no, but…
– Monsieur Paul: For someone who loves maps like you, you must be enjoying this

– De Cremer: Uh yes, this is…
– Monsieur Paul: The geodrafters’ observations, the center’s various services’ analyses, everything ends up finding its place here…

Image 4: – Radio: In a few moments we will propose a sound broadcast of a speech given by Marshall Radisic, Supreme Chief of our beloved Great Sodrovnia

– Radio: “My dear fellows, the time of humiliations for our country is over! Like every human beings, nations have needs..”

– Radio: “Our people’s genius lies in the extension, or rather the recovery, of the territory to which its glorious history give the legitimate right.”

– Radio: “It belongs to our era to make visible the true frontier of our Great Sodrovnia. It belongs to me, with your infallible support to make it soon tangible.”

– De Cremer: But, what are you doing? You are in the middle of Mylos here, not in Sodrovno-Voldachy!

– Employees: We follow the data, Monsieur De Cremer, I assure you. Here, the maps are here!

– De Cremer: I don’t need to look at a map to know where is Mylos!…and anyway, this wall does not look like anything…you are reproducing all the errors there are on this paper! I am not even sure that you work at the right scale!

– Employees: We are doing as we’ve been told, Monsieur, we’ve been asked to go fast.
– De Cremer: It is not a reason to do nonsense!

– De Cremer: Look at this part of the city, why is it on the other side?
– Employees: We don’t know…

Image 5: – Ismail Djunov: I have the full trust of the Marshall, don’t worry! And believe me, my friend, there are people here that are much more harming his projects…
– De Cremer: What are you talking about? What do you insinuate?

– De Cremer: How could they go so fast?

– De Cremer: I understand even less where we are…

– De Cremer: It’s funny, this village is named the same way than you!
– Shkodra: It is not funny at all, that’s where I come from…

– De Cremer: Did you have family here?
– Shkodra: Stop talking! I don’t have anyone here, or anywhere else for that matter. I prefer to forget about all this.

Image 6: – De Cremer: The light is not perfect. But, you see, the shape of this mark…it is the same than the former Sodrovno-Voldachy…the trace looks exactly like the border.

– Shkodra: Stop it! Don’t listen to him Sir…I am just the first girl he slept with…he is telling himself stories.

– Marhsall Radisic: You are crazy my boy… how do you want this tattoo to be of any interest?

– Shkodra: Bastard!
– De Cremer: Uh, it is not a tattoo, this mark is inscribed in her skin…her body is like a memory of our territory.

– De Cremer: Her name is Shkodra actually, like the city…
– Shkodra: You’ll pay for this!

– De Cremer: If we could study things more closely, other secrets are likely to be revealed…