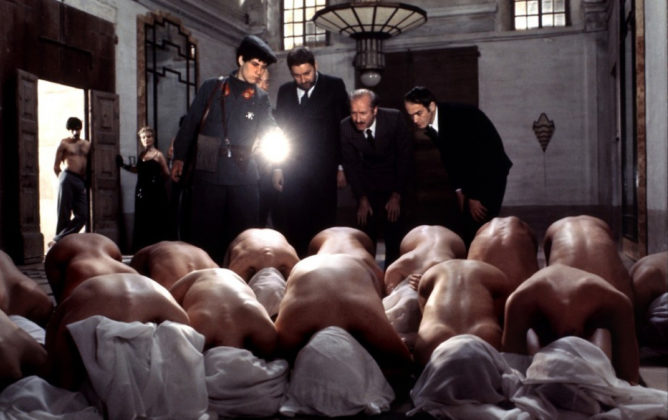 Image extracted from Pier Paolo Pasolini’s Salò, or the 120 Days of Sodom (1975)
The Abu Ghraib photographs are at the end of this article.
Warning: they are highly disturbing and potentially traumatizing.

While driving on the roads of the North American West Coast to continue my Archipelago journey, I had the opportunity to re-listen to the five hours of podcast that Les Nouveaux Chemins de la Connaissance (French radio program) had dedicated to the Marquis de Sade in 2011. Despite the high quality of this program and the great interest I had to follow it, I have to confess that the reading that was being made through it of Sade’s literature appears to me as missing a tremendously important approach to his work for which I would like to argue here. In order to do so, I would like to provocatively expurgate our reading of Sade from sexuality. Of course, by that I do not mean that we should withdraw the descriptions of sexual acts that populate his writings; there would not be much left. What I mean is that, for the sake of this text, we should not follow the example of many commentators who described the taste that Sade had for the scandal and transgression against authority and in particular a religious one — taste for which he spent 25 years of his life in prison — in other words, not to look at sexuality within its rules and norms, but rather, to consider sexuality as a set of relationships between the bodies.

Because of the extreme radicality of the sexual acts that Sade describes in his attempt to shock his readers, we tend to consider at the same level every sexual relations. They are however not the same in Philosophy in the Bedroom (1795) where they constitute an apprenticeship accepted by the student Eugénie or in Justine, or the Misfortunes of Virtue (1787) where the main character is consistently abused, exploited and raped all along the plot. Desexualizing Sade therefore consists in keeping our epidermic reactions to the examples where a body exercises an absolute power over another like it is often the case in Sade’s narratives. The paramount of such exercise is described inexhaustibly in The 120 Days of Sodom (1785) that was adapted by Pier Paolo Pasolini in Salò, or the 120 Days of Sodom (1975).

The 120 Days of Sodom dramatized the kidnapping of 42 youngsters by four aristocrats — four fascists in Pasolini’s version — in a German castle where the former are subjected to the most horrifying forms of sexual and physical torture by the latter. Three decades after the holocaust, Pasolini’s film adds a particularly unbearable historical dimension to the plot. What the Italian filmmaker however illustrates is that we need Sade to think of the extremity of a power applied on a given body. In the 1950s, many intellectuals debated about whether Sade’s work had influenced in a way or another the Nazi deployment of systematic violence. In “Must we burn Sade?” (1951) Simone de Beauvoir answers no to the question that entitles her essay. Questioning the responsibility of art in the construction of atrocious imaginaries constitutes an important examination; yet, reflecting on the questions that this same work create seems even more important. Sade allows such reflection.

The visual similitude between Pasolini’s fictitious depiction of Salò and the photographs of the prison of Abu Ghraib in 2003-2004 are highly disturbing. In both cases, we can see naked bodies used as assemblage materials, prisoners hold on leashes, oppressors’ bodies touching and abusing oppressed ones: every action is ritualized in a religious manner where the transcendence corresponds exactly to the absolute power of a body over another. Tortured prisoners are being stripped — I used this verb purposely — from any form of rights on their bodies whose property is fully taken by the torturers. One can doubt that any of the American soldier or CIA employee who committed rape, torture and assassination on Iraqi prisoners did read Sade or watched Pasolini’s film. Yet, the unbearable fictitious work of these two authors help us to articulate our visceral anger when seeing these ‘real’ images. We need to be as close from fathoming what the absolute power exercised on a body constitutes — actually fathoming it is either impossible or would make us loose any form of sanity. This difficult collective understanding is necessary for us to prevent its actualization.

Below are the photographs of Abu Ghraib (2003-2004): As written above, they can be potentially traumatizing.