Addendum: Snøhetta’s response to this letter can be read below the names of the signatories.

This letter to you originates from Paris where, one of your design is slowly materializing into what soon will be the new headquarters of France’s major newspaper Le Monde. You are hopefully aware that the construction site of this project has been the place of a crucial struggle for workers’ rights these past few days. In fact, as we are writing you this letter, some of our undocumented worker comrades, along with the union CNT-Solidarité ouvrière (Labor National Confederation-Workers solidarity) have been “inaugurating your building” (their words) occupying day and night the construction site as a means to obtain reparations. 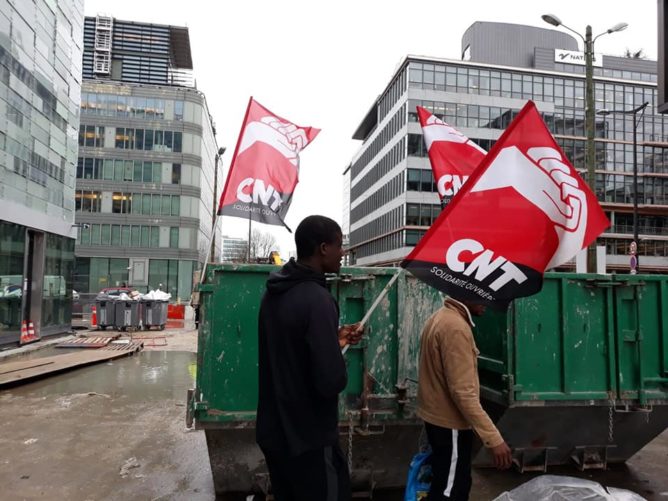 About 30 undocumented workers have been hired by two subcontractors (CICAD and Golden Clean) of the fifth largest construction company in Europe, the infamous Eiffage, which has been hired by Le Monde for the construction of the steel structure and facade of “your building.” Similarly to the situation of many undocumented workers in Europe, these workers have been exploited and their labor is legally qualified as “dissimulated” by the French Penal Code.

Some of the 600 Gilets Noirs (group of undocumented activists), who, on July 12, 2019, succeeded in occupying the French Pantheon before being violently charged and beaten by armed racist police, are part of the occupation. Gilets Noirs activists — many of whom came to live and work in France from Mali, Mauritania, Guinea, or Ivory Coast — have been stressing the many reasons that make their extremely precarious conditions the effects of colonial structures, both in the way their countries still exist in an economic, military, and political dependency imposed by France, and through the process of racialization to which the French state and its representatives (the police in particular) are subjecting them. It is also crucial to understand that the status of undocumented workers does not only make them economically vulnerable, it also makes them virtually disposable and creates conditions of potentially deadly physical harm. Every year, many undocumented workers die on European construction sites with no accountability whatsoever for the many people responsible for this situation — even far from the shores and way into its land, Fortress Europe continues to kill racialized people.

As the architects of Le Monde‘s headquarters, you are part of the entities politically responsible for the conditions of labor in which your design is being materialized. As such, you cannot claim neutrality, and we, 258 architects and non-architects from various places of the world, formally ask you to unequivocally position yourselves with regards to this situation. If you choose to side with Eiffage, claims that this is not your responsibility, or decline to answer, we will consider you as political adversaries and hold you publicly accountable. If, on the other hand, you recognize that architects are co-responsible for the labor conditions on the sites of the materialization of their design, you can establish an important precedent for the profession, undocumented workers’ rights, and society at large. In doing so, you must explicitly communicate to Eiffage your support to undocumented workers’ claims so as to put pressure on them as it is your prerogative.

We thank you for your time and hope to hear from you as soon as possible.

We are saddened and caught off guard by the news about the situation for the cleaning personnel on the Le Monde Group Headquarters building site. We support the personnel’s demands for fair treatment and urge for an agreement that ensures that working regulations are respected.

Ever since working on the Bibliotheca Alexandrina, we have actively been advocating for workers’ rights on the building sites in which we have been involved around the world. This includes health and safety regulations for construction workers as well as their overall contractual conditions.

We will continue to do our utmost to make sure that workers’ rights are respected. This incident is an important reminder that both we and the building industry must work even harder to prevent unjust treatment of workers – both today and in the future.