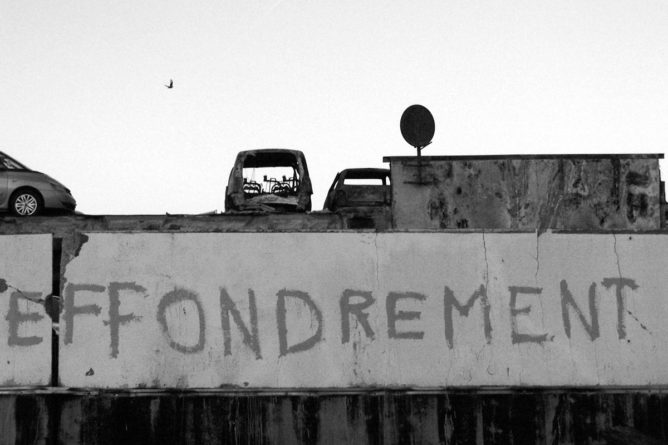 Léopold Lambert – Paris on April 29, 2015
If you enjoy articles of the blog, have a look at The Funambulist Magazine!

In last January, French Prime Minister Manuel Valls described the situation of the French banlieues (suburbs) as “a territorial, social, ethnic apartheid.” Beyond the problematic use of the term of “apartheid” that tends to normalize South Africa’s history — I personally use it in the context of Palestine, because the political intensities of both situations are somehow comparable — we could potentially appreciate the gravity of the words from the head of the government, if they actually corresponded to a radical national plan of territorial revalorisation, as well as an unequivocal acknowledgement of responsibility from the political ‘class’ for what is surely the most important issue of the country (Valls was himself mayor of Evry in Paris’s Southern suburbs between 2001 and 2012). Although Valls probably did not intend to have the term ‘apartheid’ understood this way (we can also suppose that he never really thought about what the apartheid actually is), we cannot strip it away from the governmental strategy contained within it.

Ten years ago (October-November 2005), an important revolt started in the banlieues after two Black and Arab teenager, Bouna Traoré et Zyed Benna, died from electrocution (October 25) while running away from a vehicle of the BAC (Brigade Anti-Criminality, a branch of the police, known for its regular verbal and physical violence against the banlieues youth) that suspected them from having trespassed a construction site. The movement of outrage for this particular event and, more generally, the territorial and citizenry exclusion that the banlieues constituted, mostly manifested in numerous vehicles and buildings set on fire. On November 8, 2005, President Jacques Chirac (assuredly inspired by his then Minister of Interior…Nicolas Sarkozy) declared the state of emergency. Although many of the exceptional measures allowed by this legal state were not applied — a curfew was however applied in six neighborhoods — we can see in this decision how the state considers discursively and politically the racialized and economically precarious populations of the banlieue as absolute otherness. The state of emergency ended on January 4, 2006, a long time after the last car burnt, and ten years later, things have only gone worse between the economic struggle than a majority of the banlieues population has to face, as well as the increased liberation of physical and verbal forms of racism and islamophobia.

Two days ago, Republican governor of Maryland Larry Hogan declared the state of emergency on the city of Baltimore, that authorized the deployment of the national guard in the city, as well as the possibility for Baltimore mayor, Democrat Stephanie Rawlings-Blake to implement curfews between 10pm to 5am in the city. This decision followed days of revolt from the African American population after Black 25-year old Freddie Gray died of a spinal fracture evidently caused by the police officers that just arrested him (April 12, 2015). The exceptional measures taken both by the State of Maryland and the Municipality of Baltimore can be understood, once again, as the essentialization of a part of the country’s population as fundamentally other to citizenry, which is, itself, the reason of existence of this revolt. An illustrative indicator of this process of making a population an essential other is the legal non-differentiation between political state of emergencies (like this one or in 2013 Boston) and the natural disaster related ones. As argued many times on this blog, this legal and political regime has also a strong urban implication since the very walls built to organize bodies in the city space then enforce their imprisonment during the curfew hours. Moreover, these same walls carry in themselves and in their spatial layout, the social condition of the bodies that they ‘host,’ which makes this type of exceptional legislation reinforcing the social inequity of the city.

As we already observed during the Ferguson uprising against the police (see past article), what is striking is the level of military weaponry used by the police and national guard against fellow citizens. But again, this might be the time to reconsider the idea that such an idea of citizen fellowship actually exist, since every time we use this concept, it is done to the detriment of the non-citizens. A good example can be found in the problematic national debate about whether or not the US army can legally assassinate an American citizen overseas when (s)he is suspected of terrorism. While time is wasted on this question, the Pakistani, Afghan, Iraqi, Somalian, and Yemenite populations remain at risk from the blue sky (see past article). Perhaps it is time to recognize that there might be more similarities between a young Palestinian and a young African American throwing stones at a faceless military machine — we saw it in the solidarity between Palestine and Ferguson — than there is between a poor Black US citizen and a middle class White one. Although this affirmation seems to serve well a political manifesto, we have to admit that things might be a bit more complex than that: after all, 21% of the soldiers enlisted in the US army is Black, and we can expect a similar percentage in the currently deployed National Guard.

Nevertheless, it is impossible not to recognize that an economy of lives exist and, within it, all lives do not have the same value. One of the recent days’ slogan in Baltimore has noted a significantly more important outrage for “broken windows” (in reference to the multiple broken windows of banks and supermarkets from these last days) than “broken spines” (in reference to Freddie Gray’s murder by the police). The question of the economy of (human) lives in relation to other livings (Paris Hilton’s dog or Marine Le Pen’s cat) and objects (Baltimore’s windows, or much more importantly, Mossul’s antic heritage) is an interesting one, but we cannot afford to ask it before every human lives’ values do equate. Because the police and the military operate as agents of death (whether biological or social), its specific deployment against a specific population signifies to the latter that their lives can be sacrificed to preserve others’ (again, biologically or socially speaking). Only a few days earlier, Senegalese novelist Fatou Diome had expressed the following scream after that about 1,700 migrant lives were lost in the depths of the Mediterranean Sea in the last two weeks: “If the people who are dying were White, the entire Earth would tremble” (see video).

The state of exception is not as much a temporal condition (as its legal avatar declared by the Governor of Maryland would suggest); it is, rather, the territorial, social and ethnic condition of exceptionality to which Valls referred, when talking about the banlieues “apartheid.” The emergency is therefore wrongfully addressed: the urgency and the disaster are real, but the state of emergency is declared against those who suffer from them.