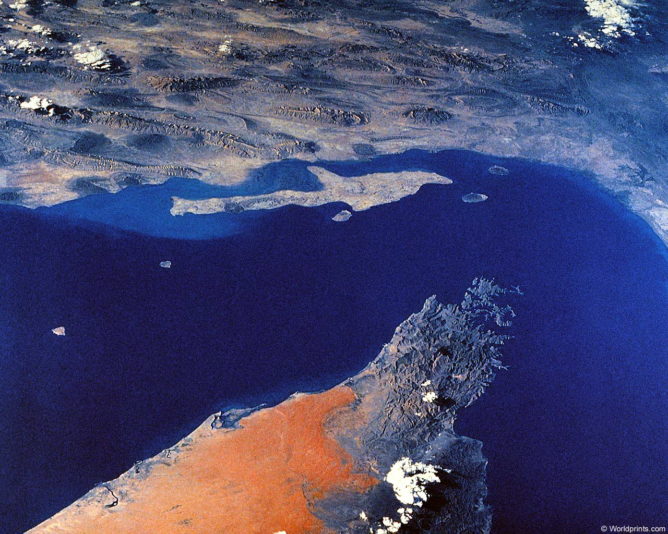 Léopold Lambert – Paris on March 23, 2015
If you enjoy articles of the blog, have a look at The Funambulist Magazine!

This article aims to be in the continuity of the recent one about the Suez Canal and the geopolitics of submarine Internet cables, as well as a contribution to my first attempts articulating a few ideas around the idea of what I would like to call, “the politics of narrowness.” that I recently started by presenting an essay about the “political geographies of the corridor” at the University of British Columbia a few days ago. In this regard, the following text constitutes more a general approach of the international legislation that organizes passages in the geopolitical typology of straits, in this case the Strait of Hormuz between Iran and Oman, than a specific statement about the region about which my ignorance is large. The choice for the Strait of Hormuz is however, not innocent insofar that it is the object of great scrutiny both by world economic powers for its crucial characteristics in the transportation of oil, and by the local governments, in particular Iran, that look at the presence of numerous Western warships in the Persian Gulf as a potential threat to their sovereignty.

The United Nations Convention on the Law of the Sea (UNCLOS), in its third version, conceived in 1982 and implemented in 1994, constitutes the legal frame of the maritime passages in straits of the world. An historical change this piece of legislation allowed was the substantial extension of territorial waters, from 3 to 12 nautical miles from a given country’s coasts. The direct consequence of such territorial offset can be found in the incidental nationalization of straits such as Gibraltar, Malacca and Hormuz. The latter being only 21 nautical miles wide, the separation of Iranian and Oman territorial waters is established at equidistance of the two facing coasts, thus leaving no passage in international waters. As Nilufer Oral explains in an article for the American Society of International Law, the right to passage in straits as defined by UNCLOS III constitutes “the exercise in accordance with this Part of the freedom of navigation and overflight solely for the purpose of continuous and expeditious transit of the strait between one part of the high seas or an exclusive economic zone and another part of the high seas or an exclusive economic zone” (article 38). UNCLOS III has never been signed nor ratified by the United States that do not recognize the extension of territorial waters as implemented in 1994. Iran signed the treatise but did not ratify it, in order to apply its provisions only to the legislation parties. Regarding non-signatories like the United States, it claims to apply the former piece of legislation organizing navigation in straits, the 1958 Geneva Convention on the Territorial Sea and Contiguous Zone. The latter authorizes a coastal nation to apprehend ships in their territorial waters if their passage is perceived as “non-innocent,” that is, if a threat to the regional peace can be proved to be affected through their presence.

Since 2011, the Iranian government has threaten several times to shut down the strait by setting up submarine mines that would prevent both commercial and military ships to communicate between the Persian Gulf and the Arabian Sea (and. by extension, the rest of the maritime world). Unsurprisingly, the United States and the European Union have reacted strongly to these threats and have mobilized part of their fleets (the US Fifth Fleet, as well as warships from the British and French navies) in the Persian Gulf. About a month ago, the Iranian Navy organized a drill in proximity of the Strait, during which its warships attacked a replica of a US aircraft carrier, thus providing the suggestive representation of Iran’s military means in the maritime corridor that Hormuz constitutes. This military exercise intervened only a few days after an admittedly more unexpected intervention of Japanese Prime Minister Shinzō Abe at the DIET (Japanese National Parliament), affirming its will to engage the army in a potential operation of minesweeping, should Iran closes the Strait. This discursive voluntarism confirms Abe’s problematic vision for the future of the Japanese Self-Defense Forces in an increasingly loose interpretation of the notion of defense before contemplating a change in the Constitution to reform the army. Abe described the hypothetical shutdown as “a situation that clearly causes as serious and significant damage as a direct armed attack on Japan” (source). Such a broad interpretation of what constitutes “a direct armed attack on Japan” particularly illustrates the revisionist attitude of the Japanese government since Abe was elected in December 2012: through speeches involving Japan’s expansionist past between 1931 and 1945, he has argued that the occupations of Manchuria and Korea can be interpreted as being of defensive nature. By doing so, he thus perpetuates the imperialist rhetoric that legitimizes its military action by oxymoronic positions of what we could call “preemptive legitimate defense.”

The Iranian Navy attack on a replica of US aircraft carrier during a drill near the Strait of Hormuz (Feb. 25, 2015) / Iranian Tasnim News Agency

Oil and goods are however not the only element at stake in the fluid function of the Strait of Hormuz. The Persian gulf has been a crucial maritime territory for the US navy and its allies during the two wars on Iraq, as well as in the current strikes against ISIL by the international coalition. In this regard, a look at the Facebook page of the US Navy aircraft carrier USS Carl Vinson (see this page for all aircraft carriers current location) reveals its daily proximity to the French aircraft carrier Charles de Gaulle, deployed in the region in February in response to the January attacks in Paris — the causality expressed here being more linked to populist aims than effective military ones. We can thus envision parts of the Persian Gulf as a mobile maritime military basis from which rapid attacks can be lead in the region. Although the Iranian government — and its Shia eternal ally Hezbollah — is also involved in military operations against ISIL, the access for Western warships to the Persian Gulf through the Strait of Hormuz remains a delicate endeavor, carefully monitored by the Iranian authorities. The proximity of small patrolling Iranian boats to the massive US warships thus often creates a delicate tension whose handling is crucial to the so-called “stability of the region,” as a 2012 Warda Al-Jawahiry article assesses.

American and French aircraft carriers, USS Carl Vinson and Charles de Gaulle moving at close distance from each other in the Persian Gulf (March 8, 2015)

From both a military and an economic standpoint, the issues at stake in the 21 nautical miles wide corridor that is the Strait of Hormuz are therefore tremendous. On the contrary of the Suez Canal, this narrow passage is geologically formed and not humanly engineered and, although the legislation organizing its navigation is, by definition, human-made, it is interesting to observe that it does not follow any geographical specificity but rather adopts the universal (and thus abstract) regulations. Such absence of specificity, for better or worse, has drastic consequences, the non-ratification of UNCLOS III by the United States certainly being one of them. Although this text escapes the scale of architecture in general, and the common understanding of what is a corridor in particular, we ought to note that the legal, military, economic and geopolitical issues described throughout this article essentially exists because of the narrowness of this maritime passage. We can thus already interpret “the politics of narrowness” as the politics of inherent friction between bodies (should they be container/warships) and the physical borders of exiguous spaces. In this specific reading, what is true at the scale of a 3-foot wide corridor is also true at the scale of a maritime strait.

NOTE /// Although I do not believe that I directly borrowed ideas from them, this article was written in the imaginary provided by the work of Laleh Khalili and her recent trip on a container ship between Malta and Dubai, as well as the fresh reading of Deborah Cowen‘s book The Deadly Life of Logistics: Mapping Violence in Global Trade (University of Minnesota Press, 2014).