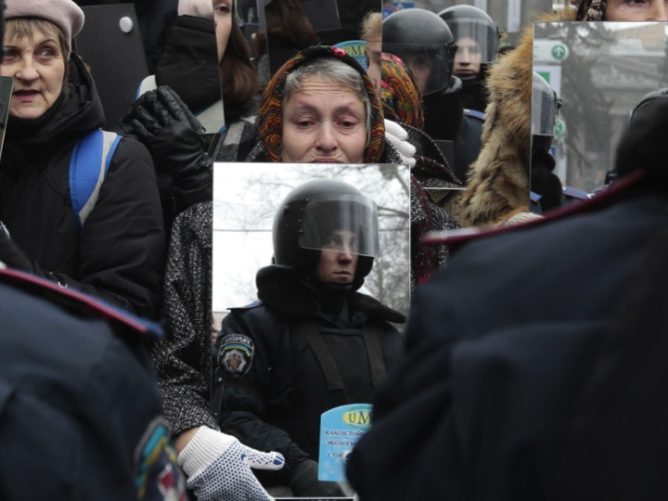 Protesters in Ukraine holding mirrors to show the police their own reflection / Photograph extracted from the lecture ““How to Dress up a Police?,” by Ethel Baraona Pohl at the seminar Missions and Missionaries at the Het Nieuwe Instituut (Rotterdam, Nov. 27, 2014)

This article starts on the bases of the lecture given by friend Ethel Baraona Pohl at the seminar Missions and Missionaries organized by Malkit Shoshan at the Het Nieuwe Instituut this last Thursday, as well as the conversation we had together subsequently for the need of Archipelago. Ethel’s lecture, entitled “How to Dress up a Police?,” particularly insisted on the sartorial aspect of the police along the 20th century, arguing that the process of militarization of the police of the world has substantially accelerated this last decade. Both through the lecture and the Archipelago conversation, she presented the economic logic at work behind this militarization process and the necessary production of a fearful environment associated to it. As she says, the use of the distributed weaponry to the police retroactively legitimates their purchase in the first place. We can also insist in the philosophical founding of such logic. The very fact that a given police owns anti-riot equipment (flash balls, tear gas, etc.) stigmatizes the speculative vision that a state develops, imagining in advance, an antagonism of crowds that fundamentally disagree with its policies. Such an anticipative vision certainly undermines the democratic claims that many of these same states pretend to embody.

The images we receive from Ferguson, MO illustrate the result of the United States’ martial policies, imported nationally after their international implementation. Many articles have been written about how equipment used by the US army in Iraq and Afghanistan finds its way back in the United States through its use by the police. Many things have been also said about the contrast between soldiers’ experience vis-a-vis this same equipment and the police officers’ irresponsible use of weaponry (aiming guns directly at bodies for instance), but insisting too much on this aspect of things might implicitly legitimize their use by the US army in the first place. Many things could also be said about the privatization and commodification of ‘security’ around the world, from the American Universities’ campuses — I am thinking of University of Chicago in particular — to the use of private contractors in wars (the American-UK war in Iraq being its paradigm).

The argument that I would like to make here however, is elsewhere. Darren Wilson is the white policeman who shot and killed young African American Michael Brown on August 9, 2014 in Ferguson. When he was released from any charges by the county Grand Jury last week, an important amount of us were profoundly shocked by what was considered as an absolute denial of justice — this “us” is however not an equal one since we are far to be equally concerned in our very flesh by this decision as we will see further. Others declared, in a well-known cynical attitude of “I told you so!,” that there was nothing surprising in such a decision, allowing them to go back not too care about the world from which they comfortably declare to expect nothing. What is true, however, is that our faith in what we call “justice” may blind us from its very functional mechanisms. The institution called “Justice” pretends to deliver, indeed, justice, (a settlement based on a collective ethics favoring the social ties between individuals), but what it actually delivers is the categorization of subjects as either lawful or unlawful, that is their position vis-a-vis the law.

The law is the crystallization of politics. It enforces the relationship of power between the individual of a given society, supplying the conditions for social violence to be exercised. The fact that French associates the police to the function of “sustaining the order” (maintien de l’ordre) or, even more expressively, English attributes to the police the function of “law enforcement,” is highly illustrative of such logic. When countries like the United States or many others in Europe are built upon structural and legal racism, it is normal that the “law enforcement” consists in the violent domination of the same subjects against which the law was built. The anticipative function attributed to the police — a paradigm whose birth can be found historically — particularly exacerbates its violence. In order to anticipate ‘unlawful’ behaviors, the police needs to targets groups of individuals that it subjectively estimates as more inclined to adopt such behaviors. This estimation is simultaneously based on and feeding both individual and collective imaginaries (and by extension, the law). If racist imaginaries are particularly at work within a given society, the police will target the population subjected to this racism, declares some of its members’ behaviors as unlawful, and thus feeding the same imaginary on which it based itself. The law will then accentuate its pressure on this same population, thus increasing the amount of unlawful behaviors in a perpetuation of the spiral of violence on its subjects. We can think about the fate of the African American communities in the United States for example, but also about the various European legislations at work against the Muslim populations (through the ban of the hijab in public education in France for instance) and the Roma populations (through the criminalization and destruction of their settlements for instance).

The point of this article is not to claim that there would be a position ‘outside the law,” which would then entitle to a position outside the relationships of power. Instead, its goal is to sensitize on the idea that the law (and therefore the institution of ‘Justice’) is not a transcendental benevolent deity coming down to earth to distribute its just gifts, but is rather simultaneously the representative and the legal fuel of the degree of violence at work within a given society. In this regard, the police is nothing else than what it embraces to be: the “law enforcement.” In this interpretation of it, we then have to wonder how much we are embodying ourselves the police, that is how much the law advantages ourselves, following the idea suggested by the photograph above provided by Ethel’s lecture. When a mirror is handed to the police, how much do we see ourselves in it?