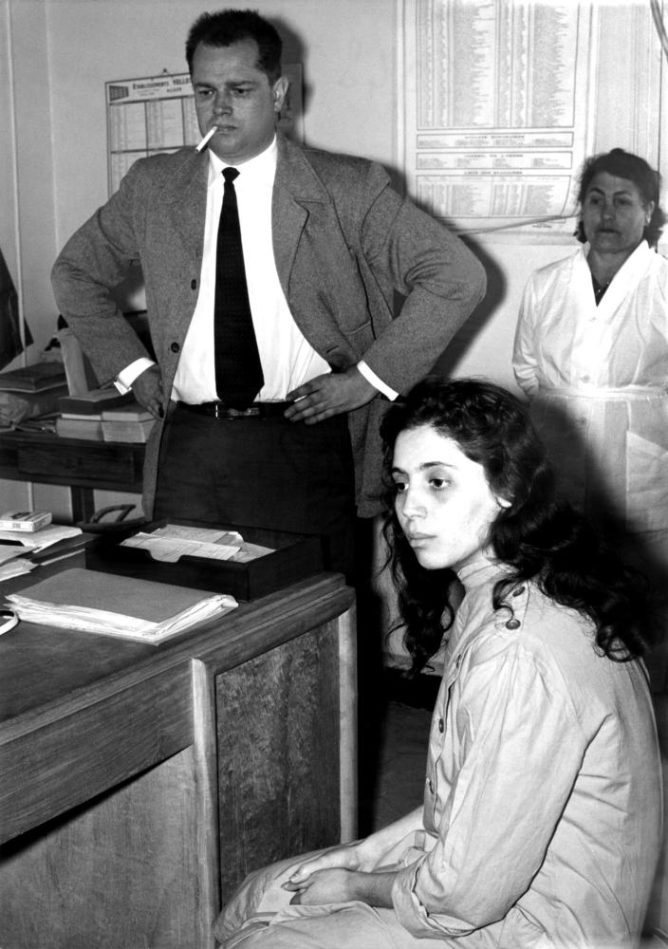 Léopold Lambert – New York on April 29, 2014
If you enjoy articles of the blog, have a look at The Funambulist Magazine!

Every time one refers to recently deceased lawyer Jacques Vergès, it seems like some discursive precautions need to be taken. This is likely to be because commentators deliberately stop at the name of his clients (Klaus Barbie, Slobodan Milošević, Carlos, etc.), without listening to Vergès’ plea, which significantly render more complex these defenses. What he calls himself “rupture defense” or “rupture strategy” is not actually a defense; quite on the contrary, it is an offensive against the very principles that set the prosecution. The historical trial of Djamila Bouhired in 1957 is particularly illustrative of this strategy.

Bouhired was a member of the Algerian FLN (National Liberation Front). During her trial, she was convicted to have placed a bomb in a cafe in Algiers that killed eleven French colons. She was not the first one to be judged for similar crimes referred by the French colonial administration as “terrorism.” Most of the lawyers who were pleading for accused Algerians were French leftists who were trying to attenuate the circumstances of their client’s crime to the colonial court; a sort of negotiation that proved not to be efficient. Vergès, when he undertook Bouhired’s defense however, used this “rupture strategy,” which consists in rigorously accepting the description of facts that the colonial prosecution deploys, embracing the absence of attenuating circumstances to the crime, and furthermore, to affirm that the accused does not regret her or his crime and would be eager to commit more if given the opportunity.

The point of rupture consists instead in the categorical refusal to recognize the legitimacy of the court itself, as well as the larger authority that it represents. In the case of colonial Algeria, this means denying the right for a French court to judge Algerians, and rather than defending the position of Bouhired, to attack colonialism itself. Vergès, who was particularly fond of the literary genre offered by tragedy as we will see later, regularly tells the story of Bouhired bursting in laughter when receiving her condemnation to death — she was finally pardoned and liberated in 1962 — and the judge reacting to this laughter by telling her: “Do not laugh Miss, this is serious!” The laughter is the most dramatic evidence of the impossibility of a dialogue between the accuser and the accused. As Henri Bergson wrote in Laughter: An Essay on the Meaning of the Comic (1900), laughter is essentially functions on a discrepancy. In this case, the discrepancy consists in what both parties recognize as legitimate authority; the dumbstruck outrage of the judge that betray his absolute impossibility to understand the first thing about Bouhired’s position.

Vergès often refers to Antigone (see this 2009 lecture for example) as paradigmatic of his interpretation of justice — the comparison with tragedy being admittedly a way to dramatize his own role. In the past, I have analyse the difference between two types of crimes (see past article): the selfish crime (murdering someone for one’s own interest for example) and the crime against the law itself (like in the case of Rosa Park sitting in the white section of the Montgomery bus). Antigone, however, offers a third type: the necessary crime. Such a crime is not a crime against the law itself but, rather, a crime that is characterized by the impossibility of its perpetrator not to commit it, and therefore also by the acceptance of its consequences. Antigone cannot not bury her brother Polynice after he was killed by the ruler himself, her uncle King Creon. The latter who had forbid anyone to bury Polynice, judges Antigone and condemns her to death. She does not try to defend herself; on the contrary, she attacks the legitimacy of Creon to have issued such an unjust order.

Bouhired and Antigone’s stories carry similarities indeed. Their trials do not have for subject their crime, but rather, they investigate and debate the very rationale of the system (colonial for Bouhired, despotic for Antigone) of which the court is fully part. What Vergès noticed with Bouhired’s trial and the rest of cases he took in his life, is that the dramatization of the court simultaneously affirms a legitimacy and offers the conditions for it to be contested. There can be what is commonly called “simulacrum of justice” only if all parties involved in this dramatization take the parts that they are being attributed. The rupture evoked by Vergès precisely consists in refusing this role and returning the spotlight that a court has meticulously constructed against it.