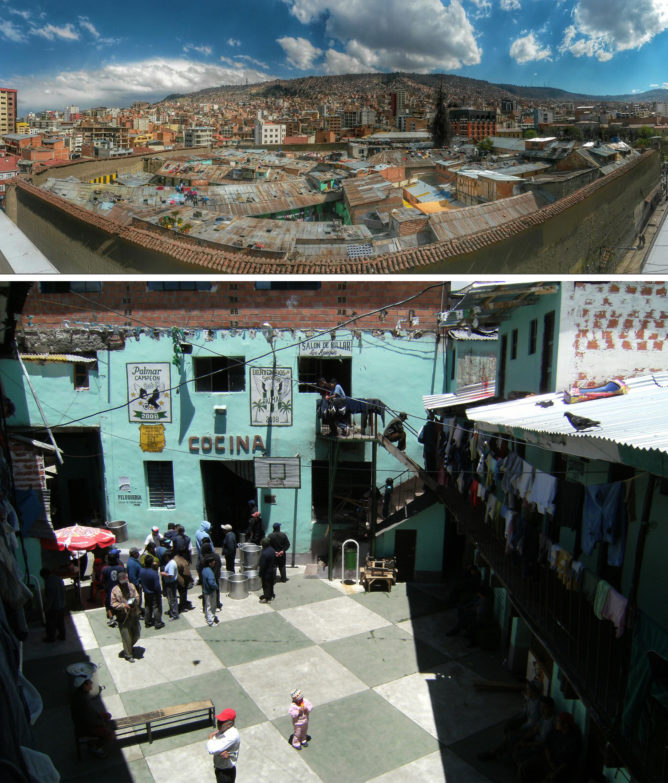 Léopold Lambert – Paris on April 1, 2015
If you enjoy articles of the blog, have a look at The Funambulist Magazine!

As many of you know, the topic of the prison is a particularly important one on The Funambulist. Questioning the prison is approached through two primary aspects: the necessity for such an institution to materialize into an architecture to implement its function serves as a paradigm of the relation architecture and societies maintain (see past article for instance), and examining the act of incarcerating bodies as being contained within the essence of architecture.

The example of San Pedro prison in La Paz helps us wonder about the very function of the prison, and its means of implementation. This prison, situated in the center of the Bolivian capital city, hosts 1,500 detainees who are free to come and go within the perimeter of the complex. In it, inmates live with their families, practice a profession, rent their cells, play pool or table-football, and tourists occasionally visit the facility. Such a scenario can remind us of Escape from New York, a 1981 John Carpenter film depicting a future where the entire island of Manhattan has been transformed into a city-scale prison, where thousands of detainees organize in society (following a scheme that does not differ much from the one outside of the walls). Such a spatial organization of the prison allows us to question the very principle of this institution.

One can distinguish three main aims that the traditional prison attempts to fulfill:
– (1) The side-lining of individuals who have been judged guilty of illegal acts
– (2) Punishing these same individuals in their very body so that they repent of their acts (this presume that the individual did commit that for which it has been judged guilty)
– (3) Displaying a spectacular example as deterrence to the rest of the society
As we will see further, I do not recognize any of these three aims as legitimate and believe that no efforts are made to find alternatives to them; however, aim (1) appears to me as more defendable than the two others, since it limits itself to the judiciary realm without constructing a moralizing narrative around it — although even this might be debatable when considering the dramatic ceremonial of the forced exile. Aims (2) and (3) have nothing to do with the judiciary: they implement themselves in conscience, something on which the judiciary has no claim. Aim (3) even intervenes as preemption, which cannot be understood by the judiciary. In other words, the law delineates a field of activity (whether rights or duties) recognized as legal, and another as illegal: it should not apply an additional layer of morality upon this delineation.

The paradigm offered by San Pedro prison is one that attempts to only implement this first aim of side-lining. The fact that families have the possibility to join their incarcerated member in it is a proof that only the spatial separation of individuals recognized as guilty from the rest of society is targeted here. In this regard, it is interesting to note that this prison is not situated in the countryside, geographically remote from the dense areas of population. Rather, it is situated in the center of the country’s largest city and only the outer walls of the prison are implementing this intense separation of bodies. It thus constitutes what Adi Ophir, Michal Givoni and Sari Hanafi call “an inclusive exclusion” within society. This observation invites us to think that San Pedro prison should in no way be considered as ideal: never should something proved as “better” than something else should be automatically declared as “good.”

There is one characteristics of the prison that is intrinsic to this institution: the construction of an essence of individuals who have been judged guilty. Within the prison walls, all incarcerated bodies belong to the same essence within society (whether we call them “criminals,” “convicts,” etc.). A simple way to says this would consists in noting that not every individuals have been condemned for the same crime, but they are all incarcerated by the same walls. However, this would simply multiply essences, distributing one for each crime recognized, and thus perpetuate the same social violence. The walls create this essence: individuals who are coercively kept in the perimeter they delineate are forced into this essence regardless of the uniqueness of their past, of their personality, of their body. Here lies the fundamental social issue of the prison.

Our most insightful politicians understand that an individual tends to “socially deteriorate” when spending some time in prison; yet they all attribute this deterioration to the “bad company” one encounters there, thus reproducing the division into moralizing essences even within the prison: there would be individuals who can be “saved” on others who are forever “lost.” Instead, the problem seems to be that the walls creating a community of inmates simultaneously construct a common essence that these inmates forcefully share. The recognition between individuals who have been attributed an essence is then only natural. In other words, the fact that an inmate would identify more with a fellow inmate than any other individual from the rest of society, is manufactured by the surrounding coercive walls. Whether bodies are free to come and go within their perimeter like San Pedro Prison, or forcefully kept in confined cells like in most other prisons, does not challenge the very essence of the prison. If the judiciary were to no longer rely on architecture in order to implement its judgment, such a challenge would then be likely to exist.