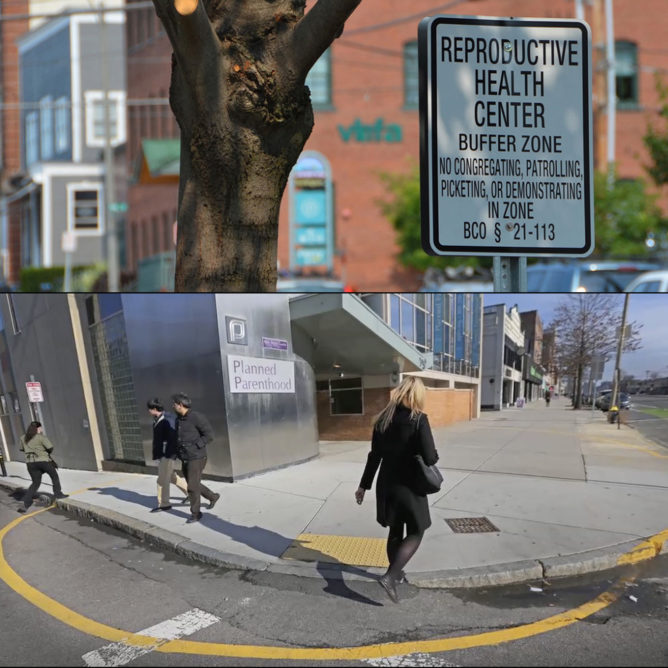 Yesterday, June 26, 2014, the American Supreme Court ruled that the Massachusetts legislation that used to enforce a 35-feet (barely 11 meters) buffer zone in front of abortion clinics was anti-constitutional (thanks Mimi for the info). Religious and/or conservative groups in North America are organized to semantically and verbally pressure women on their way to get an abortion with various degrees of aggressiveness. The buffer zones around abortion clinics are thus though to materialize “safe spaces” where women can be protected from such pressure. We could try to look at the concept of buffer zone abstractly and ponder the question of what it means to suspend some rights (of expression in this context) on a given space; however, that would be forgetting two fundamental facts about this specific situation: the first one consists in the observation that similar zones are systematically applied around bodies (whether politicians, movie stars, or professional footballers) that are considered (reasonably or not) at risk from a given crowd. In this case, buffer zones are implemented by temporary fences and/or bodyguards that make these areas move with the concerned body. The second fact that fundamentally differentiates this last debatable example from the clinic’s buffer zones is that women who are on their way to get an abortion are systematically antagonized by the surrounding crowds that can tremendously increase their emotional vulnerability. The legal aspect of the violence of this antagonism might not be directly physical, this violence unfolds itself from a group of people in a position of power toward a precarious body: it is therefore a clear case where the law is required to envelop this body with protection.

We often encounter the concept of “safe space” within groups of people, where opinions and feeling are encouraged to be expressed and, thereby an atmosphere of protection against moral judgment needs to be implemented. Whether on specific sites on the Internet or in the semi-private spaces of associations, safe spaces are to be materialized through the social relation of the bodies involved. However, when a safe space needs to materialize within public space, safety cannot simply occur through the social link: it needs to be implemented as actual space.

Once again, I go back to the idea that the concept of “weaponized architecture” does not mean that our architectural manifesto should consists in defusing the violent characteristics of architecture but, rather, in using these same characteristics to implement the site of a collective ethics constructed as such. In the case of the clinics’ buffer zones, this means that not only such zones should exist, but that they should be implemented with a stronger architectural gesture than the trace of a line on the floor (see below). With regards to my writings about weaponized architectures, this does not mean that there would be an aggressive architecture on the one hand that we should fight, and a defensive one that we should create on the other hand. The architecture discussed here would actively contribute to the exclusion of bodies in the same way that many other examples discussed on this blog; the difference lies in the fact that the excluded bodies here are socially in a position of power vis-a-vis the body that seeks protection.

Violence here, mostly unfolds through semantics (signs, banneers, etc.) and language. A 35-feet buffer zone does not therefore protect a body from being invaded by the sonic and visual effects of this violence. One can be sensitize to the various political arguments — i.e. to the collusion of collective ethics — that exist around a given question (in this case, the question of abortion), but the entry of a  woman in an abortion clinic is not the moment of the political debate: it is for society, on the contrary, the moment of respect of a choice that has been made beforehand. The confrontation between the vulnerable body and its antagonists should therefore never occur in any form when the effects of this choice are about to materialize or when they just did. Abortion is a healthcare matter: this means that a body has to be protected both medically and socially. Just like the medical conditions of an abortion have to be optimized for the body to be safe — I am hoping that no one will actually deny that — the social conditions have to be optimized to guarantee the emotional and physical safety of the body as well. Space being involved, so should be architecture.

Buffer zone simply enforced by a line on the floor