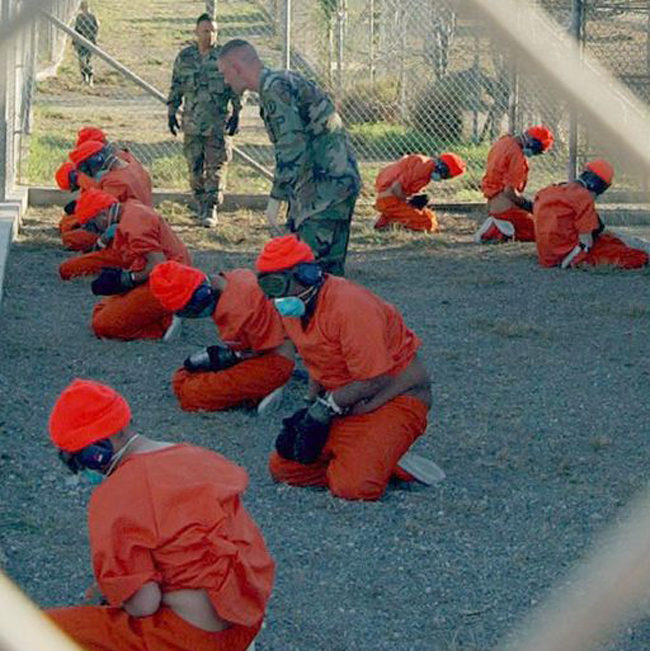 The 49th conversation I had for Archipelago was a conversation with A. Naomi Paik about her forthcoming book, Rightlessness, which examines the American production of rightless subjects through their incarceration into camps that function as legal fictions (read more on the podcast page). One of the three camps she considers as paradigmatic is Guantanamo Bay’s Camp Delta, where 149 detainees remain incarcerated without having received any due trial. Paik explains how such a camp can only exist once it has created a specific legal status that makes it function through a manufactured legality. In this regard, she attached a particular importance to the status of “enemy combatant” attributed to detainees for their kidnapping and incarceration to be enacted. This made me thought of this status of “enemy combatant” as operating through a legal illocution that I would like to examine here.

The term of illocution was spread through the writings of Judith Butler, who demonstrated that gender, as a social construction, was produced by perfomativity, and triggered by phrases like the one of the doctor at the birth of a baby: “It’s a boy!” or “It’s a girl!”. Nevertheless, we have to go back to J. L. Austin and his 1962 book, How to Do Things with Words that Butler regularly quotes. The illocution consists in enacting the content of words when pronouncing them. The phrases mentioned above can illustrate well such a definition in the context of gender; in the judicial context that frames the content of this article, we can evoke the example given by Austin himself: “I sentence you to…” that enacts the sentence when pronounced by a judge in a court. The simultaneous nature of the pronunciation of the words with their enactment makes their cancellation difficult as the illocution carries a sense of definitiveness. This is particularly important for the argument presented in this article, since the listeners of the illocution are often incarnating the subject of its words and, therefore, of its enactment.

In a past article, we had examined how interpelative (hailing) locutions could envelop bodies with violence when pronounced (often screamed) by a body exercising power like a police office for example (“Hey you there!” as analyzed by Louis Althusser). Illocution are even more powerful as they act as legal decision when pronounced by an authority , whether in the case of a judge as seen above, or in the case of a priest in the traditional “I now pronounce you husband and wife.” In the case of the Guantanamo detainees, as well as the various bodies assassinated by the drones of the US and Israeli armies, the illocution consists in solemnly declaring them “terrorist,” or “enemy combattant,” without going through the legal process that would normally attributes such status based only on the past actions of these bodies. The trial is the moment where the legitimacy of such a status for a body is to be debated and demonstrated in order for the final illocution to occur. Without trial, only the powerful entity that performed the illocutionary act of designating bodies as “enemy combatant,” can cancel the illocution’s effects. The body that receive this illocutionary designation cannot defend him/herself against it, since only the illocutionary authority has the right to speech and, therefore, the simultaneous access to language and legal designation.

As written many times these last weeks in the context of the Israeli army’s massacre on Gaza, Western armies operate with the legitimacy that manufactured national narratives provide. Televisual military officers categorically naming the members of a political party, “terrorists,” and the civilians living (forcefully) around them, “human shields,” therefore constitute forms of illocutions. They thus justify the systematic killing of the bodies subjected to them, without any judicial process; or, rather, the illocution itself is the judicial process itself. Palestinians of Gaza and the West Bank live under the military judicial system of the Israeli army that embodies both the ‘victim,’ the judge, and the executioner. While a civil judge pronounce the illocution “I sentence you to six months of prison” after a due judicial process, an Israeli (or US) army officer will simply need to pronounce “You are a terrorist, I sentence you to die” in order for the sentence to be enacted. The thing we need to remember is that the illocution is only valid if pronounced by a recognized authority, hence the need for a narrative allowing this recognition; the dissolution of the recognition would therefore make this speech invalid, and thus prevent it from acting as a judicial illocution. In other words, the illocution “You are a terrorist, I sentence you to die” could be disactivated by the recognition that the entity pronouncing this words has no legitimacy to the sentence it pronounces, or as the idiomatic phrase says “the King is naked.” Such a phrase could be our own illocution, the words that strip the king (or the military officer) from his clothes (i.e. his power).