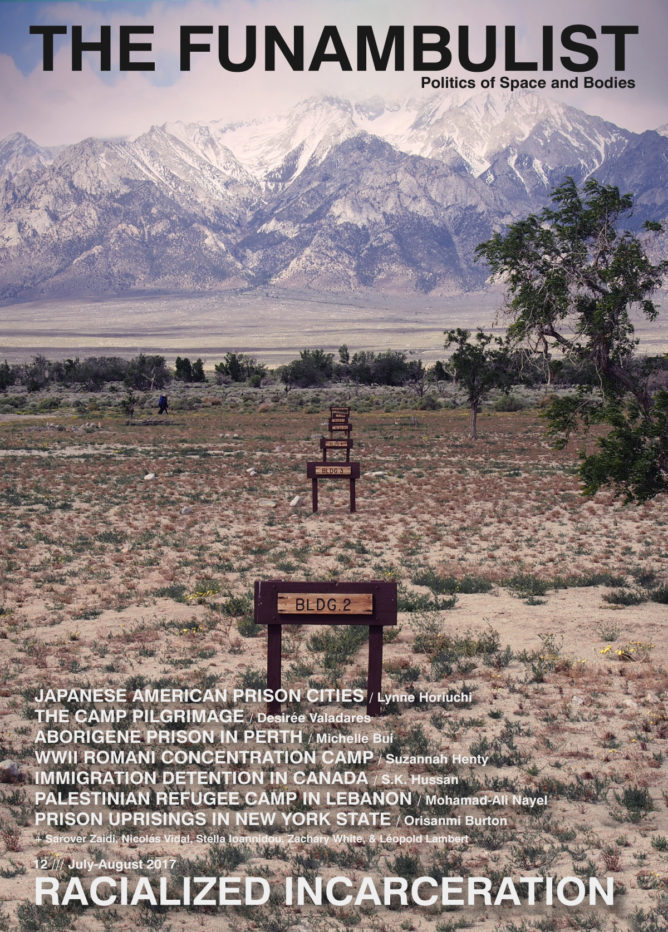 The small team of The Funambulist is happy to announce that the 12th issue of the magazine (July-August 2017) is now released. Racialized Incarceration constitutes a form of sequel to issues 4 (Mar-Apr. 2016, Carceral Environments) and 5 (May-June 2016, Design & Racism). This issue builds on these two precedents in demonstrating that incarceration is one of the horizons of processes of racialization and that architecture is an unsurpassable instrument of its enforcement. Through historical examples (concentration camps of Romani people in France, prison cities of Japanese and Japanese American people in the United States, an Aborigene prison in Australia) and contemporary ones (US prison industrial complex, immigrant detention centers in Canada, Palestinian refugee camps in Lebanon), The Funambulist’s 12th issue intends to illustrate how the violence of colonial and structural forms of racism endure time and materialize in space.

This new release offers us the opportunity to celebrate the second anniversary of the magazine and to prepare the third year of publication with new ideas (you can answer a survey about what these new ideas could be here). We would like to thank the 466 subscribers that support it on a monthly or annual basis, the one institution that offered it a generous grant, the 31 universities that propose it to their students and faculty, the 58 bookstores that carry it on their shelves, the 145 contributors who brought you the smart and sharp contents of these 12 issues, the 14 others who already accepted to write for issues 13, 14, and 15, the 12 places that hosted a Funambulist event in New York, Paris, London, Hong Kong, Tokyo, Prague, Montreal, and Zurich, the many friends consulted on covers, student projects, events, logistics, etc., the one copy-editor who accepts drafts three days before we have to go to print, the French Post employees who do not sigh loud enough for us to hear them when we’re coming with several hundred copies to ship and who greet us instead with a “here comes the Press!,” the two accountants who do not show their frustration in asking for a missing invoice or in repeating for the third time the way a tax form should be filled, the many activists and/or scholars who inspire us by their passion and intelligence, and more generally, all of those who, through a word, a message, or occasionally a hug, show us their support and encourage us to carry on. To all of those and many others, we say “Thank you!”