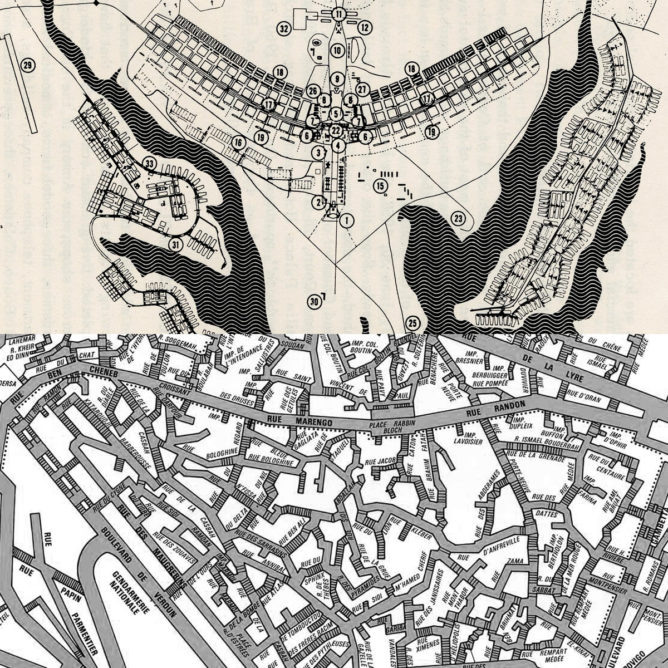 Above: Original master plan of Brasilia by Lúcio Costa (1957)
Below: Map of Algiers’s Casbah with its streets’ names

I recently had the chance to visit Brazil’s capital city, Brasilia, in order to record a conversation with anthropologist Antonadia Borges (stay tuned on Archipelago) at the University of Brasilia. Interested by the quasi-simultaneity of the Brazilian change of capital from Rio de Janeiro to Brasilia (1960) subsequent to the construction of the city from scratch, and the beginning of the military dictatorship (1964), I wanted to ask her about the ways that the design of the city may have allowed the dictatorial regime to thrive. In this regard, we can distinguish three scales of control facilitated by the creation of the new city of Brasilia:
– at a territorial level, removing the government from the largest cities prevented from a confrontation between its members and a substantial part of the country’s population
– at an urban level, the novelty of the city allowed the authorities to dispose of the city in the way that they saw fit, thus removing large parts of the working class from it, despite their active participation to its construction
– at a suppressive level, the controlled master plan of the city, designed by Lúcio Costa, allowed the military and police forces to stranglehold the urban space and the potential insurrections that could potentially occur in it.

Lúcio Costa and the main architect of Brasilia, Oscar Niemeyer, are well-known for their leftist political agenda — Niemeyer was a member of the Brasilian Communist Party and even its President in the 1990s — difficult to combine with the governing of the dictatorship. In this regard Niemeyer quit his functions at the University of Brasilia in 1965 and exiled himself to France in 1966 — his projects will however continue to be built in Brasilia. The responsibility of the political control exercised by the dictatorship as described above is therefore difficult to solely attribute to the urban designer and the architect. Nevertheless, it is fundamental to note that a city emerging from a homogeneous masterplan complemented with the ubiquitous designs of one architect and the landscape design of one other designer (Roberto Burle Marx), however talented and ‘well-intentioned’ they might be, is more or less consciously ‘dreaming’ of a military intervention to implement the designed plans. In other words, there is necessarily a degree of dictatorship in all design materialized into the realities of bodies. The scale of a body being relatively unalterable, we could make the hypothesis that this degree carries a proportional influence to the scale of the design, i.e. an entire city conceived according to one design will be more susceptible to develop a higher degree of violence than one sole building for instance. New cities like Le Havre (reconstructed, Auguste Perret, France, 1949), Brasilia (Lúcio Costa and Oscar Niemeyer, Brazil, 1960), Chandigarh (Le Corbusier, India, 1966), or more recently Masdar (Norman Foster, UAE, 2006), all materialize the political scheme of a unique design, against which only the slow entropy created by erosion, human behaviors, and multiple politics, is able to resist.

For the purpose of this article, it was in my interest to compare the homogeneity of a city like Brasilia with what appears to me as its heterogeneous urban alter ego: Algiers’s Casbah (as I did three years ago with the Manhattan grid). As I have been writing many times (with various degrees of romanticization admittedly), the Casbah, through its labyrinthine streets, its topography, its architecture, its roofs, facilitated the guerrilla activity of its inhabitants, members of the Algerian FLN (National Liberation Front) during the independence war against the French army (1954-1962). What I have been less describing is how the Casbah had also been instrumental to the Algerian resistance against the French colonization in 1830. It is therefore not innocent that the colonial authorities destroyed a large part of it — it used to reach the sea — during the subsequent era of “pacification” of Algeria. In this regard, we can note that the General Governor of Algeria from 1840 to 1847 was Marshal Robert Bugeaud — nominated by the infamous Adolphe Thiers — who wrote a treatise about The War of Streets and Houses (read about it in my essay “Abject Matter: The Barricade and the Tunnel“) after his suppression of the 1848 revolution in France.

The partial destruction of the Casbah is nevertheless not the only attempt to counter its weaponized characteristics in favor of its Algerian inhabitants. A significant step was much less material than destruction; it consisted in the ‘administrativization’ of the Casbah through the attribution of street names and house numbers. Of course, the names of the streets themselves as seen on the map above, are highly symbolical of the French domination. At best these names represent nothing to the local population; at worst, they have to live in streets named after their own colonizers. I believe however that the symbolical aspect of this strategy is secondary compared to the actual administrative stranglehold it implements. Naming something is already exercising a control over it. It allows a precise cartography of space that, to a certain extent, provides retroactively the conditions of a transcendental design like the one of new cities like Brasilia. The chronology that makes the plan precedes its urban materialization is significantly different from another one that makes the existence of the city precedes its cartography for all the reasons given above; yet, administrative cartography does allow to acquire a certain degree of control on a city that was not designed holistically. The tremendous effects of such designative administration of the city (each house has a number within a named street) can be seen in the French paratroopers’ methodical suppression (led by General Jacques Massu and Colonel Bigeard) of the FLN action during “the battle of Algiers.” In a war that was based on intelligence (obtained by the torture of Algerian prisoners), it is unimaginable to think the momentary success of the colonial army without its administrative nomination of houses and streets that could thus being identified discursively and spatially.

Whether through design or through administrative designation, a city’s authorities’ control establishes itself on the space and bodies on which it intends to operate. Architects are active in the design of cities, of course; yet, they also contribute in the process of ‘administrativization’ insofar that the representation medium they use is already ‘speaking the same language’ than the administrative one (see past article about “the architectural drawings as military and judiciary documents“). As always, this argument does not invite architects to cease all activity but, rather, to grow increasingly conscious of their own crucial responsibility within the organizational and structural schemes of relationships of power of a given city and society.