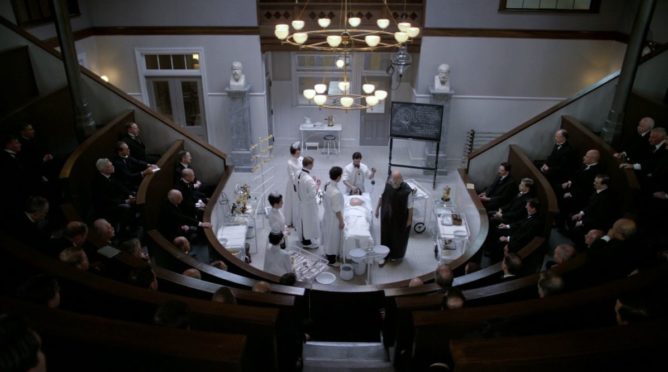 Still from The Knick by Steven Soderbergh (2014)

Léopold Lambert – Paris on March 26, 2015
If you enjoy articles of the blog, have a look at The Funambulist Magazine!

The Hospital as a Laboratory: The Production of Medical Knowledge Through the Bodies, originally written for L’Architecture d’Aujourd’hui 405 Therapeutic Architecture (March 2015)

In one of the lectures he gave in Rio de Janeiro in 1974, Michel Foucault describes how the paradigm of the hospital as an institution radically shifted in the 18th century. During the centuries preceding this change, the hospital was “a place where one comes to die,” or, to be more precise, an internment place where the poors comes to die and from where the diseases that killed them could escape. For Foucault, the 18th century is the time of all changes since all institutions (hospital, prison, government, education, etc.) start to base themselves on a mode of sovereignty no longer centered on the binary opposition of life and death, but, rather, on the management of life and its attributes. This new mode of sovereignty that is applied onto its subjects’ lives is what Foucault named “biopolitics.”

As institutions change, their architecture also does. The hospital thus becomes a place where one comes to be cared and cured and the architectural environment of bodies participates to such an endeavor. This place is now considered as “a mechanism to cure, and of which the pathological affects it causes must be corrected.[1]” This implies an hygienist architecture within which sick bodies can be easily administered.

One way to construct this text could have consisted in examining the hospital architecture as a spatial and administrative apparatus aiming at controlling the bodies: the hospital location in the city, the long corridors distributing the rooms allowing a fast and efficient movement of doctors and their interns, the identification of each body by bracelets and other explicit marks of their health, etc. However, this article will rather focus on the emergence of a new institution, the clinic. Foucault defines the latter as an hospital place, where a medical knowledge is produced and transmitted.[2]

Of course, such a production of knowledge on bodies often aims at helping them, if not ‘saving’ them. Nevertheless, the production of knowledge as it is effectuated in hospitals between the end of the 18th century and the beginning of the 20th century tends to dispossess the bodies in order to use them (dead or alive) as experimental instruments aiming at a sanctified scientific progress. Grégoire Chamayou’s book Vile Bodies[3] (see past article) thus examines the discursive, material and legal processes that attempts to legitimate such experimentations, in particular ­when they sacrifice the physical integrity of bodies in favor of the production of knowledge. These processes tend to depreciate [avilir] bodies in order to refuse to them the fundamental rights promised to bodies whose status can be said to be fully “human.” Such processes linking medicine and the absolute dispossession of bodies can be also found in the worst hours of the Nazi concentrational regime[4], as well as in colonialism. [5]

The recent television show, The Knick (Steven Soderbergh, 2014), although fictitious, offers the vision of a New York hospital in 1900, where technological and epistemological progress is accomplished each day by a crew of ambitious surgeons.[6] The architectural frame in which this progress is produced is not innocent: the surgical room, in particular, is an amphitheater where numerous experts sit to witness medical history in the making. The operated body itself is left to its anesthesia sleep to become only a living matter assemblage forming the experimental object of the surgical knowledge production.

We would be mistaken to believe that the hospital/clinic architecture only accompanies the institutional politics described by Foucault. The latter admittedly precedes from little their architectural materialization from a strict chronological standpoint; however, architecture never ceases to make them evolve in the organization of bodies in space it allows. Examining these politics without examining their architecture, that is the space conditioning their implementation, is thus senseless. The inverse is also true. The hospital is only an example among other institutions, all organizing the exercise of a political power on the bodies.

[1] Michel Foucault, “The Incorporation of the Hospital into Modern Technology,” in Stuart Elden and Jeremy Crampton (eds), Space, Knowledge and Power: Foucault and Geography, Ashgate, 2007.

[6] The Knick has been advised by medical historian Stanley Burns