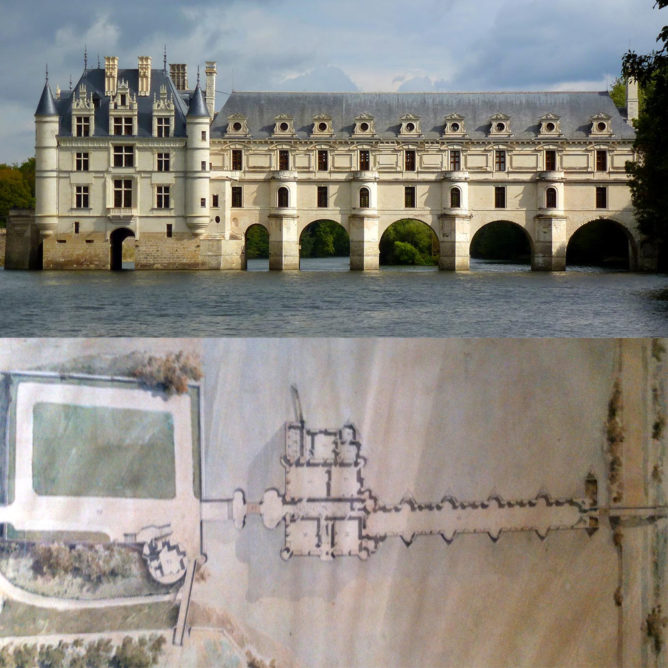 When visiting for the second time the Chateau de Chenonceau (Indre et Loire, France) last week, I could not help but notice an important aspect of the chateau’s history in the sum of information given by the brochure. Usually known as part of the “Chateaux de la Loire,” all built during the 16th century in the region of Tours, Chenonceau has the particularity of bridging the Cher river, which has been implementing the demarcation line between occupied and free France between July 1940 and November 1942. During this period, France was effectively separated into two parts (see map below), one occupied by the Nazis including the cities of Paris, Lille, Nantes, and Bordeaux, as well as the two third of the resources of the country, and the other called “free” whose government based in Vichy has been instrumental in their collaboration with the Nazis, including in the massive arrests of the Jewish population that was subsequently deported to the extermination camps. Despite this collaboration, the French resistance had less trouble organizing in the ‘Free Zone’ and people susceptible to be arrested by the Gestapo were able to find a relative shelter South of the demarcation line.

Of course the demarcation line was anything but porous and crossing it in whatever direction always proved difficult and perilous. The opportunity that Chenonceau, as a bridge-building, offered was therefore unique in this situation and it provided the access in both directions for refugees and members/equipment of the French resistance. The chateau had already served a substantially different function from its original one, during the First World War when it was used as an hospital; this contraband function during the Second World War certainly contrasts from the image we have of it nowadays.

As I often write, what is interesting about the notion of a “demarcation line” is the fact that such a ‘theoretical’ line can only be implemented if it acquires an oxymoronic thickness (see past article). In this case, the thickness of the line is materialized by the 50-meter width of the Cher river, a substantial thickness when one attempts to cross it clandestinely. The legal space of the thickness of the line being one of suspended rights for the body present in it (see past article about William Burroughs’s Interzone), anyone found crossing the river could be shot and killed. The Chateau bridging the thickness of the line thus provides a regime of visibility and material conditions facilitating its safe crossing, despite its narrowness that makes it easier to control its access.

The demarcation line was dissolved in March 1943 when the entire French territory was occupied by the German army, and in July 1944, the US Army attempted (and failed) to bomb Chenonceau as part of a global strategy to destroy bridges in order to disorganize the Nazis’ movements. As often with French monuments, only little allows to read them through the political weight they accumulated throughout the centuries; only the original effect seems to have been preserved, thus denying the determining role such buildings may have played and continue to play in history. Perhaps the entire function of the self-museum is obsolete and architecture would be able to tell more stories by simply continuing to see its function evolving. If Chenonceau was effectively a bridge we could cross rather than a museum of itself, we would understand better what has been at stake through this architectural typology.