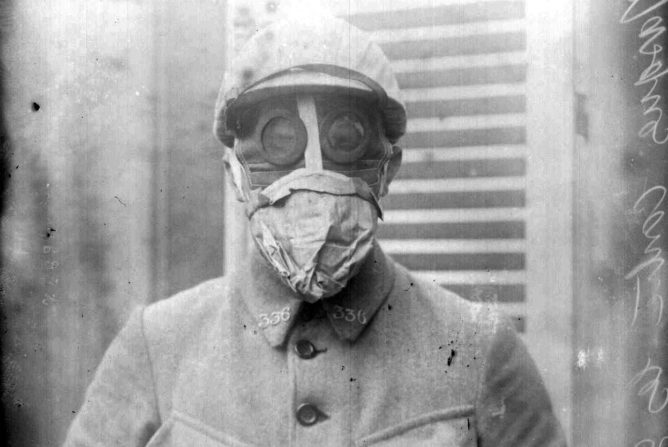 The following article is based on the reading of Peter Sloterdijk‘s Terror from the Air (Semiotext(e), 2007), as well as the inspiration provided on this blog by Andreas Philippopoulos-Mihalopoulos and Philippe Theophanidis in their respective Funambulist Papers, “The Funambulist Atmosphere“ (July 2012) and “Caught in the Cloud: The Biopolitics of Tear Gas Warfare” (August 2013), which both refer to Sloterdijk’s book. The latter introduces a short history of chemical terrorism and its implications for our perception of the atmosphere in which our bodies are embedded and interact. Although Sloterdijk insists on the 20th-century mutation of warfare from a symmetrical scheme to an asymmetrical one, which therefore develop terrorist activity, he however attributes the birth of “atmoterror” to the gas attacks created by the German army during the First World War, i.e. a war between two symmetrical armies. “Terror operates on a level beyond the naïve exchange of armed blows between regular troops; it involves replacing these classical forms of battle with assaults on the environmental conditions of the enemy’s life,” he writes. This definition can resonate with the context of the First World War, since both armies had reached such a degree of immobility in their tranches, that something like “life conditions” and the daily rhythm they imply, can apply to it.

The lightning-fast development of military breathing apparatuses (in the vernacular: linen gas masks) shows that troops were having to adapt to a situation in which human respiration was assuming a direct role in the events of war. (Peter Sloterdijk, Terror from the Air, trans. Amy Patton and Steve Corcoran, Los Angeles: Semiotext(e), 2009, 19.

Breathing constitutes in fact one of the conditions for life to perpetuate and, depending on the species, there are specific atmospheric conditions in which breathing is possible. What the atmoterror invents is a shift of paradigm in warfare, from the “traditional” attempt to affect violently the living organs of bodies — whether with a spire, a sword or a bomb — to the manufacturing of the atmospheric conditions in which the “enemy” perpetuate their life. In this matter, the attacks of September 11, 2001 acted in these two paradigms as the explosion and collapse of the World Trade Center towers was followed by a cloud of toxic dust that has extended the amount of victims through time. In the case of gas and other attacks targeted on the breathing conditions of these bodies, the latter found themselves in front of the choice of refusing to breath altogether or attempting to do so and thus being affected by the lethal gas. Of course, talking about a voluntary choice in this specific situation is absurd to a certain extent, since both lead to the same outcome, the death of the body; however, the fact is that this choice exists and can be observed through the attempt that a body makes to avoid breathing the gas — the example of tear gas is common as Philippe Theophanidis demonstrated — until, it “gives up” in a sort of vital reflex that lead to the ingestion of the gas in its lungs.

As Sloterdijk argues, this does not simply change the way wars are being fought, but more globally, it affects the very way we situates ourselves as bodies in the world: “The average human being-in-the-world […] was previous a Being-in-the-air; or more exactly a Being-in-the-breathable.” Just like the atmosphere of a gas attack, the atmosphere that constitutes the conditions in which (urban) bodies breath is also manufactured. Part of this manufacturing process involves in fact a toxic (see past article to see the definition I give of “toxic”) dimension that is often regulated to be maintained at a degree maintaining “livable conditions” of breathing. Life is however not an essence or a state, but a process and what is defined as “livable condition” often ignores the degree of toxicity of this condition when it does not immediately shows sign of affectation of the body. What we call pollution is a component of this toxicity and the effects are both individual and planetary. Global warning is therefore not a threat to the planet itself on the contrary of what well-known slogans such as “Save the Planet!” invite us to believe but, rather, that was is threaten are the global atmospheric conditions for life to perpetuate.

As Sloterdijk writes, “the air lost its innocence.” This is something that Frantz Fanon (quoted by Andreas Philippopoulos-Mihalopoulos) had argued before him (1959) through the phrase “combat breathing” that insisted that what was colonized by a nation like France in Algeria was not merely a territory and its resources, but rather the totality of the atmospheric conditions of a country. The resistance to such monopolizing control had therefore to be acting within the same domain: