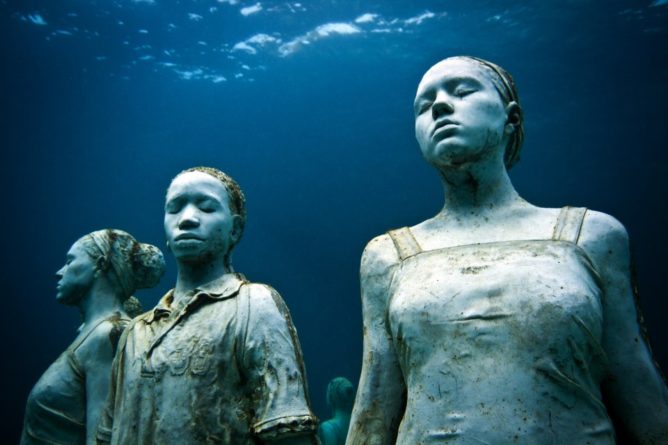 Léopold Lambert – Paris on December 30, 2014
If you enjoy articles of the blog, have a look at The Funambulist Magazine!

Discovering the underwater sculptures of Guyanese English artist Jason deCaires Taylor, in particular, Vicissitudes (2013) in the Caribbean Sea, made me want to write an extension to the two articles “The Slave Ship Is Architecture” (March 23, 2014), and “The Mediterranean Abyss” (July 1, 2014), about the notion of abyss in regards to the slave trade. Although deCaires Taylor himself does not explicitly claim the imaginary of the Atlantic cross by slave ships in his work, it seems impossible not to think about the two-million African bodies that died in the Atlantic Ocean during the three centuries of the slave trade, when we experience the expressive power of his underwater sculptures, in particular when they are situated in the Caribbean.

In the previous article about the slave ship, I had already quoted passages describing the ships’ atrocious hold by C.L.R. James in The Black Jacobins: Toussaint L’Ouverture and the San Domingo Revolution (Random House, 1989), as well as the abyss (gouffre) of the ocean by Édouard Glissant and Patrick Chamoiseau in L’intraitable beauté du monde (The Unassailable Beauty of the World, Galaade, 2009). Glissant links these two dimensions together by considering the slave ship’s hold as the first abyss (le premier gouffre) in The Poetic of Relation‘s (University of Michigan Press, 1997) first chapter “The Open Boat” (La barque ouverte):

What is terrifying partakes of the abyss, three times linked to the unknown. First, the time you fell into the belly of the boat. For, in your poetic vision, a boat has no belly; a boat does not swallow up, does not devour; a boat is steered by open skies. Yet, the belly of this boat dissolves you, precipitates you into a nonworld from which you cry out. This boat is a womb, a womb abyss. It generates the clamor of your protests; it also produces all the coming unanimity. Although you are not alone in this suffering, you share in the unknown with others whom you have yet to know. This boat is you womb, a matrix, and yet it expels you. This boat: pregnant with as many dead as living under sentence of death. (Édouard Glissant, Poetics of the Relation, trans. Betsy Wing, Ann Arbor: University of Michigan Press, 1997, 6.)

The transforming “belly/womb” of the boat is also described as such by Patrick Chamoiseau in his book dedicated to Aimé Césaire, Saint-John Perse, and Édouard Glissant, Les liaisons magnétiques (The Magnetic Liaisons) as the site of a radical and irreversible transformation from the African (wo)man to the American slave (my translation):

The abyss [gouffre] of the slave ship’s hold is not a mere space of torture or transitory dehumanization. It is a place of simultaneously real and symbolical destruction: a real one for the millions of trespassed bodies that have been thrown overboard; a symbolical one, and just as much destructive for the millions of survivors who will have to get reborn in the Caribbean and American plantations. Sunk in the bottom of the hold in conditions that negates humanity, the African body will see his vision of the world collapsing, as well as his gods’ efficiency and his convictions about the order of things and the divine. Nothing that used to constitute the content of his mind will find grasp to explain, admit and go beyond what will happen to him in this hellish belly. He will be symbolically, spiritually annihilated, to the point that the one who will get off the ship as miraculous survivor at the end of this immense travel will no longer be African, nor really human, but a stupefied matter [une matière sidérée], a zombie that planters will buy at vile price and will force to work day and night until death. (Patrick Chamoiseau, Césaire, Perse, Glissant: Les liaisons magnétiques, Paris: Éditions Philippe Rey, 2013, 50.)

The second abyss (gouffre) described by Glissant is the one of the bottom of the ocean in which two-million bodies are thrown. Many are already dead but some others are thrown overboard to lighten the boat in case of chase, or when being severely ill (as it was often the case), they threaten the rest of the ship’s health; there existed even insurances to reimburse such practice. In this case, the enslaved bodies are enchained together before being thrown into the ocean. Some others also prefer to jump overboard rather than continuing the atrocious trip and reaching the American coasts:

The next abyss was the depths of the sea. Whenever a fleet of ships gave chase to slave ships, it was easiest just to lighten the boat by throwing cargo overboard, weighing it down with balls and chains. These underwater signposts mark the course between the Gold Coast and the Leeward Islands. Navigating the green splendor of the sea – whether in melancholic transatlantic crossings or glorious regattas or traditional races of yoles and gommiers – still brings to mind, coming to light like seaweed, these lowest depths, these deeps, with their punctuation of scarcely corroded balls and chains. In actual fact the abyss is a tautology: the entire ocean, the entire sea gently collapsing in the end into the pleasures of sand, make one vast beginning, but a beginning whose time is marked by these balls and chains gone green. (Édouard Glissant, Poetics of the Relation, trans. Betsy Wing, Ann Arbor: University of Michigan Press, 1997, 6.)

In Les liaisons magnétiques, Chamoiseau choose to favor Glissant’s concept of Relation to Césaire’s concept of Négritude (elaborated in dialogue with Léopold Sédar Senghor and Léon Damas). He believes that the abyss created an indelible relation between enslaving and enslaved bodies, still poignant today in the Caribbeans and everywhere in the Americas:

Négritude ignored the effects of the abyss [gouffre], the effects of the major deconstruction that the African deportee will experience and that will transformed him into a stupefied matter [matière sidérée] forced to get reborn into hitherto unseen conditions. And the most surprising is that the abyss was not saving anyone. Of course, it deconstructed those who were kept in the bottom of the ship’s hold in unimaginable conditions (making of this era one of the worst crimes against humanity) but it will also touch the sailors, the captains and the European ship owners. The slave trade has been a demonic spiral into horror, torture, contempt, Gehenna, the negation of the human. The master and the slave found themselves unchained to the same dehumanization and will begin without knowing it, a restructuration to which none of them will escape. Essentially, the Négritude, despite its emancipatory and necessary virtues – and still necessary and emancipatory today – will ignore this phenomena that is so pregnant for us on a daily basis and that we barely begin to think: the Creolization process that opens to the Relation. (Patrick Chamoiseau, Césaire, Perse, Glissant: Les liaisons magnétiques, Paris: Éditions Philippe Rey, 2013, 51.)

When reading Glissant in a shallow manner, we could think of this concept of Relation as a candid wish for ‘friendly’ rapports between members of a humanity (nb: humanity conjugated in singular would be already reading Glissant wrongly). The Relation, instead, implies that all the humanities are tied together through the common parts of their respective imaginaries — another important concept by Glissant. When Chamoiseau writes that “the master and the slave found themselves unchained to the same dehumanization,” we obviously should not understand that both the master and the slave are both simultaneously guilty and victim of the process in which they were engaged together. The chains evoked here are the materialization of the extremely violent relation between these two humanities, which have been informing their two respective collective imaginaries and thus defined and continue to define (not necessarily exclusively but most certainly poignantly) their relation even after the end of this process. This is why when white police officers kill black bodies in the United States or Brazil with an apparent immunity, what is at stake is so much more than the (already intolerable) actual violence of the act itself: from the abyss, emerges again the “balls and chains” described by Glissant and Chamoiseau, present and poignant for generations in the Americas and Caribbean humanities. Time as such does not break chains. The Relation does not even aim at breaking the chains, but rather in changing their nature and unilateral violence. The first step in doing so however consists in recognizing that this profound tie between the humanities exist and that nothing of what concerns their common being can be thought and done outside of it.

As a post-scriptum, I recommend to listen the hip-hop account of Kunta Kine’s story through the music of Medine (in French).