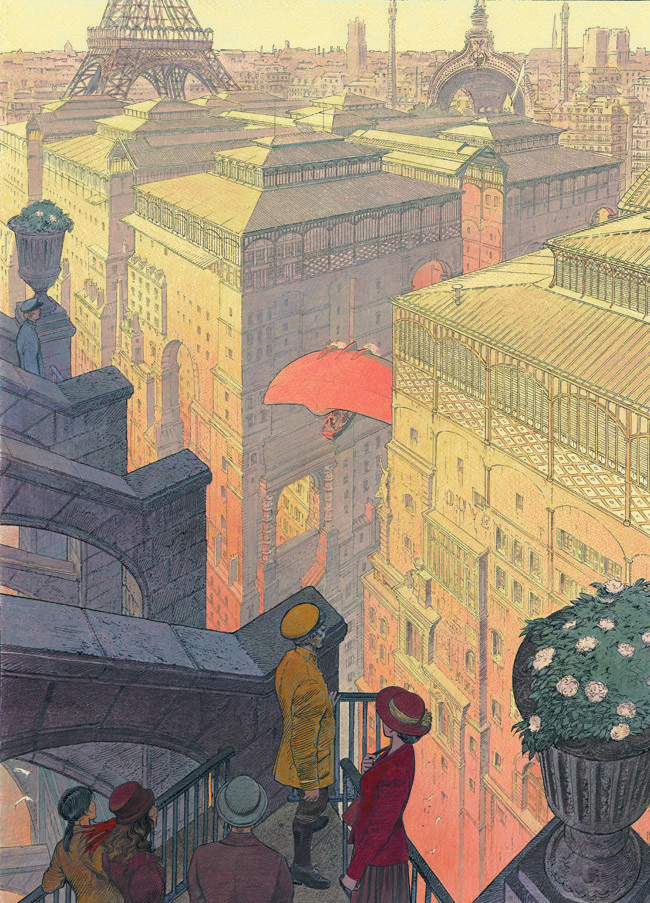 Léopold Lambert – Paris on February 5, 2015
If you enjoy articles of the blog, have a look at The Funambulist Magazine!

Originally a palimpsest was a parchment scraped numerous times to allow new layers of scriptures to be inscribed into its surface. The erasure was however never total, and archeologists consider such a document for its multiple layers of history gathered into one object. This notion of palimpsest can be perceived at the core of the vision proposed by François Schuiten and Benoit Peeters in their exhibition “Revoir Paris” at the Paris Cité de l’Architecture et du Patrimoine (November 20, 2014 – March 9, 2015). In it, the two graphic novelists mix speculative projects for Paris from the mid-19th century to our era, with their own literary work that proposes visions of an imaginary Paris.

One could think of a classic categorization of these visions from the past of the 19th century to the future of science fiction. The entire exhibition is however conjugated to the future anterior (future antérieur) tense, in other words, visions of the future coming from the past. This is how we can admire many 19thcentury etchings and newspaper articles depicting a delirious future where zeppelins would land on top of medieval buildings such as Notre Dame or the Saint Jacques Tower, where metropolitain trains would circulate on three-story bridges across the city, where entire boulevards would be covered by gigantic cast-iron roof structures, etc. The exhibition also features projects that were, in fact, built, such as the great Hausmannian transformations of the city, as well as the successive World Expos (1855, 1878, 1889, 1900) that took place in it. These projects, ‘despite’ their actualization, can be also considered as speculative in the radicalism they embodied for the time in which they were implemented.

The fictional visions proposed by Schuiten’s drawings and Peeters’s scenarios also belong to the future anterior. Their pages find their place in the middle of the speculative 19th-century etchings that we come close to suspect them to have produced some of the latter themselves for the purpose of this exhibition! The city, where their stories occur, is not a futuristic one in the progressive sense we usually associate to this notion. In this regard, their literature might be less considered to belong to the realms of science fiction than the ones of steampunk. Inspired by Mary Shelley, H.G. Wells, and Jules Verne – some of Schuiten’s drawings in the exhibitions are illustrations for Verne’s Paris in the 20th-Century – this fictional ‘subgenre’ uses the 19th-century pictorial vocabulary, in order to depict visions of a dated future, i.e. the future anterior.

Schuiten and Peeters’s visions of Paris are thus particularly in phase with drawings from the 19th-century, with which they develop a productive dialogue. However, such a dialogue is hard to find in relation to the other projects created in various eras of the 20th and 21st-centuries, and also exhibited in “Revoir Paris.” Although these documents and their chronology in the additional layer they add to the Parisian palimpsest, they do not seem to find their place within this exhibition, with the exception of the Pompidou Center irrupting in the narrative of the graphic novel L’étrange cas du docteur Abraham (The Stange Case of Doctor Abraham,1987). In comparison to the Schuiten and Peeters’s literary work, the various architectural projects presented, from Le Corbusier’s Plan Voisin (1925) to the recent consultation about the Greater Paris (2009), appear as institutional and technocratic. The advantage of fiction is that it proposes imaginaries that are not based on axioms of economic or functional efficiency. This is not to say that novelists’ vision should take over the politician, engineer, economist and architect’s jobs but, rather, that problems as large as the spatial exclusion of important parts of the Paris suburbs and its working-class population, or the harmful spreading of urban territory cannot be solved without a profoundly novel imagination, which fiction creators provide.

With their Cités obscures (Cities of the Fantastic in English) series of graphic novels, Schuiten and Peeters have been repeatedly envisioning cities challenging the absoluteness of urban designers’ schemes. Their stories dramatize a reality that technocrats do not seem to be able foreseeing. This reality is one of friction between the various layers of the urban palimpsest, as well as between architecture and the bodies living in them. This friction does not find a proper format in the architectural plans, engineering diagrams, or economic programs; it does, on the other hand, unfold its complexity in the fictitious work of novelists. Despite a few faults, the exhibition “Revoir Paris” is therefore useful in our wonderings of what the future of such a problematic city should look like. The future layers of the Parisian palimpsest will not be added without friction with the past ones, thus creating situations that will fortunately escape from the controlling power of the technocrats.

OTHER PIECES FROM THE EXHIBITION REVOIR PARIS ///