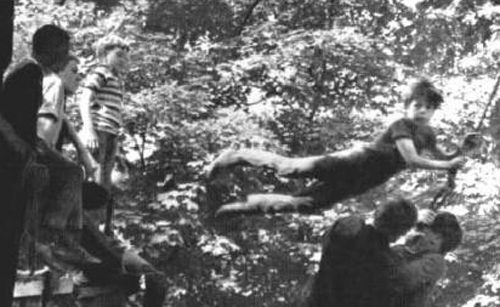 The third chapter of this guest writers essays series comes from a regular of The Funambulist, Martin Byrne (see previous articles 1, 2, 3 & 4 or see below the essay) whose projects always take their essence from the notions of decay, dirt and human emancipation. In the following essay, he explores the neologisms of kipple and gubble invented by Philip K. Dick in his literary work.

You find yourself walking through a long dusty corridor in a dank building sometime in the late afternoon.  The doors to nearly every room have long since fallen in, letting pale shafts of light mingle with dust and paper; assorted debris whirls about in lazy semi-circles as you pass quietly by.  There are no lights apart from the fading sun; there is no sound except for the slow pacing of your own feet, and the idle mixed thoughts that bounce from left to right in your head.  The farther you walk down the corridor, the more overwhelming your sense of isolation becomes.  Through each doorway you see rooms that have been long forgotten, weeds sprouting from moldy ephemera in the foreground, and a long view out of the broken floor to ceiling windows beyond.  Each frame you pass in steady syncopation offers a glimpse of what seems to be an encroaching desert.  Shifting piles of dust cover in fits and starts the remains of a world that you never found all that familiar.

How do you feel?

If you at all feel anxious, dirty, or alone, it might be wise for you to stop reading now.  ‘And why are you anxious about clothing? Consider well the lilies of the field, how they grow.’[2]  Or, I should say, in the Phillip K. Dick universe: ‘And why are you anxious about architecture? Consider the kipple of the world, how it spreads.’  For therein lies your salvation.

Also, before I continue, if you have not read Martian Time-Slip or Do Androids Dream of Electric Sheep? I suggest you stop whatever you’re doing and go read these novels.  Simultaneously, multiple times in a row.

Over the course of the varied and illuminated career of the illustrious Phillip K Dick, we follow the author and his hapless characters through a veritable labyrinth of shifting worlds, be they physical or mental, most in some stage of degradation and decrepitude, perhaps in some way similar to the scene described above.  Often within these worlds, Dick wields his God-given right to naming through the creation of words that might describe these decaying worlds and all their subtle majesty.  The two neologisms that seem to have the most potential are kipple and gubble, which vaguely signify physical shifts and mental shifts, respectively.  It is my contention that the author uses these terms with a secondary, perhaps unintentional, function within his narratives.  Dick’s complimentary concepts of kipple and gubble are both the devices and scenarios with which and in which his characters find solace and transcendence from ever more apathetic environments.  The characters exist within fundamentally unbalanced societies that they manage to escape by occupying the spaces and mentalities of kipple and gubble.

First, both kipple and gubble are functions that involve those members of society who are cast-off or forgotten.  Kipple is the domain of the chickenheads, antheads, other pea-brained humans, and fleeing androids, in Do Androids.  Gubble is the mental space of the autistic and the physical space of the Bleekman (Martians) in Martian Time-Slip.  These are people that have been deemed inherently incompatible with the rest of society, and yet we find that they either induce or are indicative of moments of transcendence for the protagonists.  Take for example the case of JR Isidore, the golden hearted chickenhead who first introduces us to kipple in Do Androids.  Living nearly in “the wastes,” JR finds himself almost entirely alone in an abandoned conapt where kipple encroaches from all sides.  This is also the place where he happens to find a live spider, eking out a living on Dick-knows-what.  Combine this awe-inspiring and unfathomably rare occurrence with Rick Deckard’s discovery of a ‘Toad (Bufonidae), all varieties…….E.’ (E for extinct) in the desert as he is contemplating suicide, and you have witnessed the strongest of many other subtle experiences these characters are allowed to have in a space that is dismissed by their society proper as being a wasteland.  The characters are delusional, the space they inhabit is alien, and yet they happen across transcendence.

And when dealing with transcendence, one cannot forget the figure of Wilbur Mercer (who was egregiously omitted from the film adaptation.)  Wilbur Mercer is the figure-head of the spiritual movement in the novel, and is accessed through an ‘empathy box.’  What we find intriguing about this motif is that it transports the users into what the society inherently fears: the desert, the wasteland, the place where kipple has taken over entirely.  It is within this space, the desert that they seek to be one with each other; to deactivate their robotic, mood-organ-dictated tendencies and feel free and human once more.  The irony that robots are being hunted for being too human is as palpable as ersatz sheep’s wool.

Beyond this, we enter the world of gubbish. Here we can begin to see the confluence of architecture and mental deviance, and how society aligns the two.  What is interesting in this analysis is that the persons involved with the architectural and mental deviations are children, but that is for another time.  In Martian Time-Slip, we have two children who occupy the two poles of a diagnostic society; one is the protagonist’s son, David, and the neighbors’ son, Manfred.  David is perfectly adjusted to being brought up on Mars, according to the colony’s conceptions of being well adjusted.  (His own mother claims that he was “trained to say no,” and that he was at the top of his school class.  Evidently the schooling system trains the children to be mere followers with no chance for variation or digression.)  Manfred, however is autistic and cannot become a ‘functioning member of society. Each boy is represented by a certain architecture, David, the public school, and Manfred, the desert.  The public school, as described in the thoughts of the protagonist:

“It was a battle, Jack realized between the composite psyche of the school and the individual psyches of the children, and the former held all the key cards.  A child who did not properly respond was assumed to be autistic – that is, oriented according to a subjective factor that took precedence over his sense of objective reality.  And that child wound up by being expelled from the school; he went, after that, to another school entirely, one designed to rehabilitate him: he went to Camp Ben-Gurion.  He could not be taught; he could only be dealt with as ill.”[3]

We learn that these two children are also indicative of the two types of people who populate the Martian colonies.  You are either a complete neurotic, which is accepted as normal and subsequently heavily medicated with all manner of phenobarbitals and Dexamye.  Or you are of a ‘schizoid temperament,’ and shipped off to a ‘camp’ in New Israel to be dealt with.  This is all brought to a head when the protagonist begins to experience schizophrenic episodes in concert with Manfred within the public school.  The two mentalities collide and cause Bohlen to   Bohlen’s world devolves in gubbish talk and gubbled environments, where bones burst through skin and buildings reach out to cut you, while Manfred’s world blossoms in the slow graceful movement of the Bleekman, with whom he can now miraculously converse telepathically.  Previously, Manfred was only (vaguely) aware of the humans he was surrounded by, in an environment that was consistently described as sharp and hostile.  And throughout all of this, Manfred intermittently experiences time-slips where he is forced to witness a potential future of his, trapped in a decaying retirement home while attached to an unholy array of machinery that keeps him alive in a state of deranged torture.

In Dick’s masterful climax, we find the characters confronting all of these mental deviations on sacred Bleekman ground in a shallow cave in the bleak Martian desert, affectionately known as Dirty Knobby.  Again, it is here in the inhospitable, entirely alien, patently dangerous desert, that Manfred’s consciousness crosses with the symbol of extreme neuroses, one Arnie Kott, after which Manfred is able to communicate and eventually live with the Bleekman permanently.  His visions of the future decaying building transform in a pleasant life in the desert with the Bleekman.  It was only through his schizoid temperament that he was able to escape a neurotic society and find solace in the desert.

“Perhaps, for the first time in his life, the boy was in a situation to which he might make an adjustment; he might, with the wild Bleekman, discern a style of living which was genuinely his and not a pallid, tormented reflection of the lives of those around him, beings who were innately different from him and whom he could never resemble, no matter how hard he tried.”

We should all be so lucky.  Folie à plusieurs, I suppose?

Now how do you feel?

[1] Fredercio Garcia Lorca, And Then, from Poem of the Deep Song

Other articles on the Funambulist about Martin Byrne’s work:
– The loss of architecture Or: how i learned to stop worrying and love the cyborg
– Another dance macabre
– Feral Garage
– Untitled Narrative #002