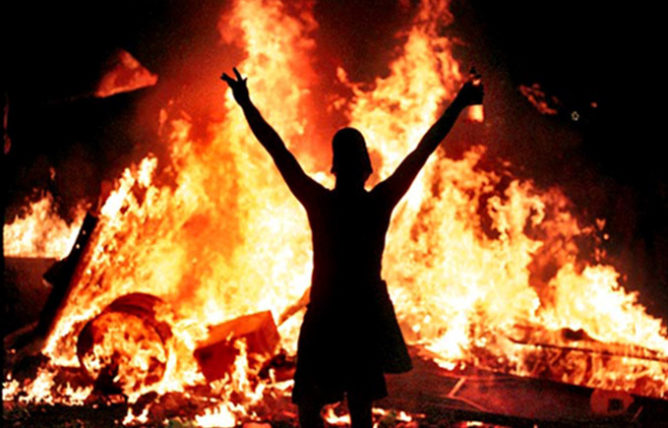 The second guest writer for this essay series is Nikolas Patsopoulos, Greek architect and who recently graduated from the post-professional Master in Pratt Institute with his thesis project Parallaxis, that I have been publishing earlier on. In this address to Francis Fukuyama, famous for his thesis that the neo-liberal capitalist system constitutes the “end of history”, Nikolaos mixes descriptions of the European revolts and Arab revolutions with ideas from authors like David Harvey, Antonio Negri or William Burroughs. The latter’s quote included in this text is n fascinating delirium about revolution that needs to be known.

The Funambulist Papers 02 /// My dear Francis…What kind of a phoenix will arise from these ashes?

“Don’t look at the mud in my feet with disgrace, it only means I am escaping. Don’t look at my ragged clothes they are only sign I am free.” [1]The recent developments from Tahrir Sqr. to the Indignados in Spain and from the London riots to Syntagma Square in Athens have made me think again of this quote. Only it is not mud anymore, in this fully “developed” corner of the world, it is yellowish tear gas dust and the holes in the clothes are rips from excessive police violence.

Someone might ask, why is it any different now? Protests and demonstrations have been occurring non-stop, well after the end of history had been declared in the beginning of the 90’s. Many of them even more violent and oppressive than the ones referred above.

The truth is that, up to this day, there always has been a counterbalance to this game of power; an upper limit existed that set the rules and the extents to what was allowed and what was considered excessive. At the very beginning there were the neighboring city-states and countries. After that, following the concurrent advancement of trade, the balancing fell on to the shoulders of other continents or even newly discovered faraway lands. Then it was time for the political opponent; the Soviet Union to play this role. Eric Hobsbawm has all too well explained all that and the ways that this works.

Now the crisis has reached a new singularity; it is cannibalizing itself. This is the strategic difference that we can witness today. We don’t have to be very close followers of Professor Harvey’s work to realize that the system in which we are living is closing in on its limits. Human rights are being nullified in a heartbeat and market shares have started to directly orchestrate the tune of the music that countries will dance, indifferent to the repercussions of their citizens.

“Even though freedom can run against itself, lines of flight will still open up in this ambivalence; Suffering can be productive, but it can never be revolutionary; Only excess, overflow and power can be revolutionary..”[2]

The de-socialization of the analog life brought us remote relationships through digital social networking. This remoteness enhanced the dissolution between the social strata and the political function of the system. Shortly after the beginning of the 21st century, the economic market discovered a new fueling system to function upon; debt. In essence the economy of the market became economy of debt and with it debtocracy became a distorted version of democracy.  This is the aftermath in which we are called to live and operate today.

It’s left to us to decide if we will try to understand and smooth out the bumpy ride of dissolution or fight for its complete overtaking. Crises have happened before and they might as well happen again. After all, they are a crucial ingredient in the capitalist recipe. All of the previous systemic crises in the “long 19th century” and “short 20th century” resulted in a superficial mixing of cards, but where always saved by the balancing stunts that we have already mentioned. The totally globalised version of our world can bring a new era not only to the extent of the active crisis, but also to the solution that will resolve it. Problems cannot longer hide under the rug and be forgotten; nations and populations have to deal with the actual solutions, this time in a local and a global scale simultaneously.

But there is an even more alarming and interesting characteristic associated with this concurrent crisis that this essay wants to involve itself with; the complete lack of obvious solutions.. In this era of multiplicities and conjoining disciplines, politics has long lagged behind and maybe it will be timely for it to finally catch up. It is generally accepted that time is and will always be of the essence in these matters , but the same time that is quickly running out, can now acquire attributes of historical essence.

We can safely assume by now, that we can recognize most of our ghosts and that we do want to discard our self proclaimed heroes. We really can be the ones we have been waiting for, as Zizek has argued.  Single or multi headed directive monsters face in terror the solitude of abandonment. The left has lived with these symptoms for at least 30 years and it yet has not produced a defined solution. So might I safely assume that since there is no solution, might there be no problem?

“Despite disparate aims and personnel of its constituent members, the underground is agreed on basic objectives. We intend to march on the police machine everywhere. We intend to destroy the police machine and all its records. We intend to destroy all dogmatic verbal systems. The family unit and its cancerous expansion into tribes, countries, nations, we will eradicate at its vegetable roots. We don’t want to hear any more family talk, mother talk, father talk, cop talk, priest talk, country talk or party talk. To put it country simple, we have heard enough bullshit. […]Rotation and exchange is a keystone of the underground. I am bringing them modern weapons: laser guns, infrasound installations, Deadly Orgone Radiation. […] We will be ready to strike in their cities and to resist in the territories we now hold. Meanwhile we watch and train and wait.

I have a thousand faces and a thousand names. I am nobody I am everybody. I am me I am you. I am here there forward back in out. I stay everywhere I stay nowhere. I stay present I stay absent.”[4]

Where does architecture fit in all this?

As B. Tshumi once stated, architecture can never be self referential. It has to mirror what is going on around it, in one way or another. As an example of this situation one can easily refer to the early 20’s in the still forming Soviet Union and its social experimenting. The groups of ASNOVA, OSA and the rest of their constituents set off for a magic journey that had a completely unpredictable outcome. They did not know what they wanted, they only knew what they were moving away from; as Moisei Ginsburg with utter confident stated in his response-letter to Le Corbusier.

In that exact historic time and space, architecture came face to face with problems that were not even conceived until then. The profit margin dissipated, leaving room for clear thoughts and liberated dialectic among the lucky participants. A hand full of them broke off even further away and started calling for a completely different form of human settlement. Two of them paid their ideology with their lives… Can we really imagine an architect today standing firm between his spatial and political ideas and the threat of losing his life?

“Everything under heaven is in utter chaos; the situation is excellent…” Mao Zedong

Nobody can really presuppose how the architectural world will deal with the concurrent situation. Some might have thought that the greening of everything possible could be the next best thing, a trend even, for the profession and the academia. Still, environmental consciousness is only one of the things that we will have to start thinking clearly about. In reality, the situations that we might be called to face in the near future might be as a grave as they can get. A whole structure set up on profit margins and carrier expectations will most probably come crumbling down. What will remain of it is a metaphysical mystery of sorts…

The above comment by Manuel De Landa might be the finalizing point that we are aiming for. In short, sometimes not having the answer can be equally good and creative. The most important thing is to recognize the situation and allow for the timely gap-filing whenever possible.

The reason why this essay deliberately avoids coming into certain conclusions is exactly the very essence of it. Every reader is called to reach his own conclusions and thoughts out of the posed problems and opportunities. We have learned to live with multiplicities and gaps. Our newly defined digital world showed us the way to make the best out of it. It is high time to let go and maybe understand that although we have managed to reach a very high technical level as a civilization, not all can be mastered by us.

In an attempt to answer J. Baudrillard’s entitling question, not only nobody knows the kind of phoenix but in all probability nobody wants to know either. What’s the real issue here is, what is this kind certainly not going to be…