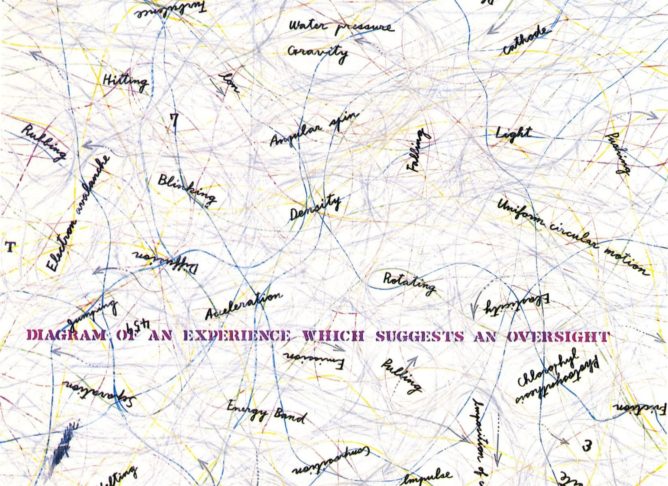 Today’s guest writer is Russel Hughes who recently finished his dissertation, DIY Biopolitics: The Deregulated Self at the RMIT (Melbourne) and, while waiting for its publication, gives us one of its chapter. In the latter, he introduces a philosophical interpretation of the work of artists/poets/philosophers/architects Arakawa and Madeline Gins. Russel starts his analysis from the paintings created in the 1960’s and 1970’s in order to shift later to their architectural sequels.

Arakawa and Gins’ Reversible Destiny has been the subjects of many of the articles published on the funambulist for the last two years (and there is at least one more coming up); I therefore decided to dedicate to it a category by itself so that it could be explored by anybody curious about it in an interesting way through the archives of the blog: CATEGORY ARAKAWA/GINS

The Funambulist Papers 35 /// DIY Biopolitics: The Deregulated Self (excerpt of the upcoming book)

Arakawa’s early paintings (1961-73) (many of which were produced with Gins though she took no authorial credit for them) represent what appear to be semi finished sketches that sometimes look like technical drawings against backgrounds of white and varying shades of brown. The purpose of these two dimensional representations is to signify ‘blankness’ as a “neutral positing” (Arakawa and Gins, 1997: 36), in the sense that blank is a ‘holding open’ of the compulsion toward the standard artistic practice of conceptual and cognitive colonisation toward a predetermined end. As they state: “it is what is there but undifferentiated, so it is nothing … It is what fills emptiness” (ibid.: 36). Another way of understanding blank is through the French blanc, meaning white, which is of course the congealment of all the colors in the spectrum (as opposed to black, the absence of color). In this sense, blank (or blanc) is overabundance, the reservoir of potentiality from which anything can come forth. The concept of blank draws our attention to the multiple points of interpretation contained within open endedness, as opposed to the definitive teleological fixity much (not all) creative practice strives for and is habitually accustomed to. The visual argument in these artworks is that painting as an activity abstracts from nature, narrowing down and essentialising experience. Abstract thought is the frame that apprehends the open endedness of meaning, defining and positioning a text in exclusive, unequivocal terms. In this respect much of Arakawa’s early work remains untitled (acting as the actual title of the work), which itself is an act of resistance to the etymological determinism that comes with labels that posit in explicit terms what it is we are meant to understand and experience from artistic productions.

Arakawa’s paintings function as possibilities for reconstruction, involving “not so much the play of sensibilities as they do the experience of reflection” (Adcock, 2003: 204). In this way Arakawa (and Gins) want to problematise how we “speak and enquire about what we hold as knowledge, especially visual knowledge” (ibid.: 207). The blankness that is produced in these works is not so much about nothing or non-sense, as it is about the ‘charged potentiality’ that becomes apparent when our intentions of the way we read texts are questioned, confused and disorientated. A central key to Arakawa’s work, (and the subsequent architectural productions that operate along similar lines), is the frustration of the expectation of predetermination in the consumption of texts, which forces into play a series of openings between the text and our cognition of it. In this sense blank operates as a middle way or entredeaux, an opening of the circular loop between experience and reflection. Crucially, Arakawa (and Gins) paintings do not so much conflate painting and experience, or operate in the gap between them, as respond to their dynamic reciprocity.

As a device for short-circuiting cognitive and conceptual processes, Arakawa (and Gins) use of blankness is the platform from which the possibility for cognitive and conceptual liberation is launched. But as you may have noted in this last sentence, these two dimensional representations are specific to a liberation predicated on visual experience alone. Though Arakawa (and Gins) larger canvases do engage the body to a degree (some experience a feeling of vertigo standing before the larger canvasses), it is from this need to concentrate on the body, to target its receptive centers in their entirety (as the ‘bottom up’ spontaneously emergent cognitive hypothesis, the theory that transformative cognitive potential is accessed by targeting the body’s sensorium in its entirety, dictates), that the two dimensional artist and his poetic partner turn to architecture.

By translating these principles from two to three dimensions, Arakawa and Gins’ theoretical trajectory works toward a more comprehensive engagement of the cognised body within a tactile, tangibly embedded, ‘sensorially’ charged space. In this sense, architecture that is what they call ‘tactically posed’ architecture challenges, interrogates, frustrates and disrupts the predetermined, habitual, sedentary practices of modern living, destabilising and de-habituating the teleologically driven end points that govern it.

To illustrate this point architecturally a good place to start is to consider what is actually wrong with normative architectural practice. It is argued by several theorists (Bergson, Poincaré, Rosenberg), that human cognitive freedom became lost with the imposition of a Newtonian grid of time and space onto experience (Rosenberg, 2003: 174). This occurred with the appearance of technologies of clock time and calculus utilised by governments to regulate and control human and social behavior. Such a condition extends to the domain of architecture, in particular contemporary architecture, which Arakawa and Gins argue ignores much of its primary function, to be first and foremost at the service of the body. Contemporary architecture is “insufficiently procedural” (2002: 54), that is, it is ‘comfort’ architecture that presupposes identity and fails to ask much of the body (the embodied mind). Still laden with the latent architectural heritage of buildings as monuments or mausoleums, as ‘tombs for the dead’, much of popular contemporary architecture abstracts, and thus detracts, from the open-ended potential claimed in the embodied mind hypothesis, once again narrowing down and essentialising experience. Philosopher Joel Robinson makes a poignant observation of contemporary architectural practice in this regard:

Investing spaces with architectural procedures for asking how we constitute ourselves in the world, Arakawa and Gins’ architecture aims to empower us to stretch the limits of sensorial plasticity. Their work thus stands in opposition to smart homes that, as second skins that are becoming increasingly self-regulating and interactive, make their user inhabitants proportionately dumber. It also stands in contrast to those coffins (as Gibson calls them in Neuromancer) that numb the senses to everyday dwelling, and against the celebration of virtual architectures and obsolescent bodies … theirs is a tool for reconfiguring … reforming … and reengineering (Robinson, 2005: 38).

The smart home, through the satiation of pleasure and comfort, through solving every dimension of experience to create a problem-less mode of living, kneads and coaxes the user inhabitant into a numbed state, an architecture that Jean Baudrillard in a different context (consumer society) calls an environment of “seduction” and sedation that domesticates and sublimates its user inhabitants into becoming just another object for consumption (1988). In this way, standard architectural practice is not dissimilar to the model of “learned helplessness” as it is understood in behavioral psychology (Seligman, 1975). Arakawa and Gins’ surrounds work as the antithesis to this kind of architectural logic. Through the deployment of procedural tools that confuse, disorientate and question the body’s relationship to its surrounds, their spaces produce effects that are tentative and highly uncertain, inducing a sense of open ended possibility which works to resist all compulsions toward habit, routine, acceptance, inevitability, and any other kind of corporeal or conceptual predetermination.

Drawing on metaphorical descriptions of the way the architecture can bring a greater intimacy between humans and their environment, Arakawa and Gins employ the example of the snail to illustrate the way architecture can increase its proximity to the body, so that to wear it is like dressing oneself in a second, third, fourth and counting skin. A more accessible way of understanding the nature of this intimate structural coupling between an organism and its environment, is through Andy Clarke’s description of the fluid dynamics of certain fish. In his book Being There: Putting Brain, Body and World Together Again (1998),Clarke uses the ‘Tale of the Tuna’ to describe the way select fish appear to defy the laws of physics in their capacity for propulsion and maneuverability. The argument begins with the illogic that dolphins are simply not strong enough to propel themselves at the speeds to which they do. According to the Triantafyllou brothers the extraordinary swimming efficiency of certain fishes is due to an “evolved capacity to exploit and create additional forces of kinetic energy in the watery environment. Such fishes, it seems, exploit aquatic swirls, eddies, vortices and pressure gradients, in turn using them to support speedy and agile behavior” (1998: 112).

Here the organism in question has such a sophisticated evolutionary intimacy with the environment that produces it that its capacity for swimming defies the ‘laws’ of its perceived biomechanical limitation. This talent is predicated on its tentative ‘at the ready’ monitoring and massaging of the fluid dynamics at any given point in time, that changes with each distribution of time and space in accordance with every new set of parameters that define its situation. Responding to minute changes as they happen, summoning all it can in the cognising of each specific point in time without the encumbering ‘guidance’ of teleologically determined end points (the abstracted ‘human’ goals of reflection severed from experience), is what Arakawa and Gins are suggesting we do via the construction of architectural procedures tailored specifically to such biomechanical ‘law’ defying possibilities inherent within the dormant cognitive potentials of the body.

This raises the essential point to be made with respect to the heuristic trajectory of Arakawa and Gins and the foundational assumptions of the discipline of cognitive science. In the opening lines of Architectural Body, Gins and Arakawa state the need to recognise ourselves (and the species from which we emanate) as “puzzle creatures”:

Who or what are we as this species? Puzzle creatures to ourselves, we are visitations of inexplicability … We must surely go to all possible lengths to find out what we exist in regard to (Gins and Arakawa, 2002: xii).

Contrary to the common practice of solving in concrete terms this ontological mystery, Arakawa and Gins do not seek to redress this with the positing of an abstract scheme or knowledge with which to overcome and ‘know’ it; rather, it is the very uncertainty of our being that Arakawa and Gins embrace as the definitive guiding principle for an architecture that must avoid stasis and the teleological determinisms that encumber it, if it is to engage experience as it happens and yield the dynamic cognitive potential contained therein. Resonant with the findings of cybernetic information theory, principally the research of Norbert Weiner illustrated in Chapters 1 and 4, Arakawa and Gins’ architectural procedures, predicated as they are on the notion that the species is a “puzzle creature” to itself, recasts their vision for the species from this contradictory ‘platform’ of uncertainty. For cognitive science practitioners, Arakawa and Gins’ architectural and heuristic practice is thus vital if not indispensable to the ability to renegotiate and recast cognitive bodies toward the transformative potentials contained within the emergent cognitive hypothesis.