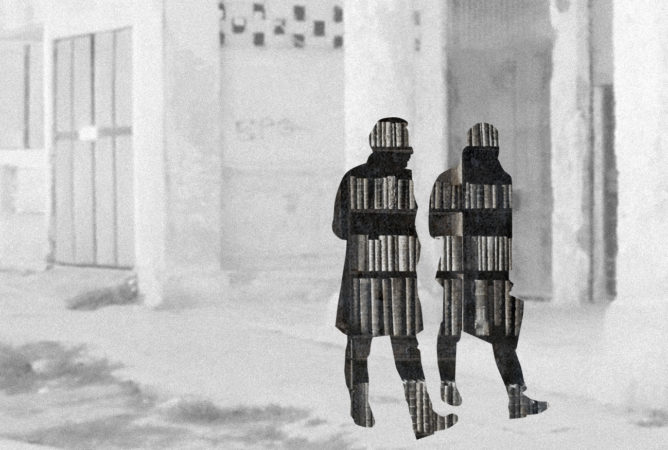 Today’s guest writer’s essay, Open Stacks, is the story of those clandestine informal Cuban libraries that were created as a form of resistance against the governmental censorship of what officially constituted as “ideological diversions”. Liduam Pong, who lived her entire childhood in Havana, gives us a personal approach to describe those libraries at the back of a house, or at the bottom of a bag.  In her opinion, these small and informal spaces of knowledge diffusion are more entitled to be called Public Libraries than the official institutions usually carrying this name.

No need for a very strong organized movement here, the “open stacks” are part of micro-networks developing small yet crucial forms of resistance against censorship and its suppression. Censorship is used here as a tool of constraint of the imaginary, a paranoid reaction fearing the choice of the multitude if it was to see other possible worlds. Liduam and I started to talk about the power of books (power emphasized paradoxically by its censorship) after the small presentation I did (see previous article) around this theme. The following text is her investigative work to find the tracks of stories and actors that participated to the micro-strategies of counter-censorship.

The banned book was carefully wrapped in Canson gray paper, with a subtle relief of horizontal lines. Because it was surrounded by a few decoy books published in the DDR, and tucked away in a small shelf in my parents’ room, itself tucked away in the mezzanine level of a minuscule apartment in Havana, it was easy to miss it entirely, unless you were a twelve-year-old with literary ambitions.  I knew there was something special about this particular book because it was not downstairs with the others, because it looked and smelled foreign, and because my mother had told me I was not allowed to read it. All I knew about it was its mysterious title: 1984. I liked to imagine that in its forbidden pages one could find ancient prophecies for our city for that year, which had just passed not that long ago, or maybe for the entire island, even perhaps the universe. One morning, when I had finally mustered the courage to steal it from its spot, I was disappointed to discover that it had disappeared. From that moment on, whenever we would visit anyone’s house, I made a habit of inspecting their personal libraries looking for these mysterious annuals –secretly hoping for 2000, and a glimpse into the distant future– but I never found any such books.

As I grew older, I understood that there was an entire catalogue of books that I was never to casually find on display in people’s bookshelves, or at the depleted stacks of the National Library, or in any other public library in Cuba. At around that same time, I also understood that “the terrible circumstance of water in every direction”[1] confirmed the clear separation between inside and outside, the island and the world, cubano and extranjero[2], and that there seemed to be an expansive world abroad where certain books, which were considered “ideological diversions” by our leaders, were allowed to be published and distributed more or less freely. Unless there was someone from that world willing to stash banned books in their luggage and bring them to our side of the buffer zone, there was an entire universe of literature that I was never going to read.

Of course, books are small objects and people are creative. Just like the black market thrived in Havana for many things that were otherwise unavailable, foreign books, magazines and videos were passed from hand to hand, “below the radar”. These items would, at first, enrich the privileged private stacks of people with friends abroad who had some special way of bringing them into the country, such as a contact in a foreign embassy. From there, they would make the rounds of the intellectual circles, eventually reaching the hands of anyone with enough curiosity and guts to risk reading a banned book. Since all public libraries were unanimous in their embrace of the official point of view, and watchfully reflected such ideology in their open stack collections, the concept of the “public” library was gradually dislodged from the physical institution, with its corresponding building, to take on a more portable format. Through informal lending and copying, the new “public” libraries of Havana began to be carried all around the city inside backpacks, purses and briefcases, with the more problematic titles wrapped with the cover of an official magazine as way of disguise. Even though there were no catalogues, people knew what books were circulating by word of mouth.

Once the public library becomes an idea, a group of books inside a bag, the rules of the “circulation desk” become, literally, those of circulation around the city, a circulation that falls under the scope of surveillance of the neighborhood vigilantes organized by the Revolution Defense Committees (CDRs, which have chapters on every city block), the Revolutionary Police, and the State Security. But once they are free from the confines of the bookshelf, these books manage to disseminate like pollen, carried diligently by the bike-riding citizenry, to be ultimately enjoyed and discussed away from public view.

In February of 1998, in a speech during the International Book Fair in Havana, Fidel Castro declared that “there [were] no banned books in Cuba, just no money to buy them[3]”. Upon hearing such an interesting remark, a couple from the province of Las Tunas, Berta del Carmen Mexidor and her husband Dr. Ramón Humberto Colás, decided to put such statement to the test by opening their personal library to anyone interested in reading books and magazines that could be considered “enemy propaganda” by the state. With this, they began the Independent Library Project[4], which spread all around the island, with numerous new independent libraries opening in the homes of people willing to take the risk of being accused of being political dissidents. These libraries, often named after prominent Cuban scholars, scientists or writers, occupied the most unexpected spaces inside already crammed houses and apartments, and soon claimed the attention of international organizations, many of which began to send donations of books and other materials. By 2009[5], there were around 200 of these libraries all over Cuba. It should be noted that many of these independent librarians have been subjected to harassment, persecution, confiscation of materials, and in some cases, long prison terms. Mexidor and Colás, who lost their jobs and their home as a consequence of their activities, had to leave Cuba in 2002.

The Independent Library Project marked a return to a more or less formal space (in the sense of a postal address) for borrowing unsanctioned books, even if these new spaces were often limited to a corner in someone’s living room. This return to the shelf allowed for a better organization of effort and materials, including the donation of books and magazines, which would come from many different sources, including neighbors, relatives abroad, and foreign embassies who were interested in these cultural spaces. It also made independent librarians easy targets of attack by the “official” librarians, who accused them of treason, of undermining the Revolution and of being financed by foreign interests. The origin of the books, however, should not matter as much as the fact that there is even a need for these underground libraries to exist.

The fact remains that, in response to official censorship, the institution of the “public” library in Cuba moved away from the control of the state, and instead aggregated around people’s desire to disseminate and pursue information, whether in the form of unorganized lending from hand to hand, or in the form of independent libraries run by private citizens . The growth of these informal libraries continues to take place in a fluid manner that clashes with the rigidity of the state and provides the public with the pleasure of reading and the benefits of critical thinking. These libraries, while lacking the traditional prestige of a dedicated building, or the backing of official institutions like universities or governments, provide a much needed alternative to the official discourse. At least in these independent spaces, banned books don’t have to be wrapped in paper anymore.