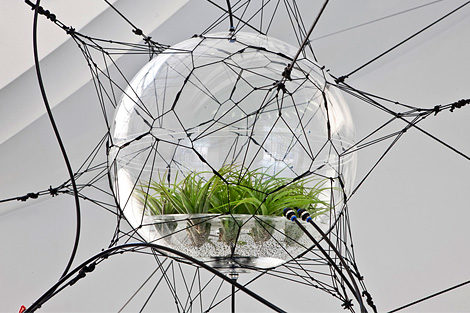 Today’s guest writer essay is written by Andreas Philippopoulos-Mihalopoulos, co-director of the The Westminster International Law & Theory Centre in London. Andreas was kind enough to center his text on the figure of the Funambulist who incarnates both the body that experiences and creates the atmosphere (s)he is in. He uses Tomas Saraceno‘s sculptures as a materialization of this atmosphere. Materiality is indeed important here, as Andreas points out that atmospheres are too often perceived within a phenomenological interpretation rather than a materialist one. His essay is therefore an attempt to describe the epidermic reaction a body experiences from the atmosphere which prevents any form of contingency.

Funambulist bodies move about, careful not to fall into each other, mindful of the drop below, pulsating along the tension of the ropes beneath. Bodies construct atmosphere on the arch of their movement. Atmosphere constructs bodies between its folds. On the one hand, atmosphere of tension or rest, engineered or emergent, promised or promising. On the other, bodies of flesh as well as discourse, materialities that keep on fluctuating between the abstract and the concrete. Bodies of human tissue, of technology, of animality, vegetable bodies whose roots extend to my feet. Where am I? The installations of Tomas Saraceno can help as a visual aid for what I mean by atmosphere. Constellations of tension, bubbles that burst with an excess of lines, water, vegetation, animality, humanity, space of air defined by the ethereal claustrophobia of openness, trammelled by lines on which the funambulists of the world circulate. How to get away from the lines, if not on other lines? And then, small deaths along the way: like the realisation that the line is one, and however far you walk, you cannot escape it.

Atmosphere is currently trending in architecture. Peter Sloterdijk’s work on air, air conditioning and atmoterror (2009) has revived the interest in atmosphere by extending it into critical geography, sociology, philosophy, ecology, and so on. Likewise, the work of people like Gernot Böhme (1995) and Hermann Schmitz (1969) on atmospheres is increasingly becoming familiar to the Anglophone world. However, most attempts at understanding atmosphere are phenomenological. Böhme’s rather well known definition of atmosphere is no exception: “the common reality of the perceiver and the perceived” (1995: 34). His attempt at leaving behind the ocularcentrism of architecture urges him to take into consideration moods and emotions. So far so good, but these remain phenomenological: they presuppose a (human) subject and an object, thus resuscitating the Cartesian distinction phenomenology has been trying to distance itself from, as well as significantly the various racial, gender, and sexual perspectives that have the potential of radically affecting the atmosphere (Löw, 2008). Schmitz’s definitional attempt is equally entangled in similar themes. According to him (1995: 302), the affected body is entirely taken over by the atmosphere, becomes totally embedded in it. While this might be the case eventually, it is important I think to maintain the relevance of the skin, the unity of difference between the body and the world, the ‘monoface surface’ as Lyotard puts it, which without mediating or indeed differentiating, holds together the body and the world. This is because by positing a difference between body and world and further by allowing one to flood completely the other, one ends up with re-mystifying atmospheres. Ben Anderson’s (2009: 78) suggestion of atmospheres as “a class of experience that occur before and alongside the formation of subjectivity, across human and non-human materialities, and in between subject and object distinctions” redresses several important problems, but remains an in-between of categories that is imperative to overcome, which, furthermore, is thought of as an experience rather than what I would like to bring forth, namely a floating ontology of excess.

Rather, I suggest that atmosphere is the excess of affect that holds bodies together. What sounds like a result of con-corporeality, however, must be quickly qualified by the asphyxiating circularity whose epistemology reflects its ontology: atmosphere is what emerges when bodies are held together. Simultaneously cause and effect, or let’s give up on these categories altogether for a second and allow atmosphere to take place in its full excess. Faithful in its etymology as a sphere of steam, atmosphere encircles the body at a high velocity, just as it encircles any epistemological position from which it can be observed, understood, critiqued. It is Saraceno’s rope, one unending line of division and interruption and connection and construction and locking up and opening up. Atmosphere is air, breath, perspiration, humidity, rot, stench. It is here, always here and without temporality. It is what is, in exclusion of every other contingency. It is the absolute solidification of ontology, typically formed by thin air and sweet sounds, and the theological blind spot of epistemology, finally covering the globe. Atmosphere is one, every time once. It is hotel room, concert hall, piazza, demolition, flood, café, boredom, ideology.

Each atmospheric rope is a corridor of compulsion. All bodies are funambulist, there is no choice. The question is, which corridor to resist, how to stop while on one and follow another. At best of times, the question might also be whether this is really all there is. But what happens when Truman in his very own show touches the sky? Not much, since atmosphere has preceded him: the body of his boat pierced the body of the sky, a rope extended, a line continued. So what? The end of the film saves the viewer from the tedious repetition of the inside, this time performed outside. The line connecting them revealed the absence of difference between them. Or indeed the paper-thin quality of that ultimate dreamscape, the sky. But all bodies are funambulist, treading carefully on angels’ arms, hoping to reach some sort of godly hand. Better carry on walking.

Where is the locus of choice? Behind the hanging drape with the dictator’s face ushering the grand square in an atmosphere of conviction? Underneath the candle, “cosily” lit in a Scandinavian café, a place to hug up and consume? On the bottom shelf of the tinned food section at the supermarket, the shelf they do not want you to notice? These are easy tricks and one can learn to apply them. The point is that not all bodies are equal. Some slide effortlessly along, assuming poses of always-already presence, while others hang from the lines with their fingernails. Affects exuded are always affects affected. You can easily bring me round to your atmospheric acrobatics, not because you force me but because you convince me. I partake of an atmosphere means that your affect becomes the lake of slow rotting honey in which I find myself willingly stuck, inanely smiling. This is the excessive nature of atmosphere: always here yet beyond phenomenological approaches.

The breath of the world is shared amongst the breathers. But each breather stands aside, circulating air between her and the world in a private communion: “air disrespects borders, yet at the same time is constituted through difference” (Choy, 2011: 165). This is not always a peaceful process. Breathing is a fight for space, space inside the breathing cavities and space outside amidst the breathing world, indeed a fight for strength and elemental survival – what Franz Fanon aptly calls “combat breathing” (1970: 50). Air’s aggregate nature forces one into a distinction that generates singularity. The same applies to space as a whole, earth and water, cities and concert halls, supermarkets and carton boxes. In the whirls of the one atmosphere, a body emplaces itself with the normative force of desire. This is, properly speaking, the “dissection [découpage] into comparable and countable parts” (Lyotard, 1993: 44) of the skin of the world, the effect that capital has on affect, law has on territory, and anticipation of the future has on the earth. This is the logos of spatial striation (Deleuze and Guattari, 1986), the rationale and the word that chops up territories and properties, exploding the atmosphere and making it plural.

Atmosphere therefore might be one, but can implode along its lines. The multiplicity of internal distinctions within an atmosphere is at work. To go against an atmosphere is always an internal move, causing the atmosphere to speed up its becoming and move to a different configuration of elements. Flocks of affects group bodies together one side of the line, pushing the conflict-inducing body to the other. Or perhaps move alongside the trouble-maker-turned-hero, pushing the anomic to the other side of the distinction together with the employer/father/authority. Or even have the atmosphere serrated by multiple lines and multiple conflicts, fractions of packs pushing their territory further into each other’s body. A conflict of atmosphere is still a singular affair, since at every point and at any given space there will always be only one atmosphere. In it, bodies enter and are regulated, meekly or interrogatingly but always within it, since they are the ones that generate it. There is no escape from the atmosphere of self.

Löw, Martina, ‘The Constitution of Space : The Structuration of Spaces Through the Simultaneity of Effect and Perception’, European Journal of Social Theory, 11, 1, 25-49, 2008