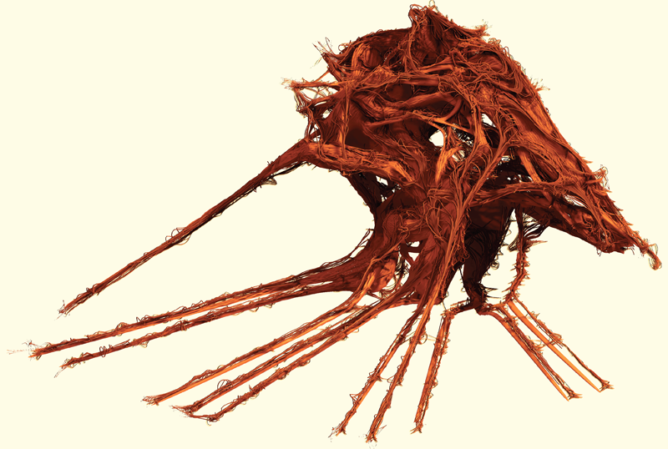 Today is Roland Snooks‘ turn to be a guest writer for the Funambulist as he generously accepted to be part of this series. His essay Fibrous Assemblages and Behavioral Composites articulates the digital research that he has been developing with his office Kokkugia and in the various schools where he taught with an investigation about the technological means to actually fabricate the output of this same research. Athough I remain critical of how the vanguard algorithmic architecture has been translated into a disarticulated mainstream in many schools of the world because of some opportunist followers, I consider that Roland’s discourse can trigger the strong interest of many of the Funambulist’s readers for several reasons.

The first one consists in the simple fact that Kokkugia’s research constitutes one of the most consistent and creative body of work in this domain.; not only it  explores the current limits of this experimental field, but it actually gives itself the means to acquire a materiality submitted to the rules of reality. The second one is that what many of us consider mainstream – for having encountered it in a certain academia – remains something inaccessible to many people because of the educational environment they are being trained in. In many schools of the world, such architectural approach are often chosen as an act of resistance against the weight of a rearguard who has been teaching year after year with no interest whatsoever for any form of innovation. Of course, this approach is far from being the only one to embody progress in architectural education and practice, but it undeniably proposes a path to emancipation in the various schools of the world which are not done mourning post-modernism (if not modernism itself) yet. A third reason finally consists in the fact that Roland Snooks has been interested for a long time in the notion of swarm that regularly comes back in this blog’s articles (see a recent one about Rimbaud for example). Three years ago he already answered a small interview (with bad questions from my end) about this research, as did François Roche and Valerie Chatelet.  I am therefore very happy to curate and host his essay that immediately follows this introduction (illustrations can be found at the end of the text):

In contributing to the Funambulist, I realize the obsessions that currently occupy my attention deviate from Leopold’s editorial direction. Experiments in behavioral methodologies and their underlying multi-agent algorithms have been the focus of my design research for a decade. However, as these techniques begin to mature and are increasingly adopted, the focus of this research is shifting to explore the fabrication implications in conditions where behavioral methodologies are extended to an extreme.

The emergence of complexity theory has shifted the conceptualization of form from the macro scale to a concern for the operation of the complex systems that underlie formation. It is from the micro-scale local interactions of complex systems that behavioral strategies for the generation of composite materials have emerged. Strategies where architectural form, structure and ornament emerge from the design of material behavior – specifically the design of behavior within composite materials.

It is the inherently organizational understanding of form offered by complexity theory which has been the basis for Kokkugia’s development of behavioral design methodologies. This behavioral approach draws from the logic of swarm intelligence and operates through the self-organization of multi-agent systems. These methodologies operate by encoding simple architectural decisions within a distributed system of autonomous computational agents. It is the interaction of these local decisions that self-organizes design intention, giving rise to a form of collective intelligence and emergent behavior at the global scale. Behavioral design methodologies represent a shift from ‘form being imposed upon matter’ to ‘form emerging from the interaction of localized entities within a complex system’.

Designing through non-linear behavioral systems challenges the hierarchies that are embedded within design processes and the architecture that emerges from these methodologies. These non-linear strategies have radical implications for the generation of architectural form, structure and tectonics. The distributed non-linear operation of swarm systems intrinsically resists the discrete articulation of hierarchies such as those within Modern architecture and contemporary parametric component logic. This is indicative of a larger contemporary shift from a reductive approach to an understanding of complex phenomena. The bottom up nature of swarm systems refocuses tectonic concerns on the assemblage at the micro scale, enabling a synthetic approach to designing across scales, from macro-form to composite material. Rather than the detail being understood as a finer resolution of the whole, it is the behavioral interaction at the micro-scale that becomes a generator of macro-level form and organization. This is a polyscalar approach in which organizational logic is self-similar and independent of sequential relationships.

The non-linear operation of behavioral formation enables architectural systems to operate within an ecology of interactions rather than as a sequential hierarchy. A potent example is the relationship of structure and ornament. Rather than consider ornament to follow or be subservient to structure, this relationship can be recast in terms of mutual influence; structure informs ornament while ornament informs structure. This enables structure and ornament to operate as behaviors within a single body of material rather than existing as discrete elements or geometries. The integration of structure and ornament within a single material has always been present within architecture, the nature of which has shifted significantly through architectural periods such as gothic, baroque or rococo. However, inherent within these movements or categorizations is the subservient nature of ornament.

With the invention of technologies such as the electron microscope, our understanding of matter has shifted from assumptions regarding the monolithic nature of material to that of material as the accretion of high populations of micro-fibers – or fibrous assemblages. The micro-behavior of multi-agent systems enables architectural matter to be considered and designed in similar ways. If systems of behavioral formation focus design decisions and matter at the smallest scale, a critical decision is the scale that generative architectural design strategies focus. If modernity was focused on the assemblage of discrete mass standardized elements (steel section beams, mullions, glazing units, prefabricated concrete panels etc), a design process focused on fibrous assemblages would have to consider the individual element to be at the sub material level – or at least at the level of the elements that assemble into composite materials. The logical extension of behavioral formation beyond the agency of geometry (strands, components, surfaces) or the agency of architectural elements (bricks, beams) is to consider the agency of matter.

Within fibrous assemblages and their fabrication as composite materials, the role of geometry is not discrete or reducible. Instead, geometry negotiates complex behaviors such as structure and ornament. Generating emergent characteristics that shift throughout the geometry as the negotiation of structural and ornamental behaviors change locally. The fibrous assemblages of behavioral composites compress tectonic hierarchies – a shift from discrete tectonic elements to highly differentiated continuous matter

An argument, and indeed motivation, for composite fiber construction is frequently premised on the desire for structural performance. However, what is posited here is not based on the desire for efficiency or performative criteria, instead it is the ability of composites to negotiate different behaviors within a continuous whole and the expressive nature of these assemblages that is of interest.

This is not to suggest that the performance of fibrous assemblages is not of interest. To the contrary, structural behavior of multi-agent systems is part of an ongoing research agenda at Kokkugia[1]. However the argument here is that structure or any other quantifiable criteria are not the drivers of formation, but merely principles that condition design behaviors. Likewise material behavior can be considered an input but not a principle generator of formation. The ability to encode material agency within strands enable both subjective design behaviors and material constraints to be encoded. The flexibility and elasticity of material can be encoded within behavioral models. The interaction of these parameters with more esoteric design behaviors enables a highly volatile generative process that simultaneously responds to the behavior of material.

While the algorithmic tools for generating fibrous assemblages are becoming increasingly sophisticated, the tools for the fabrication of fibrous composites are still largely emerging. Sophisticated robotic fiber placement techniques are being utilized within the aerospace and yachting industries. However these techniques are primarily geared to creating relatively uniform surfaces as opposed to the complex and intricate order of the fibrous assemblages posited here.

[1] An articulation of this research and an argument for behavioral structural formation is made within the article, volatile formation published in Log 25, Reclaim Resi[lience]stance, edited by Francois Roche (forthcoming).