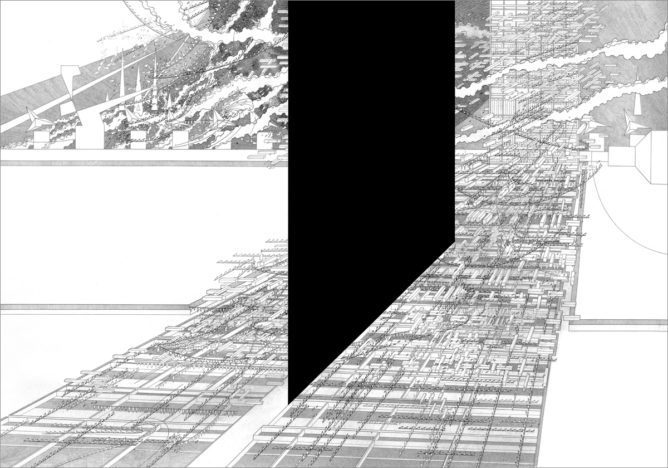 This week’s guest writer is Alexis Bhagat., co-author with Lize Mogel of An Atlas of Radical Cartography (Journal of Aesthetics and Protest Press) whose  upcoming Spanish publisher is nobody else than our friends of dpr-barcelona. Alexis’ essay is written in the form of questions to the artist Seher Shah who already kindly agreed to write her responses in another guest writer essay that should be released soon.
In the following text, through the  second question addressed to Seher, What does it mean to draw like an architect when architects no longer draw? Alexis explores the recent history of a shift of paradigm in the architectural practice, and more generally in the various forms of signifier and symbols. He indeed describes the evolution from the systems of representations that used to use the material mark of a tool (pen, pencil, ink etc.) on a piece of paper and the birth of a new system of representation, whether what is represented involves architecture, cartography, or simply literature, that digitized (and therefore complexified the intermediary translation between the intent and the output) this process. In an interesting move, Alexis explored the history of the company Autodesk which developed the software that allowed such a paradigm to shift in the realms of architecture. As he suggest the presence of a new paradigm is problematic as the movement that embraces it forgets to question it at the same time, resulting in a lack of criticality that can be lethal to a discipline if it lasts.
This paradigm problematic is indeed relevant to Seher Shah’s work as it interrogates and reinterpret paradigms as much in its form than in its contents. We look forward to her responses which probably won’t constitute  real answers, but rather means to go further in this exploration.

In her drawings, artist Seher Shah explores the forms of Modernist abstract architecture with a sensibility that is both nostalgic and critical. She employs basic elements of architectural drawing–the column, the grid, the wall–to fantastically render the ruins of imposition.
In her recent exhibition, Object Anxiety, she stripped Le Corbusier’s Unité d’Habitation of height, weight and mass, turning it on its side to create a plane. Her new series of drawings to be exhibited in Brute Ornament at Green Art Gallery in Dubai next month, zoom in on this plane and manipulate its forms in a series of further deconstructions of Unité d’Habitation.

(1) What is Object Anxiety?

I know what these two words mean separately, but I can’t get a definition when I add them together. I assume that by object you mean a thing we are thinking about or “that to which thought is directed”; and you do not mean to “to raise a point in opposition.” But what becomes of that thing when you pair it with Anxiety? Anxiety, being a state of mind, a feeling of distress, can only belong to the subject, the agent that thinks, the one who is thinking about the object. Is this a concept that you would like others to use? Or is this just word-play, a difficult combination of terms to remind us that the object is also a subject?

Looking at Object Relic with Object Anxiety in mind, I can’t help but identifying with the building and beholding a dark fantasy: stripped of the pride it once exhibited in proposal drawings and debut photos, it is terrified that it is without structure, nothing but facade, about to be sliced in half by piece of black paper: anti-matter of the white-paper on which it was born. A perpendicular plane from a parallel universe rushing into the object’s world with everything that was unknown, unexpected and unrecognized during conception.

(2) What does it mean to draw like an architect when architects no longer draw?

Drawing converted from M9900 INTERACT to AutoCAD-80 … used it on the sample drawings disc for the first AutoCAD release. 1982 i

I know I must qualify the question because, Seher, you will say that I’m exaggerating–that architects still draw, they always draw. I admit that, nevertheless the simple truth is that drawing on paper is not part of the order of the world anymore. Do you accept that fact? Do you accept that drawing by hand has been subjugated in status, to become a minor part of the tradition, like carved vegetal ornament?

I certainly am not exaggerating. Consider for comparison Friedrich Kittler’s exaggerated argument that this blog post that you are reading is not even “writing,” that

“The last historical act of writing may well have been the moment when, in the early seventies, Intel engineers laid out some dozen square meters of blueprint paper (64 square meters, in the case of the later 8086) in order to design the hardware architecture of their first integrated microprocessor. This manual layout of two thousand transistors and their interconnections was then miniaturized to the size of an actual chip, and, by electro-optical machines, written into silicon layers.”ii

Kittler’s hypothesized termination is the death of a great old tree of meaning where “writing” includes all varieties of mark-making by the human hand, be they symbols, letters/glyphs or lines sketched (that is, “quickly outlined”) or drawn (that is, “pulled-along, pulled-out”). This “end of writing,” which perhaps more accurately marks the end of the Gutenberg Age, announces a new future for “drawing,” albeit with the mouse, sensor pad, digital pen, trackball, finger.

Drawing on paper, professionally, is over in our century. The origin of every drawing has become a model, held within a computer. John Walker, the founder of AutoDesk, summed it up succinctly at the opening ceremony of their Swiss office in 1988.

“In 1982, Autodesk undertook the challenge of placing computer aided design in the hands of every engineer, every architect, every draftsman, surveyor, and designer in the world. The story of Autodesk is the story of our progress, to date, in achieving that goal. What we do at Autodesk is so simple to understand and so easy to explain that sometimes it goes past so quickly people don’t comprehend. Autodesk products build computer models of real-world objects, then manipulate them in various ways. … The past two decades have witnessed the digitalization of one aspect of technology after another. The word processor digitalized the typewriter. The compact disc digitalized the phonograph. The facsimile machine is digitalizing the mail. Within the next few years photography, radio, and television will be digitalized. Autodesk is engaged in digitalizing the world of design, engineering, and manufacturing. To do this, we develop tools to create, inside the computer, faithful models of the objects that designers conceive. Our products are the link between the designer’s mind and the memory of the computer. Once a models is built, we can use the computer to prepare drawings for a machinist or construction worker. We can analyse the design, inside the computer, calculating weight and strength, permitting the designer to explore alternatives before the object is manufactured.” iv

John Walker and his cohorts at Autodesk did not push the drafting tables into the dumpsters, just as CIAM did not destroy the guilds of the pre-industrial West. “The collapse of the class of skilled craftsmen is an established fact,” CIAM said at the outset of the 20th century, and so with hand-drafting at century’s end. The practice of architecture was one essential aspect of the grand century for paper that saw ancient forests plundered from Cascadia to Brazil to Borneo, while new forests grew in the interstices of American Industry and the ruins of the Great War in Europe, waiting for their planned day to be cut down and shredded to pulp. CIAM’s call for “outmoded conceptions connected with the class of craftsmen” to be abandoned, implied that the privilege of the design profession would be enhanced. New! Rational! Forms! for the Machine Age were designed on paper, tested on paper and transmitted to the factory on paper. Skyscrapers and office towers were designed on paper and communicated in so many detailed construction documents to their builders. Lewis Mumford likened the office buildings of the 20th century to “enormous human filing cabinets,” ant-farms for a class of people who were once jokingly referred to as “pencil-pushers,” who moved in and through a world of paper, drawings and type. Men and women who sat at desks where they drew and wrote, storing their pieces of paper in flat files, file cabinets and card drawers. Our new century scarcely remembers the standing armies once assembled simply to pencil in colors and affix Letraset. And we can no longer imagine how papers once flew “at the speed of air” from skyscraper to skyscraper through pneumatic tubes.

Map of the Pneumatic Post network of Paris, 1971v

Maybe now you are more certain that I am exaggerating? Well, let me explain my question a little bit further: perhaps then you’ll answer, at least as a thought experiment?

I am wondering what happens to architectural drawing when it is divorced from architecture–when the art of 2-dimensional representation of a building on a plane (is there a short name for that?) is divorced from the art-science of design of structures. With increasing pace since the end of the Second World War, the computer has driven the hand from a broad range of human endeavorsvii For some perspective, consider cartography, another practice of drawing effected by digitization. Geographic Information Systems, or GIS, first appeared in the 1960s, coordinating the science of geography with statistical analysis and database management. GIS began as a form of data-coordination and crunching, but soon enough led to the coupling of geography with CAD and computer-graphic visualization—making possible the production of maps from computer models. This decoupled geography from the art of cartography. In the 1980s, while techniques of visualization were taking shape, digitalization drastically simplified what maps were and what cartographers did to their their most elemental levels. While cartographers and computer programmers refined conventions for communicating GIS data, the art of cartography atrophied under the restraint of convention and the banishment of the hand. This period was summed up by Brian Harley’s in 1989: “I believe a major roadblock to understanding is that we still accept the uncritically broad consensus, with relatively few dissenting voices, of what cartographers tell us maps are supposed to be.”viii

By the early 21st century, conventions had been established and graphic visualization had capabilities unimaginable in the 1980s. The art of cartography could be re-united, in the digital domain, with the science of geography. But the divorce had changed them both. Cartography had, as Mark Monmonier once put it in a panel discussion, “lost its art.” And that art—of making meaningful pictures of the world—had been picked up by artists, untrained in the conventions of geography, growing into the boom of cartographic art that we have seen these past 10 years.

Architecture must have gone through similar shocks in the shift to computer-based production, but upon examination I do not see analogous results. Artists, rather than picking up architectural drawing have seized upon the forming aspect of architecture: Temporary Structures, Ubitiquitous Site, the whole tradition of installation. As Hunderwasser said “Architecture was the aim the whole time.” It is easy to miss this because the shift of practice from two-dimensional representation to the formation of space itself was so broad and generalized.

Which leads to this question, for you, Seher Shah. You draw. You draw like architects used to draw, repurposing visual convention for your own interrogation of the tradition. And I haven’t seen anyone else draw quite like this. So I wonder what it means, for you.

I look forward to your responses. Perhaps Léopold will publish them here?

vii Tangentially: iPhones are still made by hand! So the elimination of handiwork is admittedly incomplete.

viiiHarley, in Jeremy Crampton, Mapping: a critical introduction to cartography and GIS (John Wiley and Sons, 2010)